The New York designer has been working with denim for nearly 50 years. Here, she revisits hanging with Hendrix in the 60s, the women’s movement and OMO, and how jeans played a role in all of it.

“I wear denim a lot when I’m designing the collection because denim is not clothes to me, so it doesn’t compete with what I’m making. When I’m designing, I always look at the mannequin or the drape form in the mirror to get perspective, and then, if I’m standing next to it, and I’m wearing denim, I’m not working against what’s on the form.

I’ve always loved accessorizing my jeans in unexpected ways. I have a huge jewelry collection, of costume jewelry from Hollywood films – like, Joseff of Hollywood’s huge, mammoth pieces; I’ve had them since the 60s. I used to have a loft with high ceilings, and I would have all of my red stone jewelry and all of my green stone jewelry hanging together by color on the wall, and I had a long pick, and I would get them off the wall with the pick. I wore jewelry so much back then. The weight that I carried! 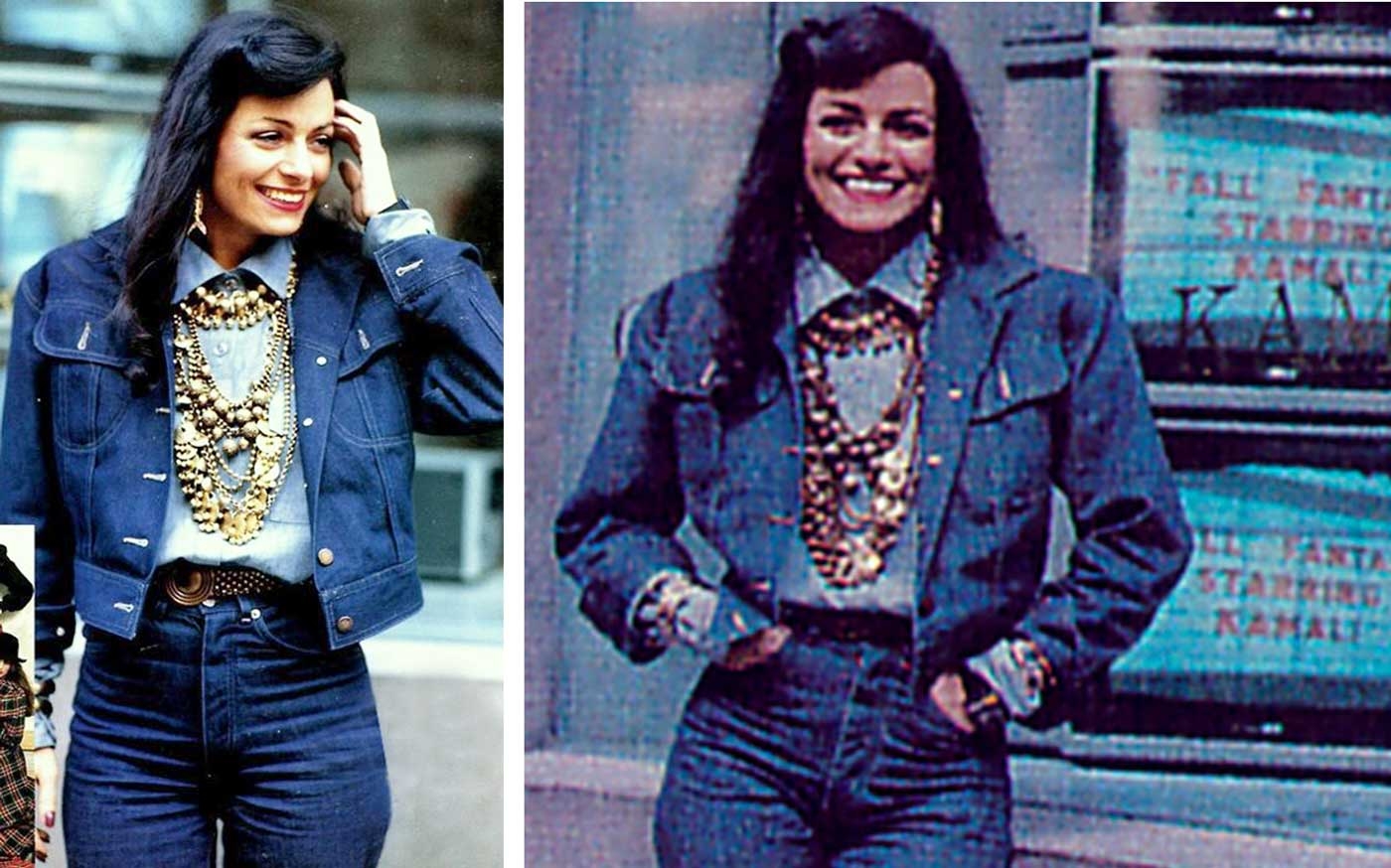 Designer Norma Kamali, in jeans and a jacket that she made, with jewelry she collected. “The whole deal is mine, the shirt, the whole thing,” she said. “It was 1983 and so I had just bought my building on 56th Street when these pictures were taken.”

When I turned 50, I came to terms with all of my possessions and the things that I had collected, and I felt that they were really standing in the way of my creativity. I was living in this beautiful, restored brownstone and it was extraordinary and I had all of this furniture that I was making, and I had warehouses of stuff, and 20,000 pieces of clothing, vintage…and I just said, I gotta get rid of it all. And I did. I haven’t collected anything since then. Actually, the only thing I didn’t sell or auction off or give away was my jewelry because I think I want to leave it to somebody, but I don’t know to who, yet. It’s something that is better as a collection, instead of in individual pieces.

I would say there are times I have a lot of denim in my collection, and times I have less, but I always have denim. It’s American. And I am an American designer. And I am not a big wovens person – I’m mostly into knits – and so denim has been my woven. It’s more like a fabric that I design into, just like any other fabric I use. You know, I’ve never seen myself as competing with Levi’s, so I’m not in that zone. I like combining denim with other fabrications in a garment, and so I’ve mixed it with so many things. 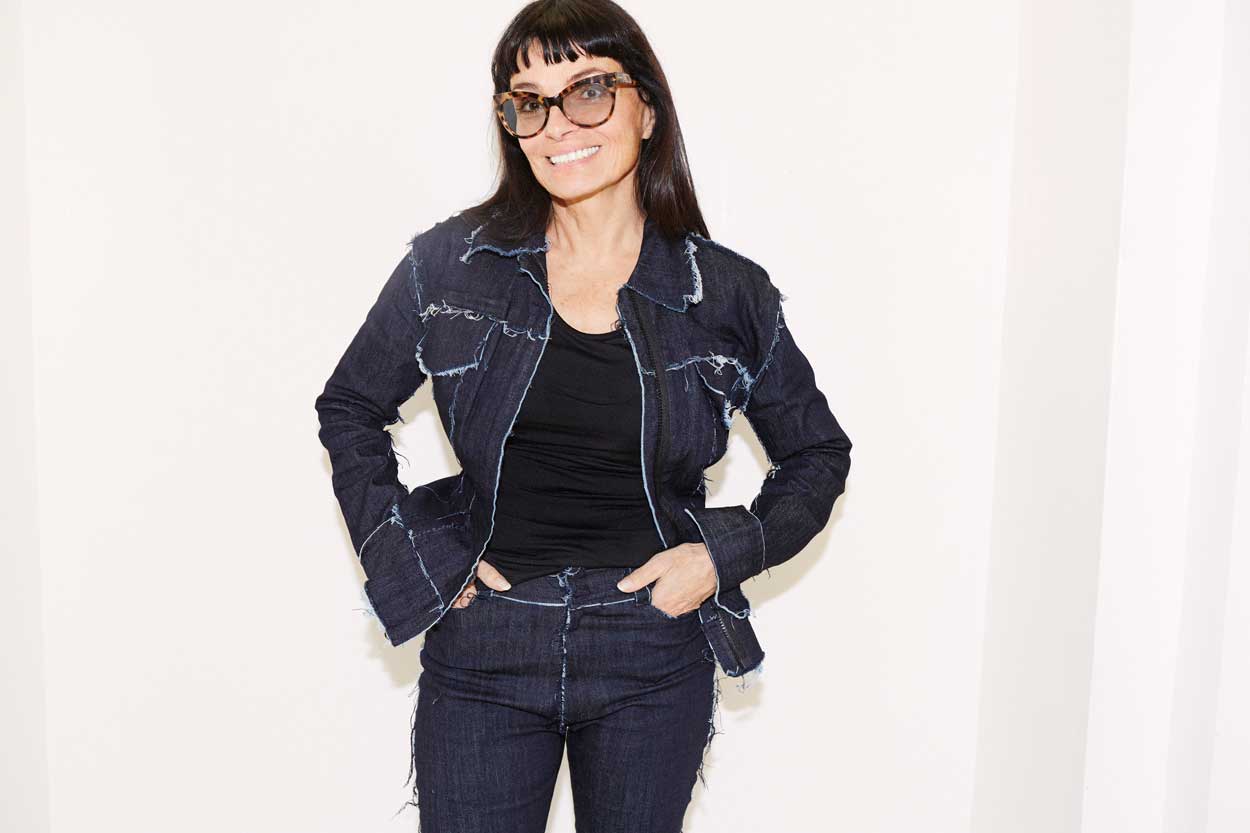 The designer wears pieces from her current collection, featuring shredded seams and the tiniest bit of stretch. Go to normakamali.com.

I started in fashion in 1967, so I’ve gone through several decades in denim. For me, personally, my memory of denim is this: In the 70s, I had a gorgeous boyfriend who had a VW van, you know, that said ‘Keep on Truckin’ on it, though he was mostly into the Allman Brothers, and Southern rock and blues. We would go camping, which is when I made the sleeping bag coat, literally out of my sleeping bag. But in every picture of me that I have ever seen from that time I am wearing a pair of this boyfriend’s jean shorts. Again, this was the early 70s.

Now, in the 60s I was wearing a girdle, seriously, so this was a time of a lot of transition in fashion and life. The 60s was ‘Mad Men.’ I felt totally out of sync with everything then. I hated the look, I hated the matching hat and the bag, hated it! And I was going to London every weekend at that time because I couldn’t find a job in fashion that I wanted to do – I just didn’t like any of it. The whole Jackie Kennedy look, I just hated it. So, I decided to travel and see what was going on in Europe. I went to London first. And then, for $29 roundtrip, I flew to London every weekend, for four years – I was so with it. I felt right in sync with what was going on there. I’m talking meeting Jimmi Hendrix and going to Portobello Road with him to buy [Babatunde] Olatungi albums; meeting the Spencer Davis Group in a hotel lobby and going on tour with them around different airplane hangars where they would give these concerts… The clubs were so amazing! I spent the work week in New York and the weekends in London. I was in two different cities living two different lives. That was probably the best time in London that I can think of. But London wasn’t really about denim, and so, it wasn’t about denim for me in the 60s because the influence was British, not American. 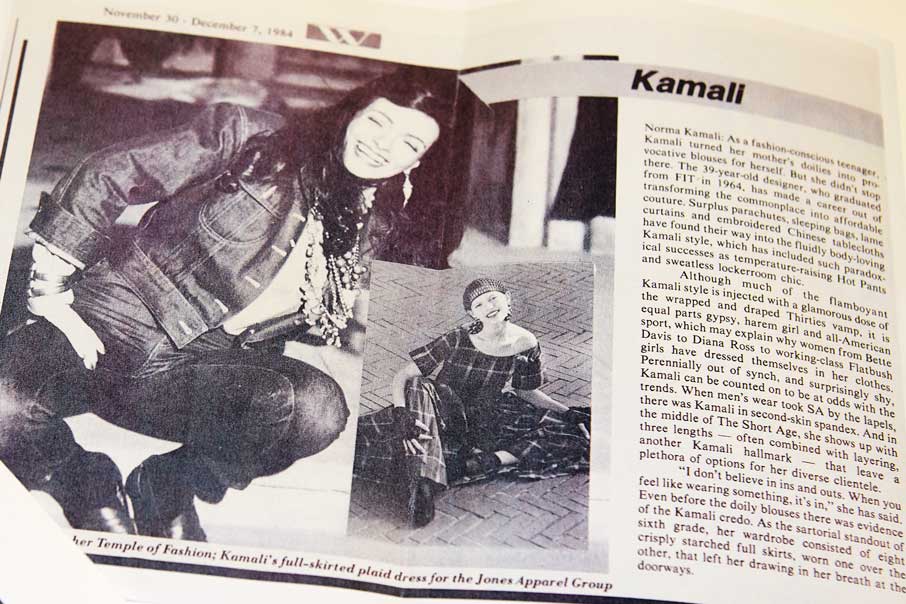 Later, I started to get more into fashion, and the 70s came and the message was this: take off your bra, don’t wear underwear, be very relaxed, be anti-everything, and denim was the statement for that in such a big way. Denim was American, and on the west coast flower power and that laid-back totally loose look was denim. As the American fashion statement started to take over and become more important, so did denim. I remember, was doing hand-stitched patchwork denim back then. Tons of patchwork velvet on top of denim, mixed with embroidery stitching. I did a sofa upholstered with a denim-and-velvet patchwork, and when friends would come over they would help me sew…and we’d talk and sew. I had denim jackets that I embroidered with birds and appliqués everywhere. Tons. And I used to do them for clients – really elaborate, hand-stitched embroidered jackets. Everything then was by hand. 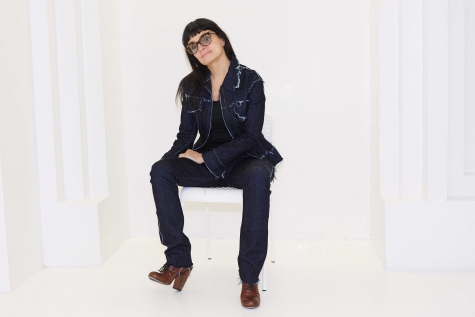 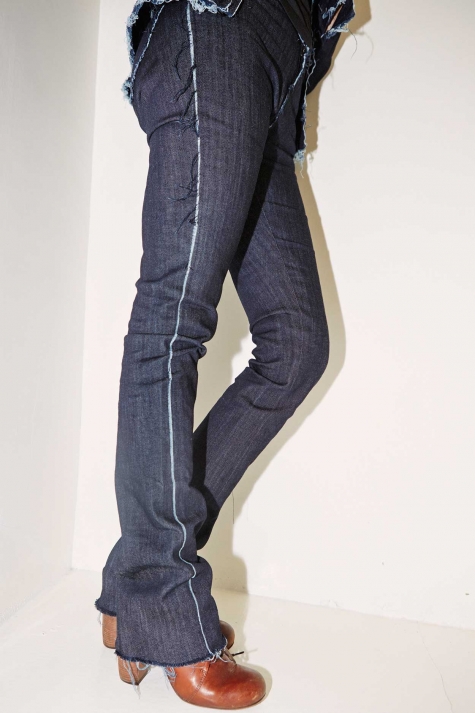 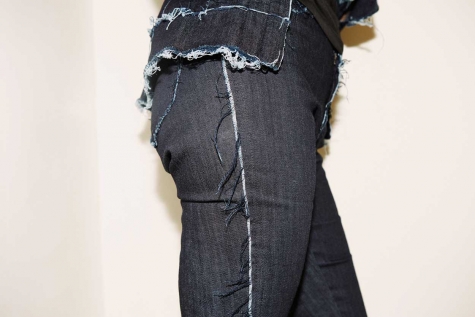 “This is one of those styles that keeps perpetuating itself,” Norma said about the shawl collar coat she wears here. “It doesn’t ever get out of style, and it just works.” $500, go to normakamali.com.

Right when this was happening in fashion, the women’s movement started, and I was leaving my husband. We were partners in our business, and it was a very big deal at the time. I didn’t even realize what was happening, but I was suddenly ahead of the curve by saying, ‘I can do this. A man doesn’t have to define me.’ I started the OMO Norma Kamali line [OMO stands for On My Own]. Then, all of the sudden I started getting letters from people, like fan mail, and I’m thinking, ‘Wait a minute, I didn’t know I was leading this parade, I’m just trying to get out of a really bad marriage and have a business.’ But in a lot of ways, this kind of self-expression and independence was synonymous with wearing denim. Bellbottoms, bellbottoms, bellbottoms. Extra long bellbottoms that dragged and got worn from scraping on the floor, with bare feet, or sandals. Bare feet a lot!

And that’s when I met this guy with the VW bus who was a carpenter – he did all of these amazing things with wood – and we went camping, and did a lot of very free things. I don’t think I wore underwear for a minute all through the 70s [laughs]! But in every picture from that time I’m wearing his short denim cut-offs. Probably they were Levi’s. Or Lee. I liked his cut-offs because they were really broken in. They were always made from jeans he wasn’t wearing anymore – he’d just cut them – and they were really baggy on me, and great. With big platform corkies, and t-shirts, and that was it. The boyfriend wanted me to move to Colorado with him, but I couldn’t, you know, I had this other thing going on that was my business. 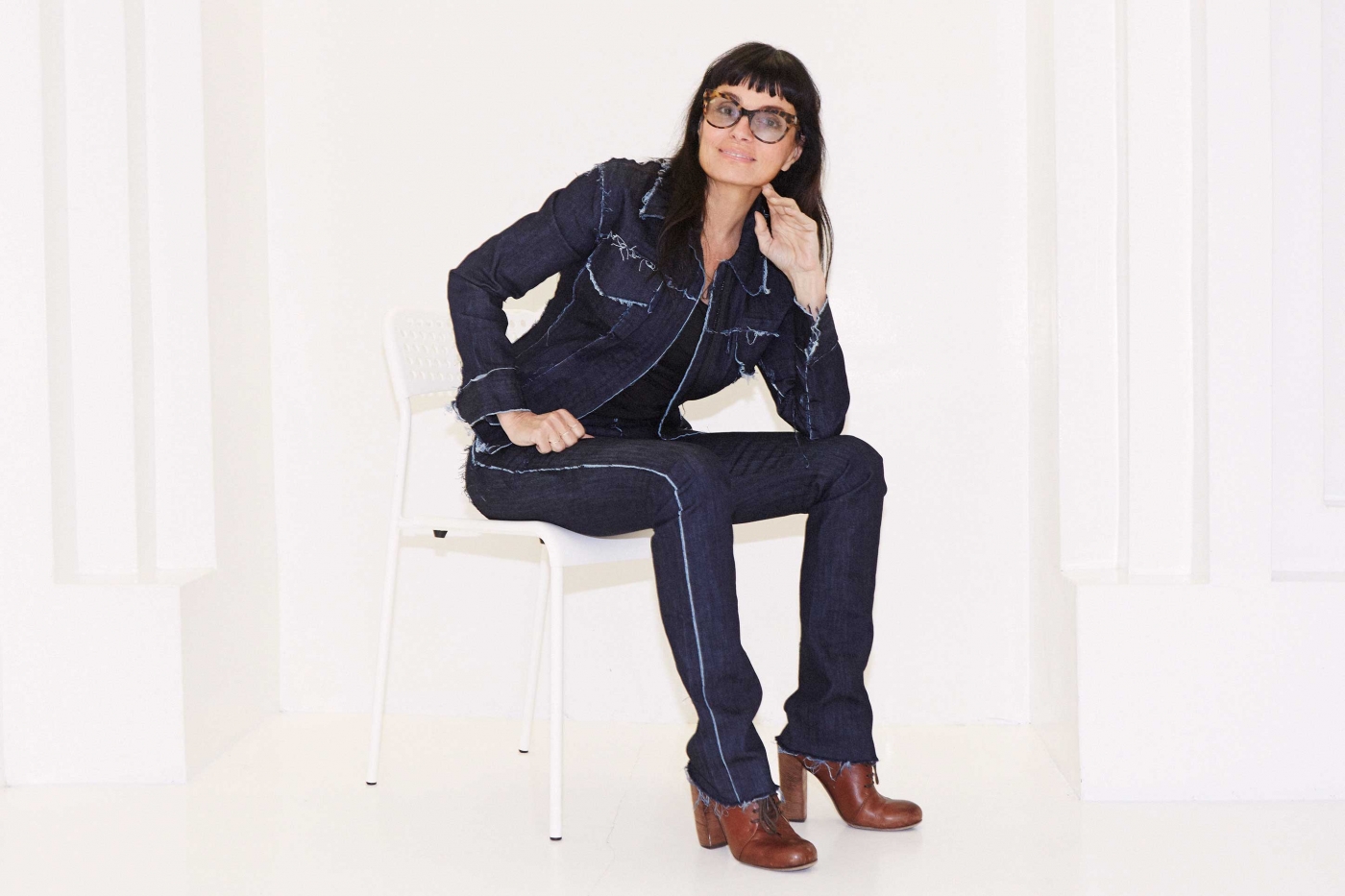 I’ve always worn jeans and I wear jeans all of the time now, too, even to cocktail parties. I hate red carpet. I can’t look at it anymore. Not because I don’t think the clothes are spectacular, but… To me, there is nothing chicer than wearing the unexpected, like denim. I recently went to this special party… The guy I am with – and I think he is my soulmate – he is sort of conservative; he has a very serious job. But so, we went to this party, and I wore jeans. It was truly not what you might think would be the appropriate event for jeans [laughs]! Some people were in black tie. But I wore denim on the wrong side of black, so it was gray, so it was a little chicer, and I had an old pair of heels with stones all over them, so they were very bling against the denim. I had this gray terry thing over it on top, and I felt so comfortable. He was like, ‘You are not wearing jeans,’ and I said, ‘Yes I am.’ And I did. And I felt like I was dressed up, and just so me, and right.