Rare are the things in our closets that we wear consistently for more than a year or two. Think about it. We keep things. But it’s unlikely we’ll put the same item on nearly every day for years and years, as jewelry designer Irene Neuwirth has her Genetic Denim jacket.

We knew that Irene doesn’t wear jeans, proper. In pictures and in person we’d only ever seen her in skirts and dresses. And yet, we still associated her style with our favorite blue fabric. Why? Because, without letting it make a statement or steal the show – a signature look made by mixes of prints and bold bijoux – Irene has had her Genetic jacket on or close by her nearly every day for the last seven or eight years (she’s lost track). In other words, if you’ve seen Irene lately, or not so lately, you’ve probably seen her jacket, too.

Irene, of course, has exceptional taste. Her jewelry bewitches: eyes widen, the breath quickens, and confusion – how are these gemstones even real? – ensues at the site of it. Her home on a canal in Venice, California is bright and beautiful and, like her closet, full of romantic color and prints. (We don’t do closets here at Jean Stories, but Irene’s almost had us reconsider our resolution). The only solid in any given outfit, her jacket is like an anchor. And if it were’t so good at getting out of town – it might be the second thing she reaches for when wanderlust strikes, after her passport – we’d call it exactly that.

Let’s start with the facts: what is your jacket, and where and when did you get it?

My jacket is Genetic Denim and it’s the only denim jacket I own. I’ve literally had it for eight years, seven years… I don’t remember exactly where I got it, but it’s been my one staple. Even if I’m super dressed up, I put on the jacket. It’s my thing.

So if you’re always wearing the jacket, do you ever wear jeans, proper?

You know, I don’t really wear jeans. Occasionally, I do. When I’m feeling extra skinny [laughs]. I’ll wear jeans when I travel because they’re super comfy. I have a pair of Golden Goose jeans – they’re red, they fit really well, and they’re not low-waisted.

I usually wear dresses, and I wear a lot of prints. And so I think that a little denim jacket is cute with that. Prints and something with a waist. That’s why this jacket is so great: It’s the perfect length, it hits me right at my waist, and it looks good with everything – skirt, patterns, jewelry. I like the way that it fits – that it’s shrunken and also a little stretchy and even when I first got it, it looked a little old. It’s a total classic. Doesn’t everybody have a jean jacket that’s, like, their classic? 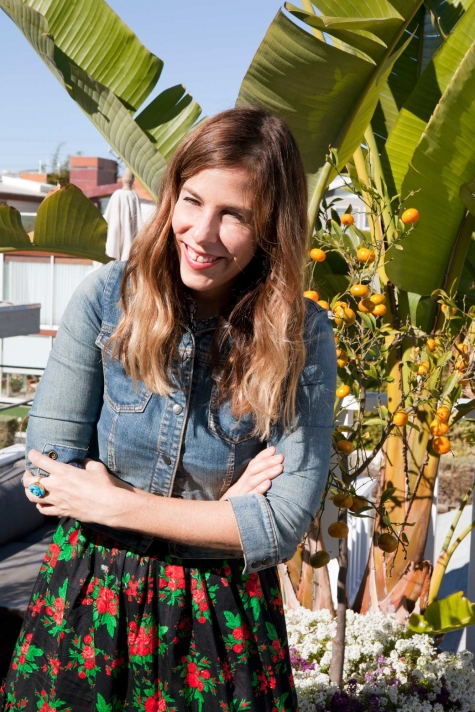 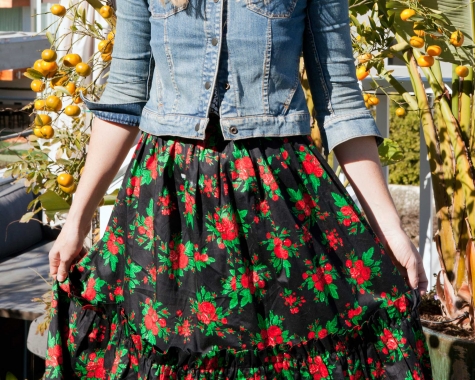 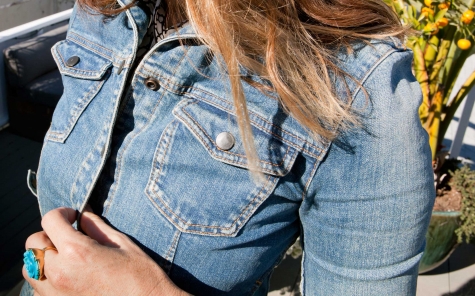 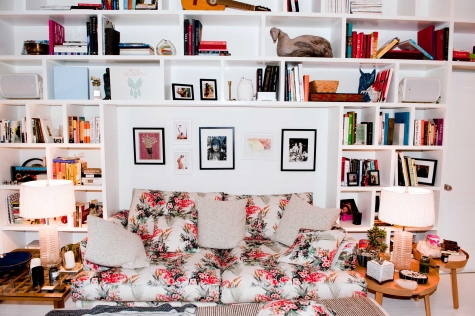 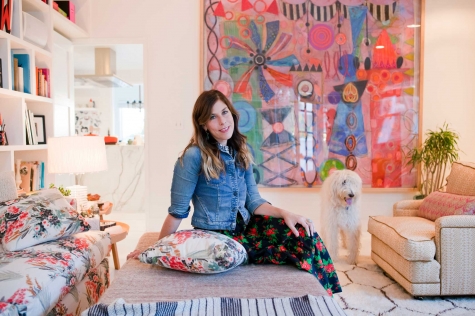 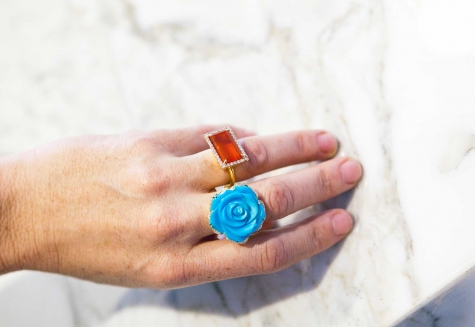 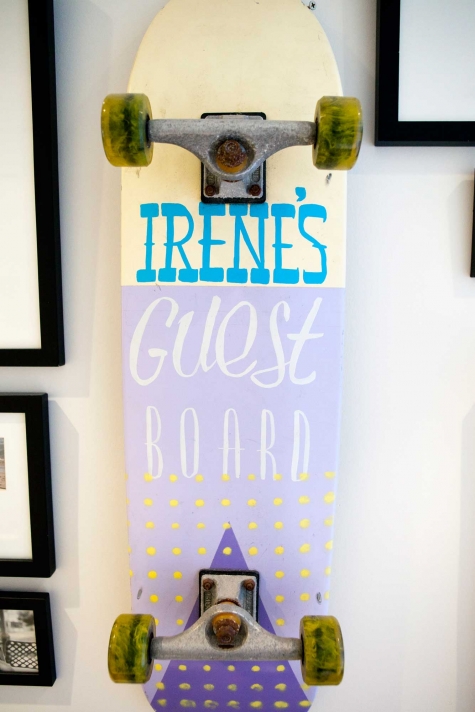 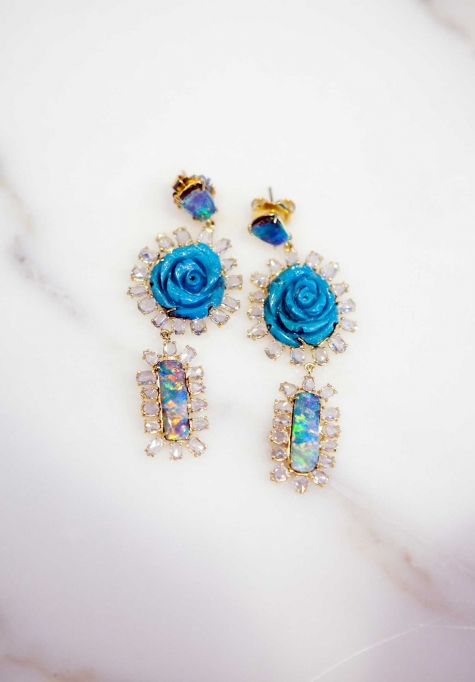 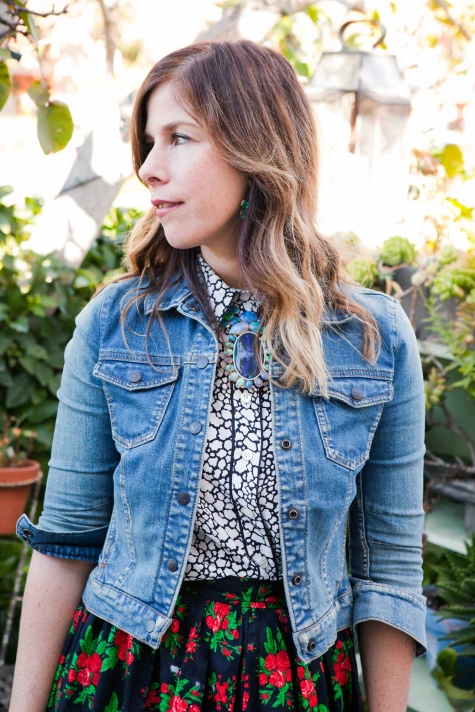 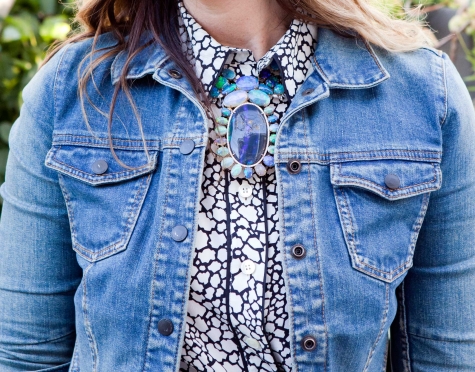 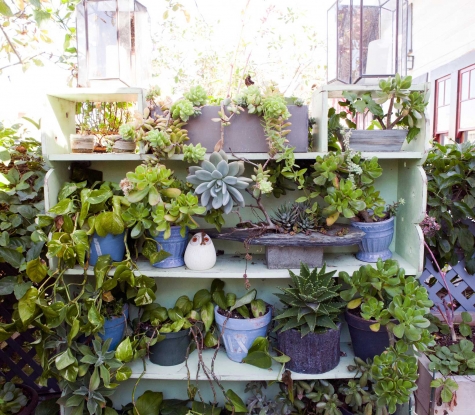 If you’ve had it for almost a decade, you must have some great memories attached to it.

I guess I’ve been wearing this jacket during most of my years in business – I launched 10 years ago, but it really picked up seven years ago. Living in L.A., it’s the perfect weight; you can wear it as a layer in the winter. I’ve had many fake heart attacks over the last five years, thinking I’d lost it and, Oh no, it’s gone and I’ll never be able to replace this exact same one! Not that that would be the biggest crisis in the world, of course, but it’s probably the only piece of clothing that I feel that way about. I’ve had millions of dresses and skirts and jackets, but this is my one piece that’s been with me for that many years – through breakups and new boyfriends. You know, my style has always been the same. Even in pictures of me as a kid I was always wearing crazy prints and flowers. When people interview me about fashion, I always think it’s a bit of joke. I have no idea – I just love color and funny patterns, always.

So, how does the jacket fit in, with all of the print and color you wear?

I like that my jacket is the one solid, because everything else is so crazy. My clothes, my art… Everything kind of looks the same and then there’s this jacket. I have no black clothing, I have no solid colored clothing. Friends will suggest that I buy basics, and I’ll go out and buy one, and then be like, Why did I buy this? My basics are the crazy things, and my crazy things are my basics. I’ve just decided to stick with skirts and dresses – I’m super curvy so it’s better. Better than pants on me.

We know that you travel a lot – for work and play, equally. This seems like the perfect go-anywhere piece. Is it?

I do. It is! This jacket has been with me everywhere – any memory, it’s probably been there, which makes it hard to remember any of them, of course. But it has come on a lot of trips with me.

My boyfriend is a director and has been on set in Puerto Rico and in New Orleans, so I’ve been going there to visit him a lot lately. Wouldn’t leave L.A. without my jacket. I think this was the only jacket that I brought with me when I drove all the way across Northern Spain. I wore it in Greece this past summer, when I went to Patmos for 10 days with Ileana Makri, the jewelry designer. That was a big trip for me; it was like planes, trains, and automobiles to get there. It took me 27 hours. I flew from L.A. to London to Athens, spent the night because you can’t get to Patmos unless you get on a boat at night, and I’d missed the boat. So, I spent the day in Athens, then took an eight-hour boat ride overnight. I brought a million dresses and this jacket. The food was amazing. Ileana is amazing. That was a really fun trip. I hadn’t been on a trip like that by myself in a really long time, if ever. It’s character building, I think, to do that.

Has your jacket ever saved the day during any of your travels?

Well, I had this jean jacket when I went through this bad break-up years ago. I needed to get away and a friend just said to me, Go, get on a plane, take a flight to León in Mexico, I’ll have a car pick you up and you can go stay in my casita in San Miguel de Allende. And I was like, Where is that? It was right before Phil – my now-boyfriend – and I started dating. But I had my passport in my safe at the office, had this jacket with me, a dress or two, everything I needed, and I left straight from work.

Getting there was a nightmare – red-eye, car accident – but when I arrived it was worth it. The most beautiful house I’d ever seen. Later, I walked into the town square and there was this couple sitting there with their dog. And she was like, I like your earrings, and I said, Thank you, I like yours, too. And she said, I made them, and I was like, I made mine, too. We started talking and she offered to throw me a cocktail party and I said, Okay, why not. She owns Cumberland Island off the coast of Georgia and she lived in an old tortilla factory in San Miguel that was amazing. And I wore this jacket to that party. I had the most incredible time, and I went back, like, two weeks later, and now I go to San Miguel two or three times I year. I spend Christmas there every year. I was just there, actually – and I took my jacket!