The first time stylists and denim designers Emily Current and Meritt Elliott worked with Los Angeles photographer Hilary Walsh they were making the very first lookbook for what was then – in 2008 – their brand-new jeans company, Current/Elliott. “It was kind of like making a first album,” adds Current. “Just years and years of ideas in the making.”

Current, Elliott, and Walsh would continue to work on shoots for Current/Elliott (from which its founders have since moved on), and other projects. Their extensive body of work (thus far) is found in A Denim Story: Inspirations from Bell Bottoms to Boyfriends (Rizzoli), a gorgeous collection of the images and tales inspired by and born from the trio’s creative collaborations. “The way that we work is really what inspired the word ‘story,'” says Elliott. “With Hilary, we might say, There is this girl, and she landed on a farm and raises baby goats. Or, we want a kind of old-time-y dustbowl era feel, but in the circus,” says Current about their process. “At the end of the day a jean is just a five-pocket jean, but the stories you tell with them are what bring them to life,” says Elliott. (You’re speaking our language, ladies.)

There is, in fact, a chapter in the book called Circus…and one called On the Porch, and War & Peace, and Boyfriend, all of which are recurring themes in Current and Elliott’s collections and work. There are also a number of vintage photographs – images that capture the not-so-overt sexiness that girls in jeans can evoke, and that all three women love. From the Current/Elliott originals to how the cover came to be, here is the jean story on A Denim Story.

FROM LEFT: Hilary Walsh in her 10 year-old A.P.C.s with her laying hen Maggie; Meritt Elliott in her vintage Levi’s. “I love the awkward length,” she says; Emily Current in Golden Goose jeans.

With all of the denim that’s out there in the world – and the three different ways that each of you wear your jeans – where do you find common ground?

Current: Meritt and I had worked together for a long time when we first started working with Hilary. And immediately, we were like, How did we meet someone with the same points of reference? If we brought something up – a picture or an image in culture or fashion – she’d get it. If it was denim or not denim. But I think part of what connected us initially was that we loved denim, but also that we loved the same kind of denim. We didn’t love the sexy overt side of it. We loved the boyish side of it and how sexy a girl was in that.

Where did you begin with A Denim Story?

Elliott: Emily and I use a lot of the same imagery our shoots, and how we dress people, and how we designed. We’d been collecting these things, and just thought, Wouldn’t it be cool if we could put it all in a book?

Walsh: We did a few shoots, not specifically for the book but with the book on the horizon, that had nothing to do with Current/Elliott the company. And those and the actual Current/Elliott lookbook shoots are a large part of the book.There are some editorial pictures. And some of my own photos. Originally, it was going to be a book with just my photos. But it’s kind of hard to do a book about denim and not include really classic pictures.

Current: Yeah, there are a couple of really iconic images – of Marilyn Monroe and James Dean – but we tried to find images that really inspired us and looked like our aesthetic. One of my favorites is of Marilyn Monroe on the bench press. She is so coiffed but she is so tough, and I love the burly idea of bench pressing in jeans. It’s sort of really masculine and really feminine, and it kind of all comes together in that photo.

Do you know the back story on that photograph?

Current: It was taken on set. And her makeup artist took it, I think, right? They were just messing around.

So it happened in the moment…

Walsh: As much as I didn’t want to use that many pictures of Marilyn, she kind of is our girl from the 50s because she wore the boyfriend jean back then. When you’re looking for pictures of jeans, there’s a lot of her.

Current: And I just love – I mean, I’m wearing red lipstick and jeans today – but I just love the idea of really glamorous girls in really burly jeans. There’s something so great about it, still.

Tell about how the book is organized – where do the chapter themes comes from?

Elliott: Well, a lot of the chapters are based on things that we have shot before, or themes that we like and shoot a lot. One of them is just called Girls. We see girls differently – they’re feminine and sexy, but maybe who most people design denim for. Our girl is very childlike and playful and unexpected and has interesting proportions.

There’s another chapter, On the Porch, and it captures this idea of just wearing jeans that haven’t been washed, and sitting on the porch telling a story, maybe you’re mending the bottom of your jeans and you’re sitting with your friends. That sort of aspect is what we like. We shoot on porches.

What does the War & Peace chapter refer to?

Current: We were thinking about hippies and the military and how those silhouettes influenced us, and that sort of imagery and 70s-ism…we don’t love all of the 70s denim imagery, but we found some really unique imagery of patchworks and holes and bell bottoms and naval pants…

Walsh: Home on the Range is another…

Elliott: Because we love a farm…

Current: Yeah, we love a farm…

Walsh: I mean, not to be too heavy about it, but those were the themes that we were gravitating towards always with Current/Elliott.

Elliott: Because they make sense with denim, but they’re not too denim-heady.

Images and stories from A Denim Story… 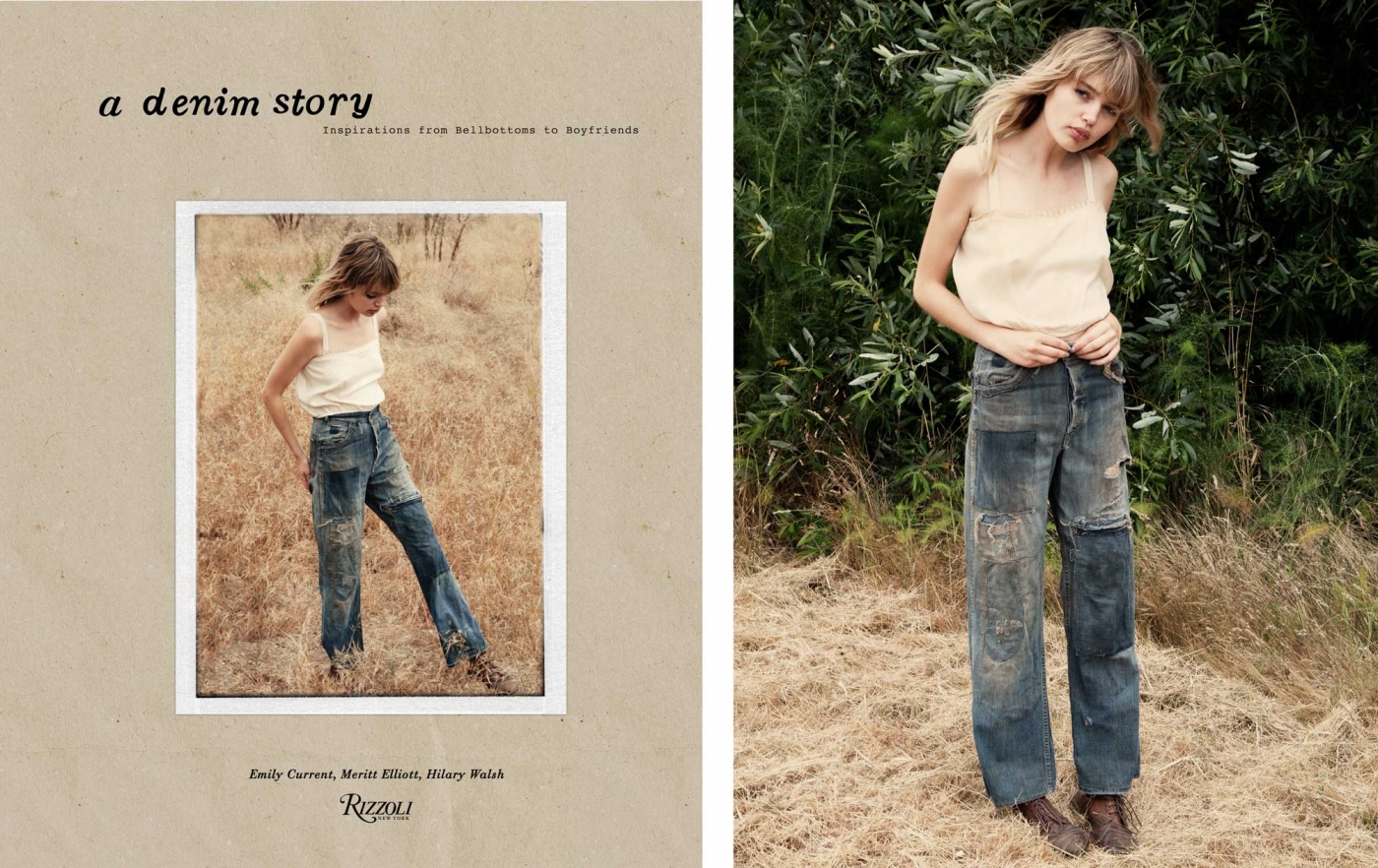 Elliott: I think the best jeans that we shot are the ones on the cover, for sure.

Current: Those are the best jeans. They’re high-waisted, ridiculous, patched-up-falling-apart wide-legs. They’re so good. There’s no tag; they were probably some army-issue situation. We got them at a costume house.

Walsh: The book was finished when I shot the cover, actually. I just went running around all of L.A. shooting in various places. We all knew what we wanted. I guess my favorite from that day is the one that opens the chapter called Girls (right). Too bad we had to give those jeans back.

Elliott: One day Hilary just said, ‘Come over, I have this great model her name is Lanna,’ and so we just brought some things over that we’d wanted to style and shot all of this at Hilary’s house…

Current: We had all of these big Navajo blankets and head dresses…and lots of vintage denim, some that was our own.

Elliott: Yeah, we all just got together and played that day.

FROM LEFT: The Overalls chapter opens with this picture of model Lanna Lyons; Masks and costumes are recurring themes in the trios work. “Especially in the summertime when we are all at our most playful and irreverent in our dress and disposition,” reads the caption. All photographs by Hilary Walsh.

A Denim Story (Rizzoli; $23) is on sale March 18, and available for preorder at amazon.com.