What happens when the ones you love start to fall apart?

In any event, my favorite pair of Sevens is/are about to bite the dust. They were a little distressed to begin with, that was part of their thing, pale, stone washed, white threads, and the barest beginning of what might be holes someday. But that was also part of their charm.

I think it was a week ago, for some inexplicable reason my right index finger found its way to an itch or something, right below my hip, high up on the right side of my right thigh and there was actually a hole in a place where you really don’t want a hole. Thinking forward – to when the hole is/will be irrefutably, irrevocably larger – this is not a cute place for a hole, at all.

I love 7 For All Mankind. I know my size and I don’t even have to try them on. They just fit me. Sometimes you find a jean like that. Having said that, I also really like going to the Seven brick-and-mortar store because you can actually see/touch the color and the texture even if you’re not going to bother to try to them on. (I used to feel this way about the “straight cut” from Aviatic, a hip jean company in the ‘90s, which I think was Italian, but I’m not sure.) It’s that “fit every time thing” that works for me. 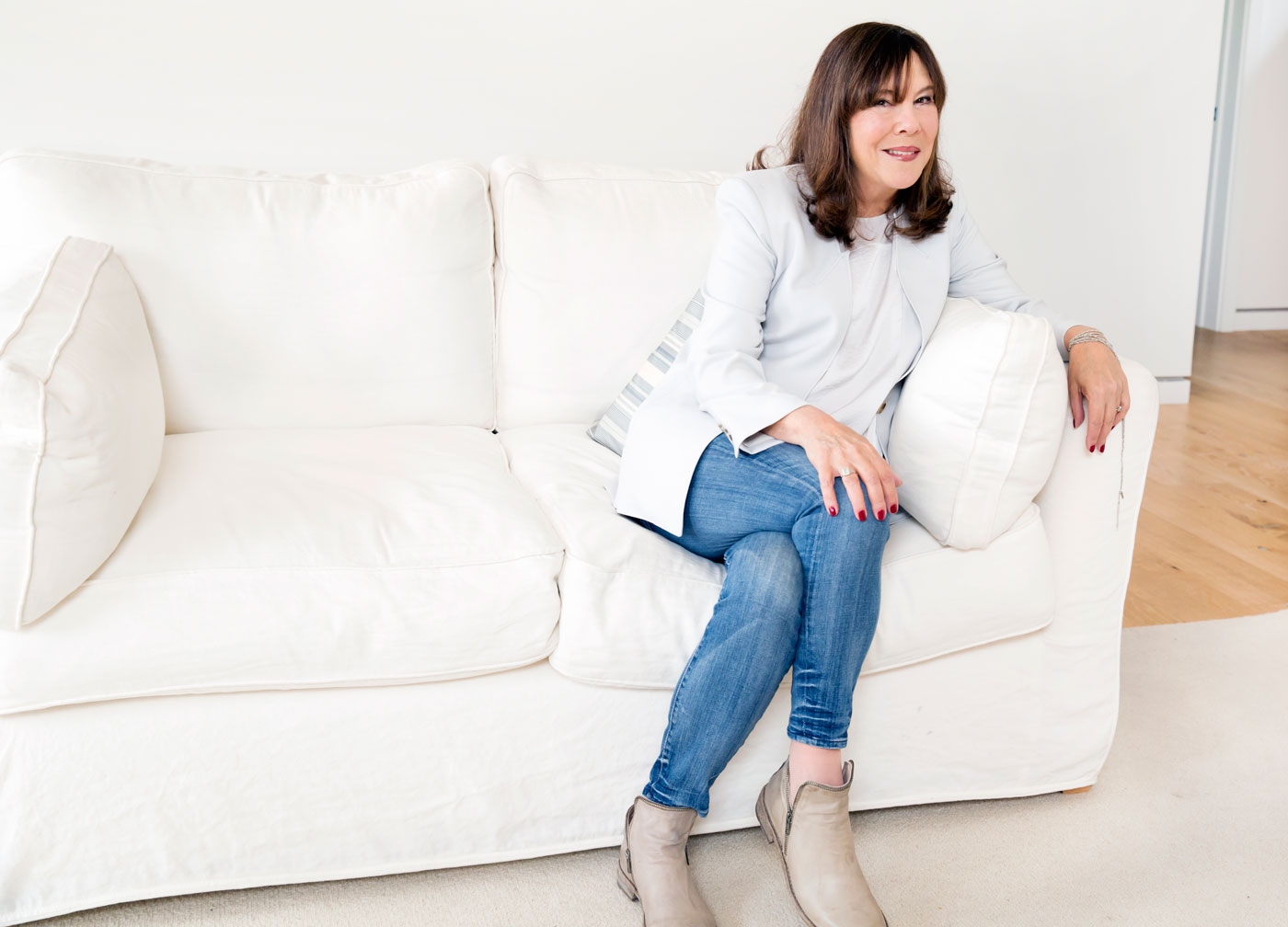 TRUE BLUE The author, in her favorite 7 For All Mankind jeans, at home in Los Angeles.

Having said that, this will be my second pants disaster in the past two months: both of them involving Sevens.

The other was a perfect pair of fall/winter corduroys, slim-cut, skinny, Navy blue corduroy, very navy blue, almost black, like the corduroy version of dark denim, fashioned in a brilliantly thin corduroy. They were absolutely perfect until they went in the washing machine too many times…and I sat down on a white couch and it turned navy blue. I am happy to report that the navy blue-ness in the couch was more like a small animal shedding hair rather than an influx of dye and a moment with a hand held dust buster instantly solved the problem. It was my couch and no one else was here but it made me a little nervous about the perfect navy blue corduroy Sevens. It was clear I could never wear them out (or in) again, not if I was planning on sitting down anyway. I was very sad about them. But not as sad as I am about these jeans.

I don’t know if I can explain how much I like these jeans. (I think their style is Gwenevere, and I don’t think the color of my jean is still on their website.) They’re moderately high-waisted i.e. not uncomfortably low rise; they’re not quite cropped, almost but not quite, they adorably hit right above the ankle; they’re skinny but not so much that you couldn’t ride a bike or do a cartwheel if you were so inclined; and they’re perfectly bleached or stonewashed or whatever it is so that you can wear them with almost anything, a t-shirt or a designer jacket or, L.A.-style, both at the same time. They’re splendid with a silk chemise-y blouse and a pair of low boots and similarly happy with sandals. They’re very eclectic and utilitarian, the best thing a jean can be. I realize I should be writing this in the past-tense. I think they only have two weeks to go. I’m resisting the impulse to wear them every day.