Few women can be like Vogue‘s Chioma Nnadi and project a perfectly clear and singular fashion sense without ever seeming to wear the same thing twice. One day she’s in vintage 501s and a red-on-red turtleneck and topcoat. The next day she’s starring in a Vogue.com Jeanius video wearing a printed prairie dress with a strict, conceptual jacket – “something usually comes to life when you put it with something unexpected,” she says, explaining the odd combo. For our shoot, Chioma paired this patch-smattered jean jacket, found on eBay, with pin-striped polyester pants. So, yes, her look really runs the gamut, but the Vogue fashion writer, who will assume the role of Digital Fashion News Director at Vogue.com next week, is always pushing the envelope and championing cool new versions of what – at its core – is essential, exceptional tomboy style.

We admire Chioma because she references Céline when talking about the carpenter’s pants she buys at the random surplus store on 6th Avenue (as she points out below, the two really do have something in common). We admire her because when she gets an itch for an item – like this very blue vintage 70s denim jacket – she goes after it, regardless of whether or not it was on a runway (which she sees plenty of). Trend-chasing isn’t Chioma’s beat. No, from DIY-ing back in her high-school days to saving up for a pair of Sevens, the fashion writer and self-proclaimed denim purist is much too original for that.

Tell us the story behind this jacket…where did it come from? Why the patches?

I’d been thinking about patches for a while – maybe since that 3.1 Phillip Lim show. But I was at the Mary Katrantzou show in London last month, and she didn’t do any prints; she did all of these insignia dresses, mostly made of patches. Later that day, I don’t know, I just ended up on eBay looking for jackets and things with patches on them.

Were there lots of them to choose from?

There were not lots of them. There were two. This one I instantly fell in love with just because it had all these ridiculous things all together –Mickey Mouse, a random Japanese one… It just had so much personality. The other was clearly a trucker’s jacket. People put patches on things either because they’re part of a gang or they’re a trucker – it’s like accumulating stripes and medals in the army. So you’re clothes become like a patchwork quilt of whatever you do or whoever you are. The trucker’s one had all of the patches from different states, which was like a map of where the owner had been. I love that idea. You add one more, and you remember when you look at it where you were or what you were doing.

So there was no deep, underground world of patchwork jackets on eBay? You’d think there would be.

There was not. And it was really better that way because I only had time for a quick, little fashion fix. So I bought it. And when I came back from the shows in Europe it was on my desk in a package from whoever sent it. And it was heaven.

And it fit you…

…perfectly. I love the idea of wearing a jacket as a shirt, with nothing underneath – just as I like wearing a blazer with nothing underneath. There’s something just really sexy about that, but still very tomboyish. I’ve got quite a boyish figure in a way – broad shoulders. This is definitely a boy’s x-large jacket and fits me just perfectly. Even the arms are right. It’s crazy.

There are hints of the person who owned it before you on the label…what does it say?

The label is a JC Penney boy’s jacket and it has Jorge Lupe, which is a kid’s name, in it. It’s hand-stitched in. Probably so that he didn’t lose it at school. I remember when I was a kid, for some reason we were required to put our name in our clothes, too. My mom and I had to sew them in. I remember getting these little labels…so the jacket brings back memories of that. 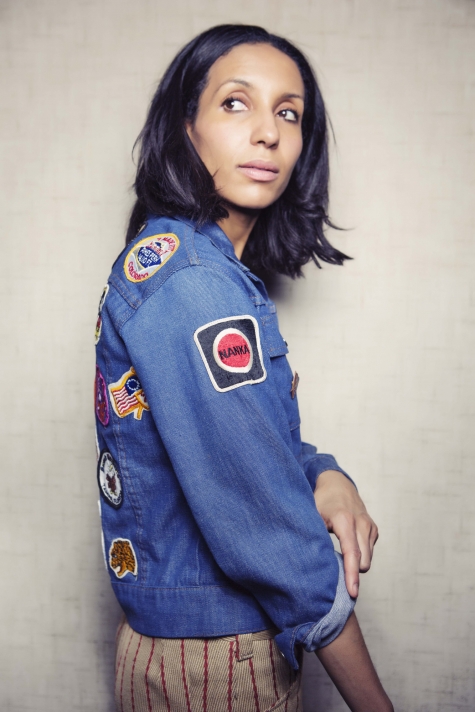 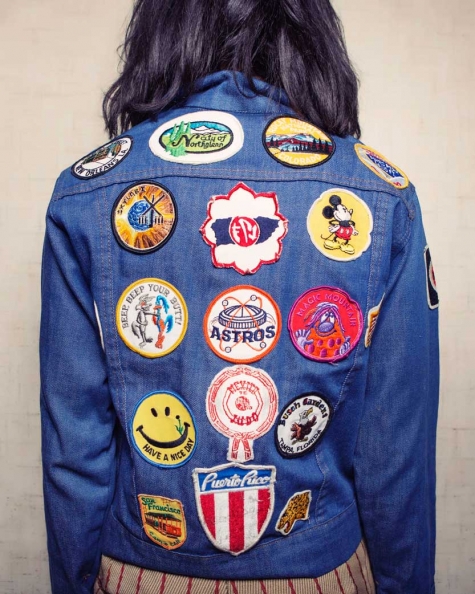 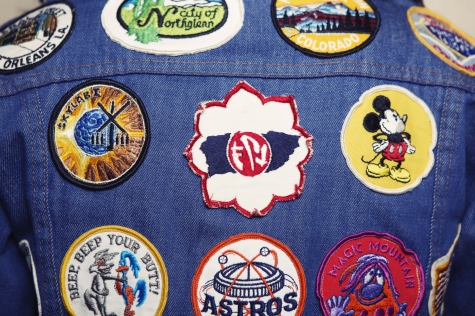 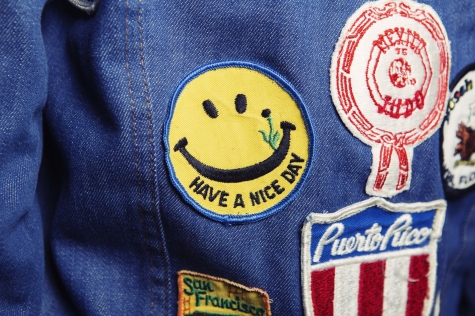 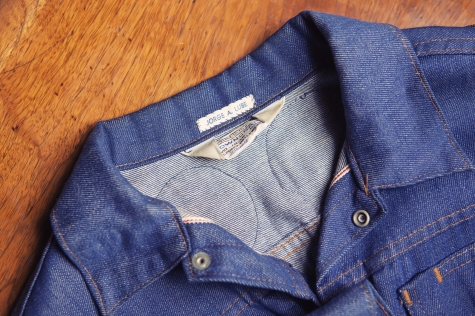 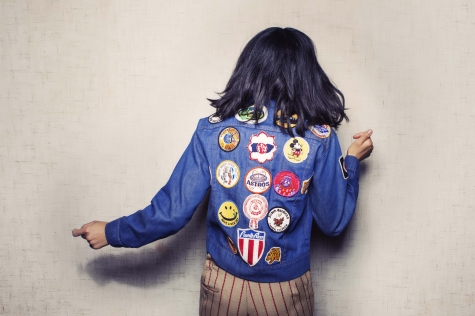 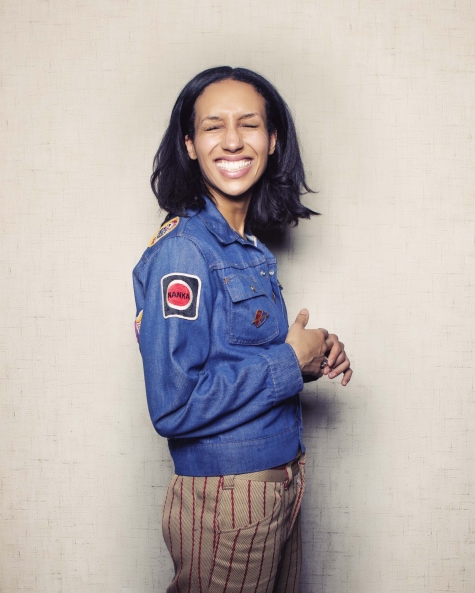 Why patches? Why not some other embellishment or decoration?

I just love them as a way of personalizing denim. A really generic denim jacket is going to have so much more personality if you decorate it with a bunch of patches that you’ve collected. I’ve tried collecting my own patches, but I couldn’t get around to actually putting them on a jacket. It’s such a teenage project. It’s something you do when you’re in your room at night and you’ve done your homework and you’ve got nothing else to do. We don’t live those lives anymore. There’s no free time for that.

Did you do that kind of stuff when you were in high school growing up?

I was very into DIY-ing my clothes. I did a lot of felt cut-out letters on sweatshirts. I remember getting an X-Girl t-shirt, which I still have, and it had something like ‘Music Beats Life’ on it, and I just remember loving that. And I remember getting a really cheap sweatshirt and buying felt letters in different colors and putting that saying on the front of it. I did stuff like that.

How do you wear this jacket now?

I think it must be a late-70s jacket; it’s got that sky-blue tone that was really popular at the time, and that I love. So I like wearing it with a 70s masculine trouser that I can wear to work. The jacket is a fun thing to wear with something a bit more serious, like a pinstripe pant. I would wear it with a slipdress. I feel like I’m going to get a lot of mileage out of this jacket.

As a fashion news editor you see so much denim, and always the latest. What excites you in denim right now?

I have been loving all of this very destroyed denim. I mean, I’m quite a purist when it comes to denim. I like my denim to have a weight to it, I like it to have structure. I get very nervous if it’s stretch. I like an old-school denim that feels like I have to give it love before it gives into me. I’ve always been that person. And I’ve never been committed enough to actually wear it from raw, so I’ve been cheating with vintage. I feel like I’ve been borrowing other people’s stance. A pair of jean affects the way you walk. The way to stand. Your attitude. More than any other item of clothing, I think. When you find a pair of vintage or used jeans that fits right you’re like, I feel good, I feel right, I feel like I’m channeling whatever cool person wore these before me.

I also love it when girls cut off the ends of their jeans. I’m really obsessed with that right now. I noticed last year in London all of the girls did that, and now I’m seeing it here. When I was growing up in the 90s and early aughts you bought a pair of jeans and then they destroyed themselves because they were always too long – you wanted them to cover your shoes – and so they were always dragging on the floor. I like this new version of that that’s cropped, it’s higher. So it doesn’t get wrecked.

What else do you remember about the jeans you wore when you were growing up?

Well, I grew up in London and I remember buying my first pair of Levi’s. I must have been 14. I’d never been to America, but all of my friends would come back with their Levi’s. They still weren’t everywhere, for Brits, or for me. Getting my first pair of Levi’s was a big deal. I bought them at like a denim supply store. Back then you bought your jeans at a store that was full of denim and random sneakers…

They still exist those stores…

They were pretty hard these jeans. They were normcore, whatever they call normcore now. The Jerry Seinfeld-look phenomenon – like Walmart jeans and New Balance sneakers. It’s the Steve Jobs look. Those jeans were like that. Like backlash to street style.

Would you say those jeans were important to you, though?

It’s funny because I grew up in a house where my Dad refused to wear denim because he considered it a sign of American Imperialism. He never wore jeans. Nobody really wore jeans. I went through a phase where I pretty much only wore denim and a sweatshirt, they were probably Gap jeans. When I got my first job that was when I got my first pair of fancy jeans. Those were important to me.

I was working at The Evening Standard and I came on vacation to the States, and it was very important that I go home with Seven [For All Mankind] or Earl jeans. I remember, everyone in the office was obsessed with those two brands. You could get them, but they were really expensive. When I bought them it was like I had entered into this secret world – that was in the early naughts. Earl jeans were really low and that’s tough for me. So I bought Seven. And I kept those Sevens for years. And, you know, I wore them with pumps…that was a look. That was a look for so long! It was a bootcut and a pump and hoodie and blazer. The hoodie was always a pop color, like a pink hoodie and a navy blazer, and then like pink pumps. I was all into matching. And I remember watching ‘Sex & The City’ and I had those star earrings that Carrie wore in one episode. At this point I was in New York. This was when I was figuring out my style in New York.

But I love workwear, and denim is ultimately workwear. I recently went to buy carpenter jeans at Dave’s on 6th Avenue and 16th Street and the men in the store were so confused. It’s strictly Carhart, menswear, it’s like a supermarket-style store. You go in if you need something very functional. But recently I went in and bought a pair of men’s white carpenter-style denim work pants. They hold you in. They’re really stiff, but they’re really flattering. You know when Phoebe Philo did those pants for Céline that had, like, the large pocket, like, patch-pocket fronts? That little detail is really figure flattering. It really helps. It really distracts the eye. And these pants have pockets like Phoebe’s trousers – with a very wide leg. Dries [van Noten] did a pant with a pocket like this, too, once. At a designer level they’re generally hard to find. But if you go to the workwear store you’ll find tons.

Note: The patches in the Get The Look are all available as of this story’s post date. For more, go to Your Patch Store on eBay.com.