The best part about about working with the stylist Kate Young was that there was so very little styling – in the obvious, premeditated sense of the word – during our shoot at her home in Brooklyn a few weeks ago. We arrived early, just as she was just returning from the bakery around the corner from  her apartment. She had a cup of coffee in one hand and one half of a pain au chocolat in the other (the other half already devoured). Leading us through a heavy side door and into her kitchen, she explained that her kids – she has two young boys – were at school, and that she and her husband, a musician, had been up late drinking lots of wine and talking about a project he was about to launch. Was she regretting last night’s indulgence this morning? No. But the croissant was a must.

Inside, Kate showed us around – through the kitchen to the grand living room with its fireplace and big bay window; downstairs to where the two bedrooms are – to her closet. Was it big? Yes. Organized? Essentially. Full of beautiful pieces and blasts from fashion’s past? You bet. But none of it was arranged like it was ready for a style-blog-close-up. Her clothes weren’t color coordinated or hanging on uniform, felted hangers, but she knew exactly where they were. Her shoe rack was from Ikea, and it worked.

Kate’s bed was white and undone. So was her hair, actually. Her face was makeup-less, yet and flawless and bright. And when our photographer Kava requested that she crawl into bed, Kate threw on a gray thermal t-shirt, her favorite old Paper, Denim & Cloth boyfriend jeans and did just that. We had talked about outfits, and “looks,” but when it came time to take her picture, instinct trumped trying-too-hard.

Bodysuits are Kate’s secret weapon. She wears them under everything, which makes changing in front of strangers (ie. us) a lot less awkward. This – not the application of accessories, or the mixing of prints, or the layering of outerwear (none of which happened during our shoot) – is evidence of Kate’s pro-styling skill. Her ability to identify the moment – a quiet, fall Wednesday morning in Brooklyn – and dress for it honestly in premium jeans and t-shirts made such good sense! The lesson learned: Easy does it.

It was hard for you to pick just one pair of jeans to wear for our shoot, so you wore three… and a jacket. Tell us about all of it.

The Paper, Denim & Cloth boyfriend jeans I got maybe 10 years ago, when Paper, Denim first launched back in the early 2000’s. I know that you can get a jean similar to this one today, too, now that the line has relaunched. I love the fit – that it’s a boyfriend without being too exaggerated or oversized. It’s flattering and comfortable and works on my body. Usually, I wear them rolled up with heels: black suede Proenza Schouler pumps; lace-ups from Balenciaga, with the cube-shaped heel; or a flat, Dieppa Restrepo slip-ons or Ancient Greek Sandals. On top I like either a crew-neck sweater or Equipment silk button-down shirt. I almost never wear belts. I buy them, but I never wear them.

The Lee jacket I bought at the thrift store that was across the street from my high school in suburban Pennsylvania. I was 15. It’s a kids jacket, but I’ve always liked how cropped it is and how small the arm hole is. It’s a good blue and it’s slim, so it fits under coats. When it’s cold, I wear it under a motorcycle jacket or a trench coat. When it’s warmer, I wear it as a shirt. It’s kind of seen it all – I wore it in high school, college, in the picture that was on my Eurail Pass when I travelled in my 20s. I’m wearing it my passport picture. I can’t believe I never lost it…through many moves and break-ups.

The Goldsign “Jeane” jeans were a gift – I love them because they’re really soft, like sweatpants or a t-shirt – and they have a dropped crotch. And they’re too big for me, which I love. I wear these on weekends or when I’m running the kids to school with a t-shirt and Birkenstocks in summer. Or with a big fisherman’s sweater and Converse sneakers in the fall.

My A.P.C.s I got in New York City when I was in college. They were a big deal. I was told to never, ever wash them, and to only use this special wax to clean them. I wore them all the time – especially on Fridays. I was an assistant at Vogue, and Fridays were the only days I was allowed to wear jeans. Then I didn’t wear them for years because I preferred lower-waisted skinnier jeans. But now they look sort of retro. The waist is high and they’re a little cropped, and I like that the whiskers are real, that I wore them in. They’re not an effect. I’ve been wearing them lately with a cable-knit crew-neck from Ralph Lauren and some old Gucci loafers. But I like how they look with just a white t-shirt best. 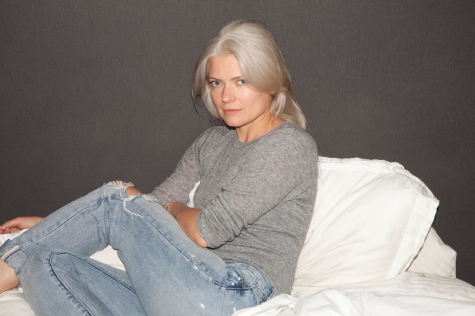 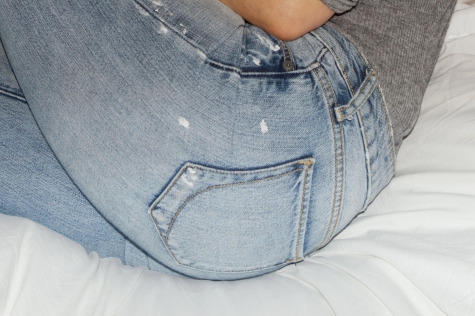 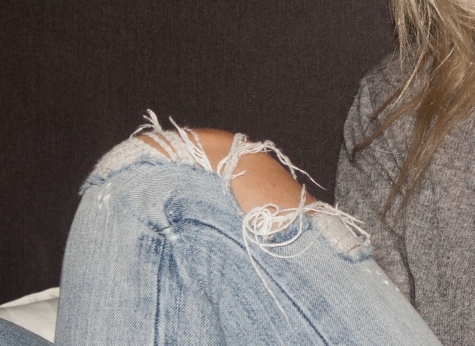 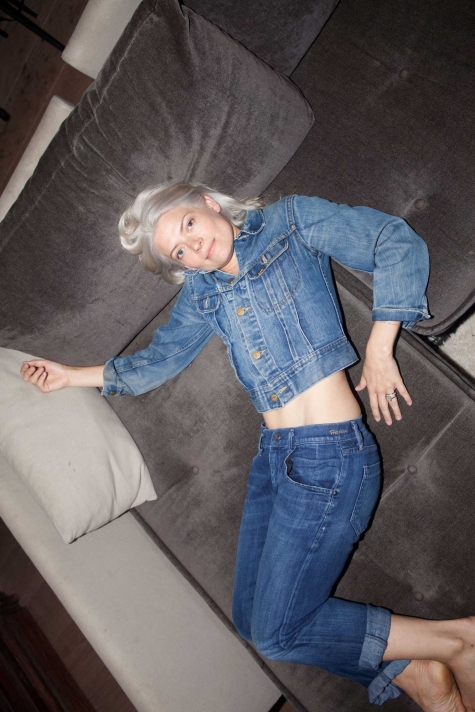 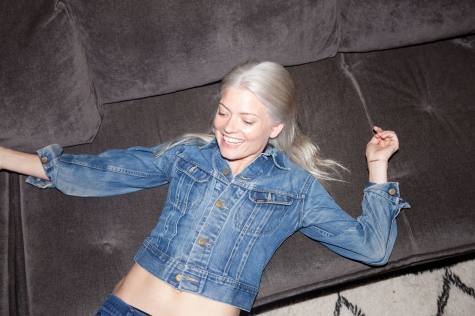 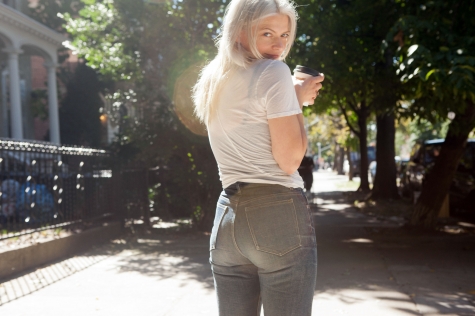 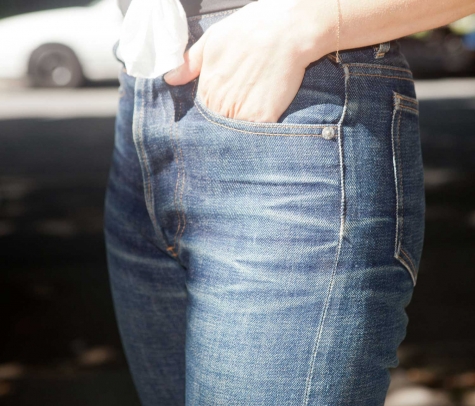 You’re also wearing a bodysuit under everything (readers, can you tell?). Why?

First of all, my husband thinks they’re sexy in a 1980s, Tawny Kitaen-y kind of way. But I like the way a bodysuit keeps clothes from clinging to my body. If I’m going to be trying a lot of clothes on – which I knew I’d be doing for this shoot – it’s modest and practical. I love the American Apparel ones, and I have a great one from La Perla that has transparent cut-outs. The ones from Spanx hold you in and don’t leave any lines. I also like that you can move in bodysuit without ever showing your skin. My job is really physical – on set and in fittings I have to tie models’ shoes and roll-up their pants, and I’d rather people didn’t see my butt while I’m doing that.

What color are your bodysuits?

Do you have any dressing issues or challenges that the bodysuits don’t solve?

I have a short torso, so even though I love high-waisted jeans, a lot of them come up too high on me. I don’t like jeans that are too stretchy and legging-ish, either. I think it’s getting harder to find jeans with the right amount of stretch. Most of them give too much. But I think a certain rigidness is what makes denim flattering a lot of the time.

Both. Last year I only wore BLK DNM or Rag & Bone skinnies to work. This year I’ve been wearing black Proenza Schouler jeans, which are cropped and have a little flare at the ankle. That silhouette is my favorite right now.

For work? Black. But on weekends, I like blue. Though I have been wearing the Paper, Denim & Cloth jeans to work a lot lately, and they’re pale blue.

Do you have any denim don’ts?

No. But I know some people don’t believe in washing their jeans. They swear it’s not gross, but I don’t believe them. I wash my jeans a lot. I like my clothes clean and fresh, and I don’t think dry cleaning really does it. Plus, washing them tightens them when they’ve been stretched out, and I like them tight.

Describe your jeans in one word.