We at Jean Stories love a field trip. (Haven’t met a denim mill or wash house we didn’t love). So we were excited to set out from the city on a recent Monday morning for a drive out to the Hamptons – Springs to be precise – to see Jeff Ricker, indigo dyer and proprietor of Ricker Handmade. We’d spotted his reconstructed sea bags, alpaca blankets, and ponchos in Lisa Fox’s Manhattan store LF8 a while back, and we wanted to see where all the dip-dying magic happens.

Jeff, a South Carolina native who’s lived in L.A. and NYC, stays on the beautiful, grassy property of well-known landscape architect Edwina Von Gal. Wearing his favorite RRLs, he gave us a tour and led us under Edwina’s home – it’s on stilts – through a marsh and to the waters of Accabonac Harbor. It’s the kind of idyllic setting where you have to shoo the deer away to get back to his studio, a wooden structure that houses his carefully balanced vats of indigo dye and all the projects he’s working on – which could be anything from his signature bags, to sarongs for Donna Karan’s Urban Zen store in Sag Harbor, to special orders, like a friend’s Reed Krakoff handbag (he’s been entrusted with dying Birkins; more on that below).

Almost as much as we love a field trip, we love anything having to do with indigo (it’s all in the denim family). And we jumped at the chance to see Jeff’s dying process. A self-taught indigo man (and trained yoga teacher) – “I’m a total Aries that way,” he admitted – Jeff showed us how to transform a plain, white shirt from pretty boring to deep blue. It’s nothing we haven’t seen before, but it was, we thought, pretty magical.

So, you became interested in indigo dying while you were working in men’s design at Ralph Lauren. Tell us about that.

Like lots of design houses, they work from concept. And they had a big concept wall. I was seeing lots of amazing vintage Japanese pieces that they would bring in because it was so specific of a color. There was always something I was really drawn to about indigo. Just through osmosis. When you’re around it, you want to learn about it. When I started making bags, I thought, I really want to indigo dye this. I wonder if I could do it. I just jumped in with both feet. I made a very small vat and dyed a bag. I dyed some linen, I handmade some linen sarongs for Donna Karan. She’s been really incredibly sweet. And then I dyed a lot of cashmere.

How did you meet Donna?

Through mutual friends. I’d met her at the store in Sag Harbor. I just got to talking to her, because I have a yoga background. I’m a trained yoga teacher. And that’s part of Urban Zen. I got to know her better.

How long have you been a yoga instructor?

I did that in L.A., because when you move to L.A. that’s one of the requirements – to become a yoga teacher [laughs]. I trained at Center for Yoga on Larchmont. It was right before Yoga Works bought them, so it was the last groovy, eclectic training program.

Where did you teach?

This is where it’s going to get all crystals and rainbows. I have this thing, and it doesn’t happen with everybody. But lots of times, I can be with someone and lay hands on them and feel in their body what’s going on. It wasn’t like I learned it, it was like I remembered it. I can see what people’s obstacles are emotionally, what they’re holding in their bodies. I’ve really taught privates more than anything else. I can see what people need and go deeper with them.

We’d ask you to go deeper into that, but maybe we should stick to the subject at hand. How do you make your reconstructed bags before you dye them?

I have different ways of finding vintage military bags, tall cylinder-shaped ones they call sea bags. I’ll take those and clean them, and then chop out the big mid-section, and sew those two pieces together to make a reasonable-sized bag. I find them on e-Bay, tag sales… I’ll find them all over. The ones I like are a little more scarce, the cream and white ones. They’re getting a little harder to find. I’ll probably move on eventually to a nice heavy canvas and make them myself.

All the bags are different. Each one’s kind of a one-off. It’s pretty labor intensive. If I work pretty solidly, it can take me two days to make a bag. That’s not including the indigo dying part. They start around $600-$650. They can go up to $850 or $900. But I wanted to make them myself. I didn’t want to design things and have them made overseas somewhere [Jeff’s production is so small that almost all of his inventory was out the day we visited].

Do only work alone or do you have anyone help you?

No, I’m too much of a control freak. It would take to long to show someone else how to do it. The hard part is balancing the vat.

So, how did you learn how to do it? Google it? Read about it?

And you’ll dye anything?

Almost anything. I take special orders, so send me something you’re tired of and I’ll dye it. Natural fibers and materials take indigo dye the best.

Leather, too. Your friends give you their very expensive handbags to dye. How did that start?

The first one was a Birkin. I tried to tell her, This is going to change it. But she’s an indigo fanatic like I am, so she was just all about it. She told me she was in Hermès the other day and they flipped out. They loved it. 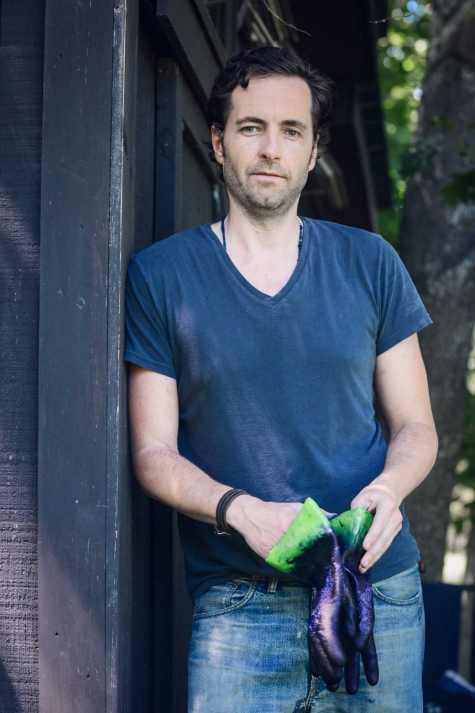 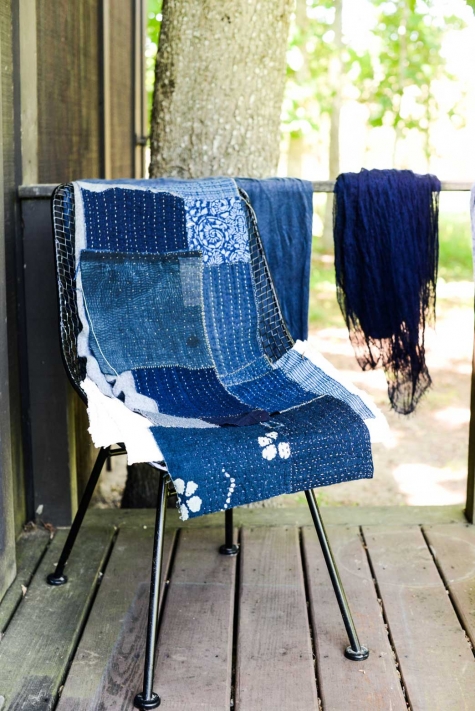 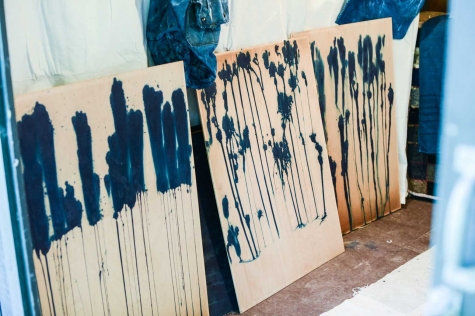 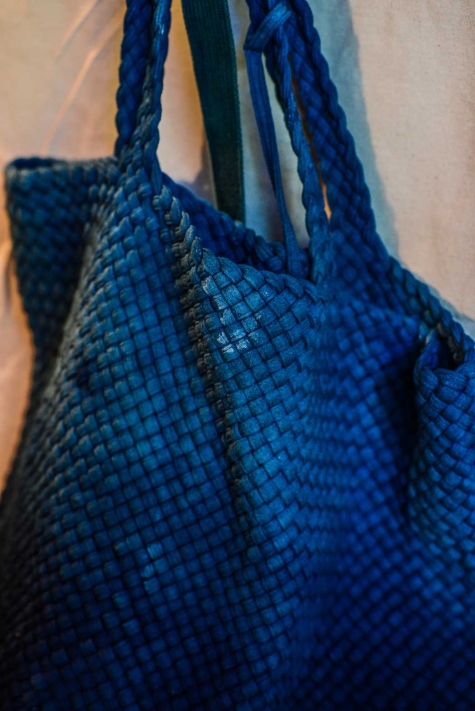 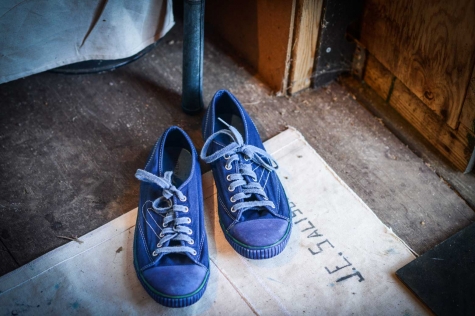 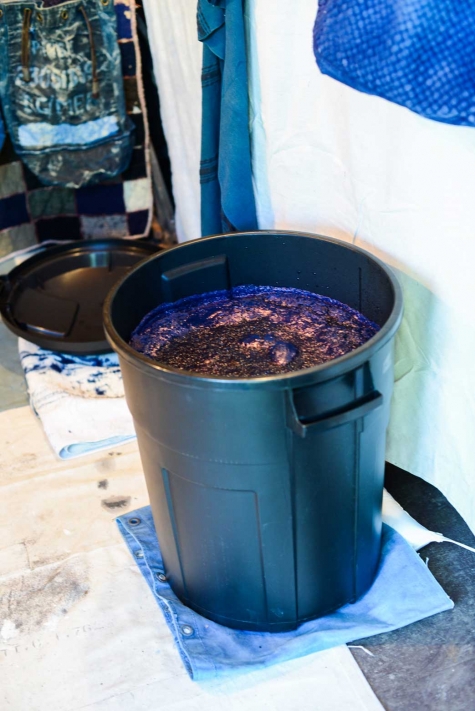 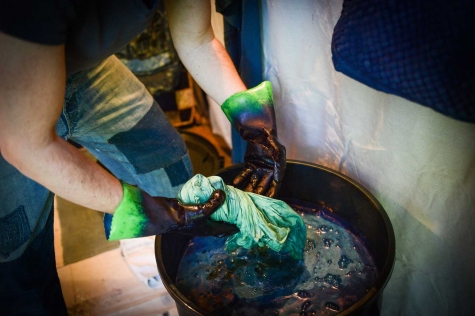 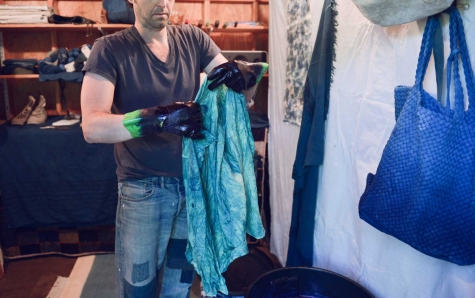 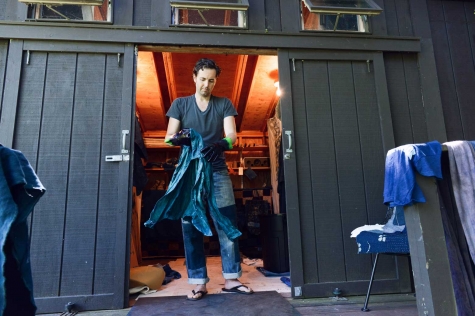 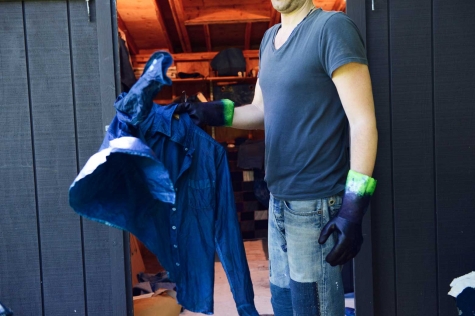 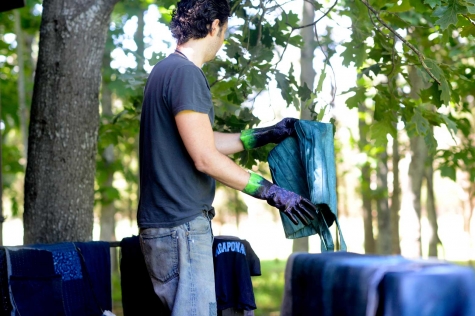 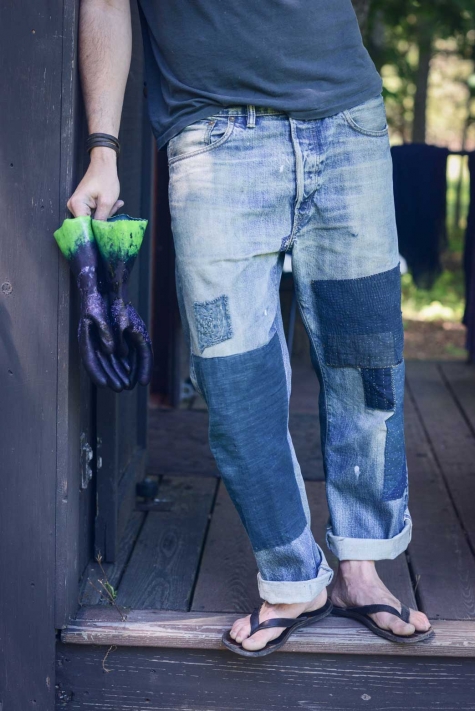 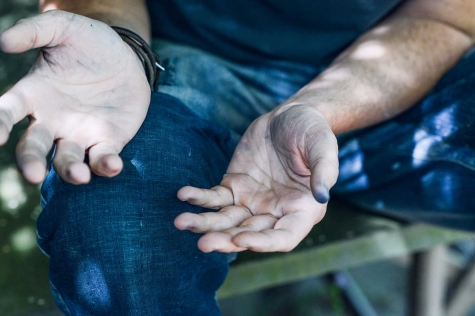 Okay, time for some of our signature Jean Stories questions… Besides these jeans you’re wearing, what are your favorites?

I used to wear A.P.C.s a lot. I get those raw and just wear them and wear them and wear them. I have to say, I’m pretty RRL. I think my next pair of jeans are going to be those 21-ounce, stand-on-their-own jeans. I love that super-heavy denim. Maybe from Self Edge in the city. I never go skinny at all. I like more of a wide leg.

What’s the first pair of jeans you remember having as a kid?

I remember having Levi’s as a kid. My mom would buy us Levi’s. But the first pair I remember loving was this…was it Union Bay? I think I had them in high school. The other pair that changed my jean life was when Levi’s did this limited-edition jean called the Nevada – exact replicas of a pair they’d found in a silver mine in Nevada. This was in, like, 2001. I think at the time they were $500, which was a lot for a pair of jeans for me at that point in time. I loved those jeans. I sold them on eBay for $1,300.

What was the last pair of jeans you bought?

A pair of RRL raw straight-legs.

If they could say something about you, what would they say?

Hobo. I don’t mean that in an ugly way. I think you need some element of hobo…off, old, worn. Rode hard and put away wet kind of thing.

Nooooooo. I know these are not going to last a whole lot longer, so I don’t want somebody else…They’re not going to be careful with them. If anything were to happen, I’d have to hate them [laughs]. I’d rather not go down that road.

Who else do you think has good denim style?

Really myself. These are really me.

A whole part of your personality gets truncated. There are some things that only wearing your jeans are going to do. Chinos, nothing else really does it. Without your jeans your just a little more generic.

Jeans, indigo – they aren’t the same thing, so what connects what you do to the denim you love?

For me, indigo is inextricably linked to jeans. They’re obviously not the same thing, but to me one of the things I love most about denim is how it ages in only that way that indigo does. So you get this range of colors and hues and wear marks that can only come from indigo dye. I think if you’re talking about denim then at some point you have to talk about indigo. It’s a very strong part of the DNA of denim. 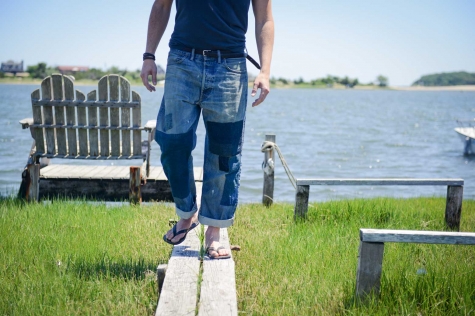 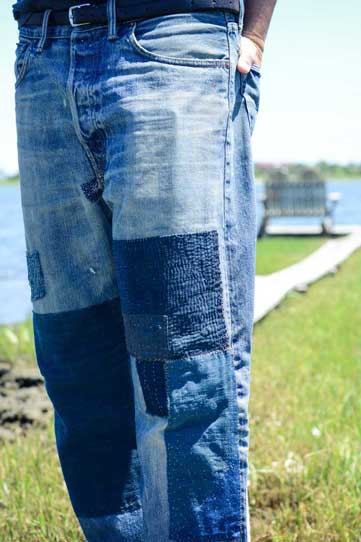 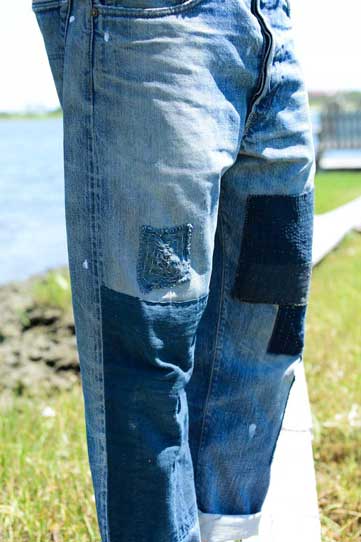 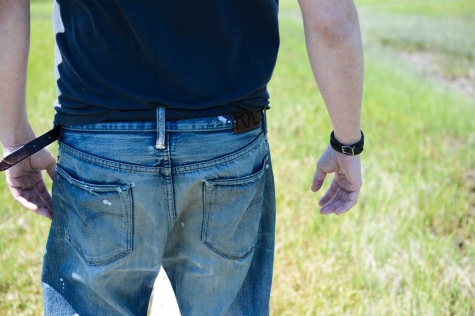 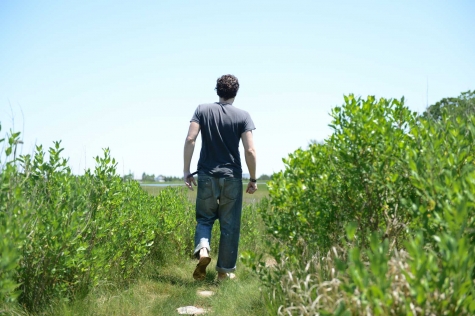