Alexis Krauss, the singer of the two-man Brooklyn band Sleigh Bells, once had a pair of glitter-covered bell bottoms. That is all. No, but seriously, imagine how hard we swooned when two hours into our visit with Alexis she told us that in high school she wore super-sparkle jeans on stage playing bass in an all-girl band called Ruby Blue. By that point we’d already fallen hard for her dog (an English bull terrier named Rizla, like the rolling papers), her makeup (a perfect application of matte and shine), and her genuine, beautifying friendliness. But then to tell us that she had jeans that would leave a puddle of glitter on the ground every time she took them off? If we weren’t already smitten with Alexis, whose music has been theme song to more than a few scenes in our lives over the years, we certainly were then. She didn’t wear the glitter jeans for her shoot with us. But it’s okay; We found that what she did wear, Courtshop‘s Audrey style, fit her perfectly – physically and otherwise. Especially after we’d heard her whole denim history. Alexis tells all – from the JNCOs she’d journey from New Jersey to NYC to score at Urban Outfitters, to the “bunch” right where hemline meets heels that she’s currently learning to love – right here.

You’re the first person to wear Courtshop jeans on our site. Tell us how you discovered them!

Well, one of the most exciting things about being in a band has been getting to meet people in the fashion world. I’ve never been a big designer person. I’ve never been a big label person. For me, clothing is personal – a reflection of who you are. I’ve never seen it as something that’s about status or privilege. I want to feel comfortable in my clothes, and I want to feel beautiful and confident. I like the idea of working with designers who do it because they love it. So when I was put in touch with Lisa [Fuller] from Courtshop I could see that. She has this small company that’s New York-based, and she’s just this badass chick who is just in love with making jeans. The fact that I could sit down with Lisa and talk to her about her label…that she’s been to our shows…that relationship is so exciting for me. And the jeans she makes are great! They’re generally pretty high waisted, which I find is more flattering on me. These that I’m wearing are called the Audrey. What I love about Courtshop jeans is that they are always sort of basic and classic, but then Lisa adds these little details like the leather pockets and the buttons. I love leather and I love denim-and-leather mixes, and that can be hard to do in a way that’s classy.

Do you usually wear black jeans?

I do wear a lot of black jeans. I tend to always wear black jeans. I wear a lot of blue jean shorts and washed-out denim shorts, but I feel like if i’m wearing a long leg it’s just more flattering to have a dark silhouette. I don’t even think that I have a pair of non-black jeans. And most of them are skinny. But I’ve been looking for a really great looser, boy-cut jean. I have yet to find them. It’s hard. If you go to vintage stores, there’s always something that’s not right. 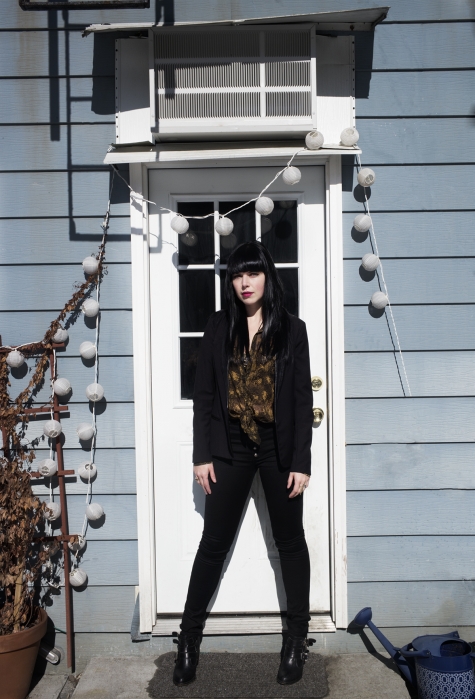 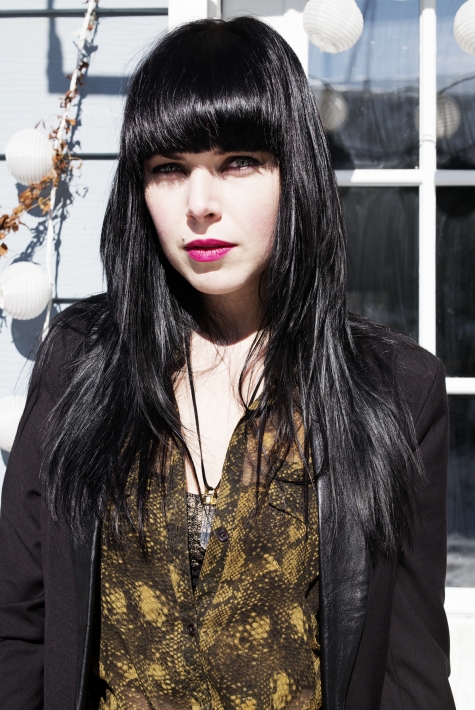 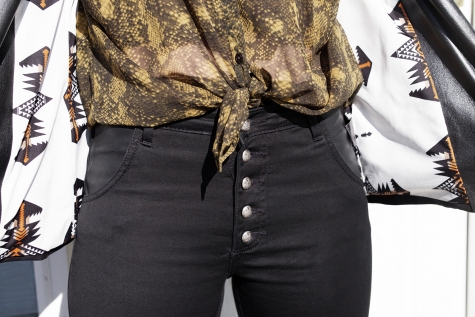 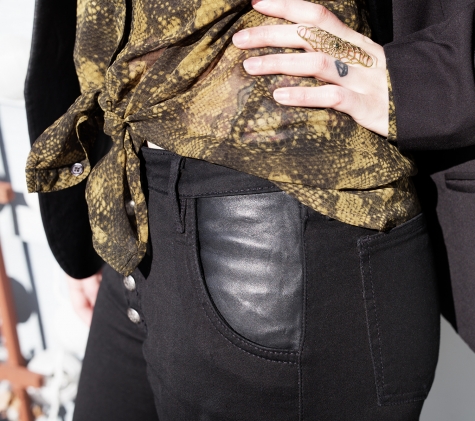 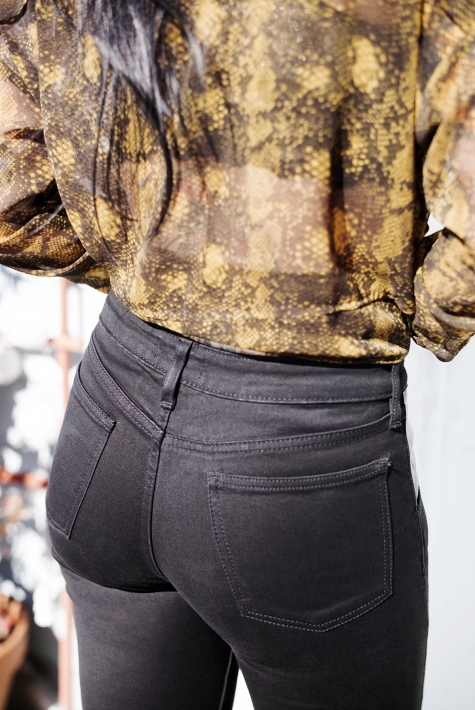 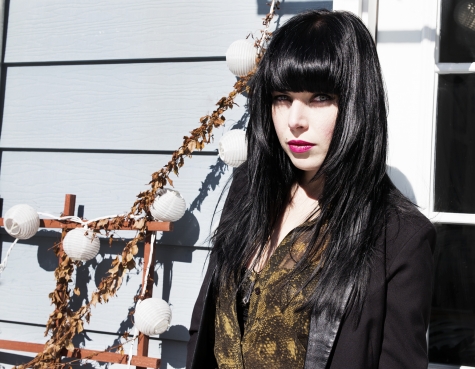 Tell us about the shoes you’re wearing? How do the jean and the shoe work together?

My shoes are TBA (To Be Announced). I think the length of your jean is all dependent on the shoe, right? Usually, I like the leg to fall clean and flat, but lately I’ve been liking a little bunch at the ankle – I call it a “bunch.” Like, it bunches up. And when I wear these jeans with this shoe, the shoe has a little bit of an opening at the top. I can tuck the jean nicely in there.

Do you ever wear jeans when you’re performing?

I do sometimes. But I tend to perform wearing cut-off shorts with little lace shorts underneath and then fishnets, which has kind of become a staple for me on stage. I’m very physical when I’m on stage, and jeans…I would just destroy them. I don’t like to feel like I’m hindered in any way.

So when do you wear jeans?

Pretty much any other time except when I’m on stage [laughs]. I have a couple of dresses and skirts that I wear sometimes, but, otherwise, I wear jeans.

Has it always been that way? Did you wear a lot of jeans growing up?

I did. I wore jeans constantly. I was a real tomboy, I still am. I still consider myself pretty tough [laughs]. So I wore Converse Chucks and jeans. I had lots of overalls. And yeah, I liked jeans that had rips in them. I wish I still had some of them now.

When was this, what year?

I was born in ’85, so that was in, like, the mid-90s. And when I was in high school I feel like all I wore were jeans. I went through an awkward phase wearing bell bottoms, which were really popular. I remember being at the mall with my mom – the bigger the bell the better. Then, when I started getting into punk, my friends and I would wear skin-tight jeans with creepers and studded belts. The jeans were always super, super low cut. It was constantly a thing – my parents were always, like, Pull up your pants! You know because when you’d sit down you’re underwear or your thong would be hanging out.

Oh, we know. But wait, this was before skinny jeans made a comeback in fashion…

I feel like within the punk and hardcore music scene the aesthetic was always about a really tight-fitting pant or legging because you’d want it tight around the ankle so you could wear it with your creeper or bigger boot. I always liked tight pants but I hated low-cut pants. So when they started making high-waisted skinny jeans, it was a dream come true. Heaven. 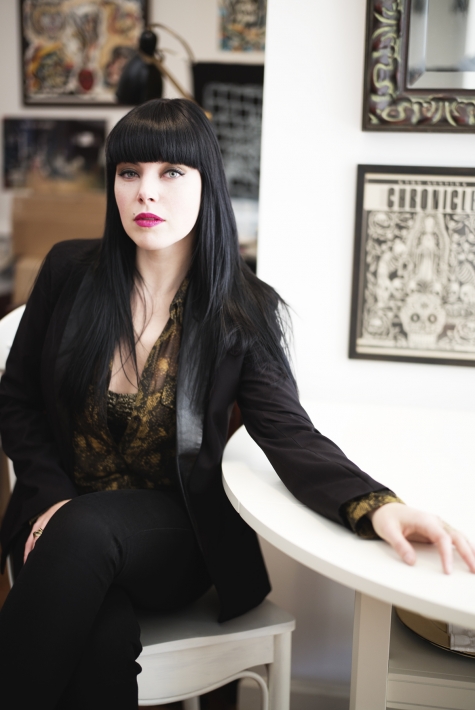 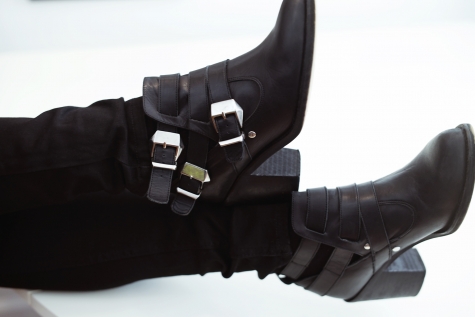 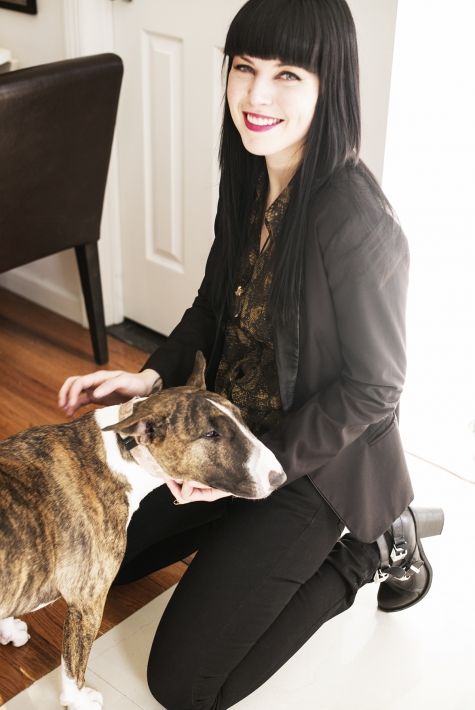 Where were you buying your jeans back then?

Urban Outfitters. It was a big thing for me. I used to go to the one in the West Village on Sixth Avenue. I used to go there and just be like, Oh my god [whispers, wide-eyed]. I remember, too, I went through another phase – maybe it was after the bell bottom phase – where I did the wide-leg-pant thing. So wide that it covered my shoe, with the creeper underneath. You had to find the perfect length of pant to cover your shoe without it dragging on the ground…so that they didn’t shred…so that you weren’t stepping on yourself constantly, but so it looked like you had no shoe one. They were called JNCO jeans. They were huge. I remember getting them at Urban Outfitters when I was in the eighth grade. After buying those, my mom took me to the John Fluevog store, and I got these really hardcore thick rubber sole Dr. Martin-y-looking Mary Janes and I thought I were the coolest. They had a really thick buckle. I would wear those all of the time. With the exception of my friend Kate – who was a really big style inspiration for me and wore creepers and used Manic Panic and dyed her hair red – everyone at my school was very preppy. A lot of Ugg boots and flip flops and surfer style.

But not you and Kate?

No, we wore studded belts, or the ones with the grommets, and those super spaghetti strap tank tops and our hair in Gwen Stefani knots. I always wonder about the girls who are obsessed with Miley Cyrus – do they know that the knots with the butterfly clips…that Bjork and Gwen Stefani were doing that so long ago?

Is that what you were listening to back then? Gwen Stefani and Bjork?

I listened to a lot of Blondie, the Ramones, The Clash, The Smiths. Like everybody, I went through my Morrissey stage. And then, like everybody, I started getting more and more into indie rock – Rilo Kiley and The Weakerthans. I was a Weezer fan. In the town where I grew up on the Jersey Short it was a super surfer-y kind of vibe. Everyone listened to Phish and went to Allman Brothers concerts. Tyler [my fiancé] and I have been together since we were, like, 15 – we’ve been on and off – but we’ve been like best friends since then. And he was a huge influence on me musically because he played in punk bands and was really involved in the hardcore scene. He’s a singer and a lyricist; he’s always been a frontman. So I was with him, and was obsessed with hardcore music when all my friends were listening to Dave Matthews. Not that I have anything against Dave Matthews. But I was lucky because I could come to the city for shows to see music that no one there was really listening to.

Not to be a buzz kill, but what did your parents think of all of that?

My parents were very supportive. Jimmy Destry, who was the keyboard player in Blondie for many years, was my mom’s first serious boyfriend. My dad was always a musician. My parents were a hell of a lot cooler than I ever was. And they listened to great music – Bowie, T-Rex…

So they were supportive?

Yeah, you expect parents to be, like, No, don’t quit your teaching job to be in a band. You have benefits and healthcare, you’re getting your masters… But my parents, I think they always felt that I was really good at music, and that I loved being on stage, and that that was what I should be doing. Though, I think my mom is really glad that I’m no longer wearing glittery bell bottoms.

What? Please tell us more…

I had a pair of straight-up glitter bell bottoms [laughs]. I used to wear them on stage when I was performing in an all-girl band called Ruby Blue. I was the bass player. I remember we were at a club called the Crocodile Rock, in Allentown, PA. We played there with this band called Dream Street which was a prepubescent version of the Backstreet Boys. There were four girls in the band – myself, a guitar player, a keyboard player, and a drummer. I had a maroon corset that I would wear, and then these jeans that were bell bottoms covered in glitter. Whenever I would take them off there would just be glitter everywhere. I remember getting into a fight with my mom about them. She thought they were horrendous.

But she let you wear them!

She did. And my mom has a great sense of style: basic – black jeans, simple top, t-shirts, boots, jacket, and you’re done. She always has a great leather jacket or denim jacket. She’s just always had a classic New York look. And I think she’s glad that I’m no longer shopping at Joyce Leslie or 579 [laughs].

Would you say that the glitter jeans were your biggest denim offense?

I don’t know. I don’t have a ton of clothes. I’m not obsessive about jeans. If I have a good pair that works for me and looks good then I stick with it. Though I have made the mistake of finding a great pair of jeans and not buying more of them.