Few women have mastered the art of uniform-dressing like Vogue‘s Fashion Director Tonne Goodman. Her look – straight-leg jeans in white or black with a turtleneck sweater or button-down shirt and flats – is not just consistent, it’s constant. Chic and immaculate, it never gets old! And, given how easy and efficient it seems to make her life, it now has us thinking about clearing our closets and committing to cropped cigarette jeans (of which there are many right now) for forever, too.

Visiting Tonne’s office at Vogue to do this interview, we listened in, rapt, to all the clear and logical reasons why she wears white jeans: Because it allows her to go from set, to studio, to office, to out at night without having to worry about a wardrobe change; because they go as well with wool as they do velvet; because white denim – her pants and, incidentally, couch slipcovers, both –  can be revived in the washing machine with just a little bit of bleach. So dedicated to her white-jean signature is Tonne, that she replenishes her closet with brand new pairs every couple of months. “So they are as fresh as fresh can be,” she told us.

No offense to the denimheads who prefer to give their jeans a rugged, well-worn patina (we get it), but sparkling is how we’ll take our whites, too, thank you.

Jeans work for me for a lot of reasons: facility, comfort, attitude. Facility being that I do operate from a uniform – because it is simple, and it is direct, and it is the easiest thing to do. I am a kid of the 60s, and jeans were what we all wore back then. There’s nothing that you can say that is a criticism of jeans, as far as I’m concerned. The fit is particular and perfect, and has been adopted and adapted into so many different styles; it’s now a fashion item. I used to live in button-fly 501s, period. The end. But now there’s so much more, now there’s a huge choice. Back in the 60s, it was Levi’s and Lee. Fiorucci came later, and then there was Calvin Klein. But I actually did not wear any of those. I just wore Levi’s 501s. You know, I was a hippie. My hair was down to my waist and I wore my jeans with a turtleneck sweater – essentially the same way I do now.

But you’ve since made the switch from 501s to…

Today I wear J Brand jeans with a straight leg. White. Just because of the fit; it’s the easiest, easiest for me. Once I find something that fits, I really stick with it because I actually don’t have the time to find other things. I mean, there really is a time element to the way my life organizes itself. I did wear Club Monaco and I did wear J. Crew for a while. I guess it went from Levi’s into smaller brands that were just becoming available.

So denim for you is purely a black and white matter?

I wear a black jean, yes, which I’m wearing now. It’s a J Brand black jean. I do wear a blue jean on occasion, but rarely, and if I did it would be a dark blue, with no wash, no distressing. I just think distressed jeans are too young for me. You know, a white jean isn’t a blue jean. It has a whole different look to it. You can put it with anything and it adapts to it. You can put it with a black velvet shirt and it becomes one thing, you can put it with a t-shirt and it will be another thing. So it’s a very good basic piece. It can go from a shoot, to being at a show, to being in your office – at least that’s true for me and the way that I wear them. Because it’s always a very classic approach, and very unadorned for me.

What do you have to say to people who think white jeans are high-maintenance?

They’re not. I wash my jeans myself. I don’t dry clean them. And the thing about a white jeans is that you pop a little bleach in there and it’s done. It’s so easy. In fact, all of the couches in my house are slipcovered in white denim. With kids, I thought, I want white, and what’s the easiest thing to do? I thought, Well, I bleach my jeans, so let’s bleach the couches. Then I just put them in the dryer.

Tell us about the shape you prefer…

It has a medium rise – it’s not a high rise. And it’s always been a really straight leg. Although my daughter, Evie, accuses me of wearing a flare. Just because it’s not a jegging. For me, even a straight leg looks wide at the bottom because my legs are thinAnd I tell her, “This is not a flare, it’s what they call a straight leg.”

Here, Tonne shares stories behind some of the best-loved pictures of her in jeans. Photographs by Arthur Elgort and Nicholas Vreeland. 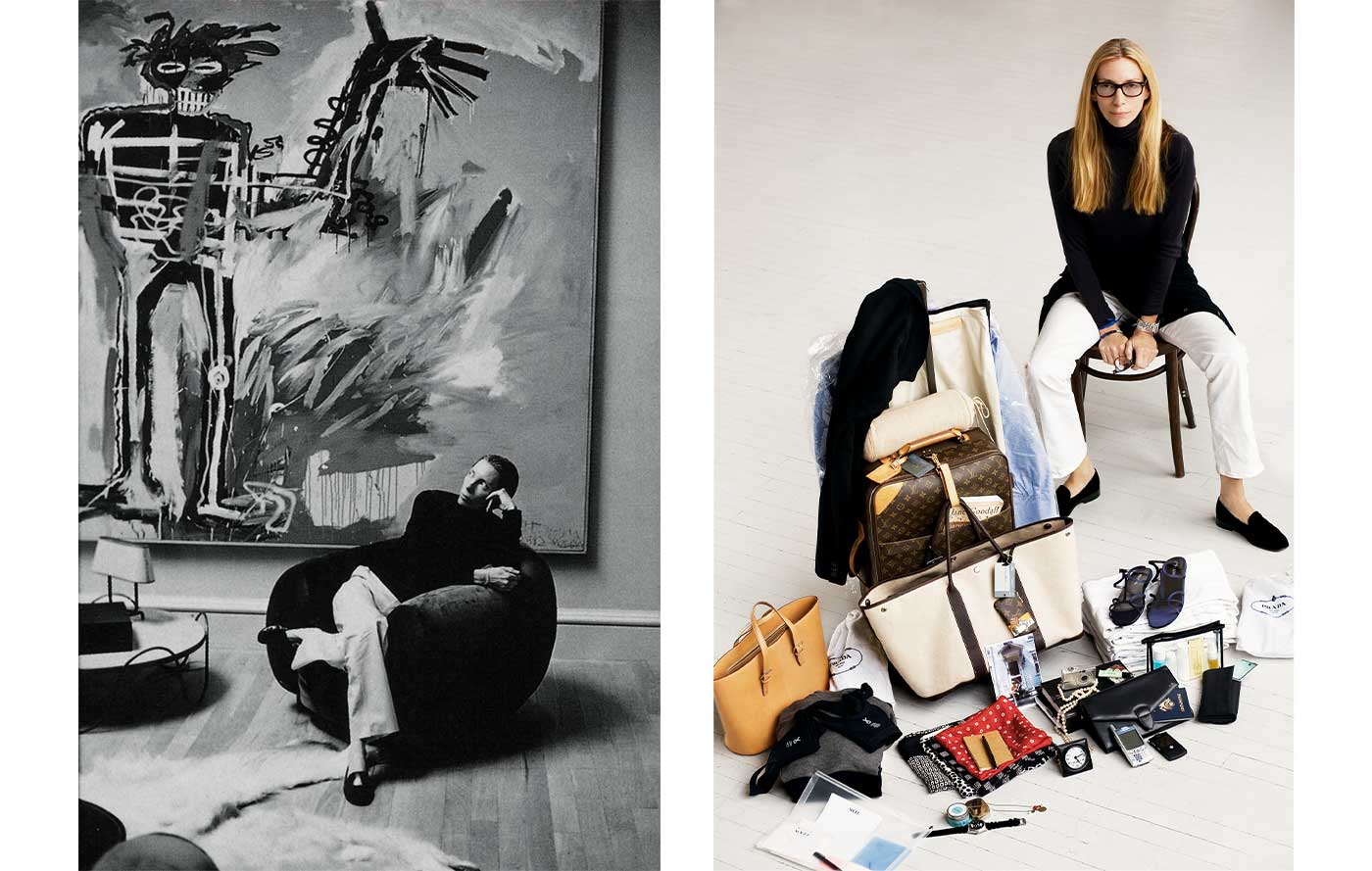 LEFT: “This is one of my favorite photographs, because Arthur [Elgort] took it when we were shooting at Stephanie Seymour’s house. I’m wearing a pair of light jeans. That Basquiat in the background is an incredible painting. People sometimes mistake this house for my house. I wish it were, but it’s not. In the picture I’m doing what we jokingly call ‘interpretive modeling.’ I stand in while he sets up the picture. It’s just a suggestion of a way to position the model. And with Arthur it was always really fun.”

RIGHT: “This is from a packing story that ran in Vogue in June, 2007, called “Fold Everything.” Arthur took this photograph. You know, because I never check a bag. Never. So this is the 101 on how to pack, for me. All of it fits into this Louis Vuitton bag, and that is the bag I always take. And those are the jeans, stacked. I usually take four pairs so that I can wear a fresh pair every day. And then it’s really simple: A dark top and a light bottom, and so easy. And a Charvet scarf. That’s my favorite thing.” 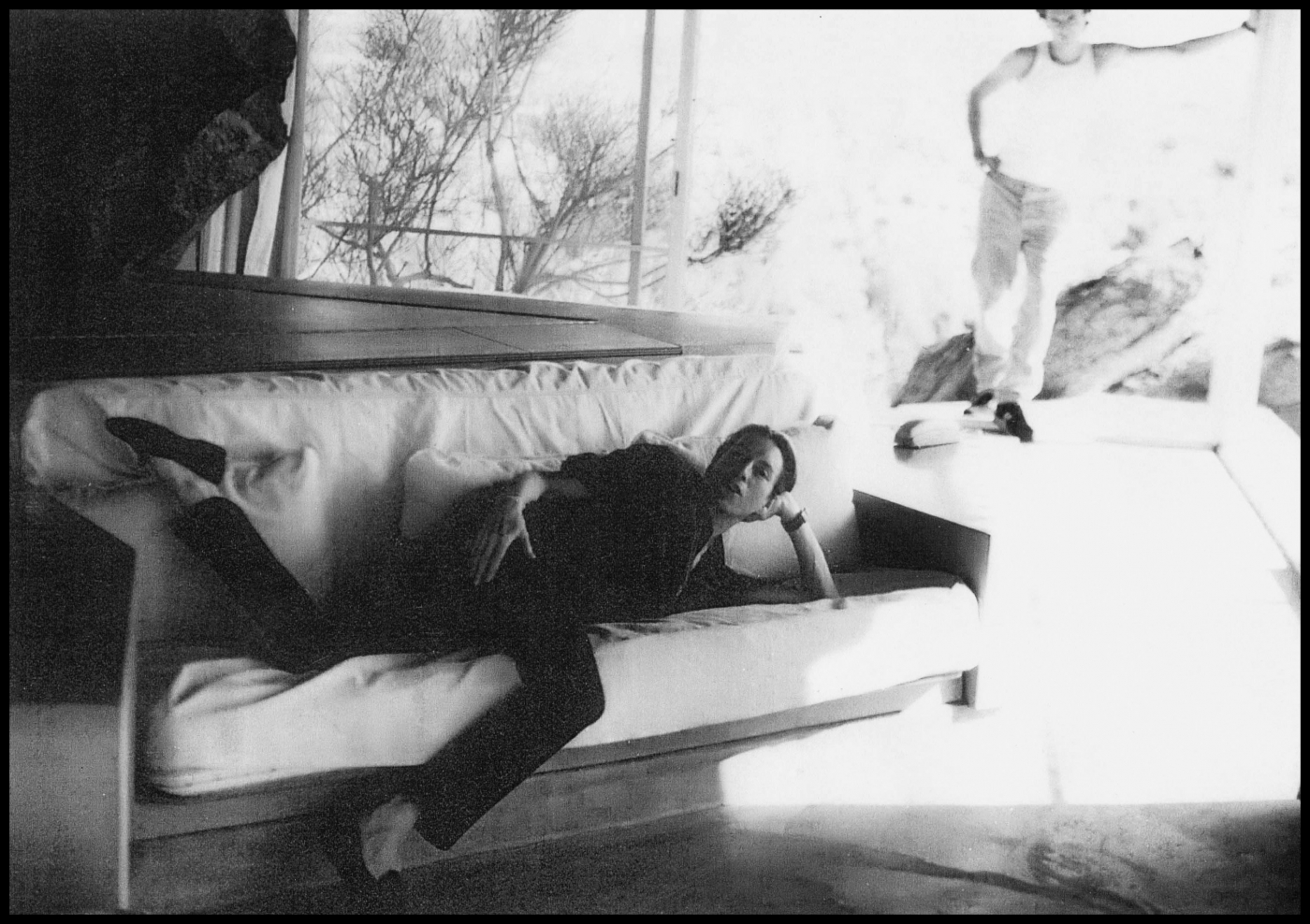 ABOVE: “This is in Palm Springs at the house of the architect, Albert Frey. That was for an April 2000 story about minimalism in Vogue, and I was ‘interpretive modeling’ for Arthur again. The guy behind us must be one of his assistants.” 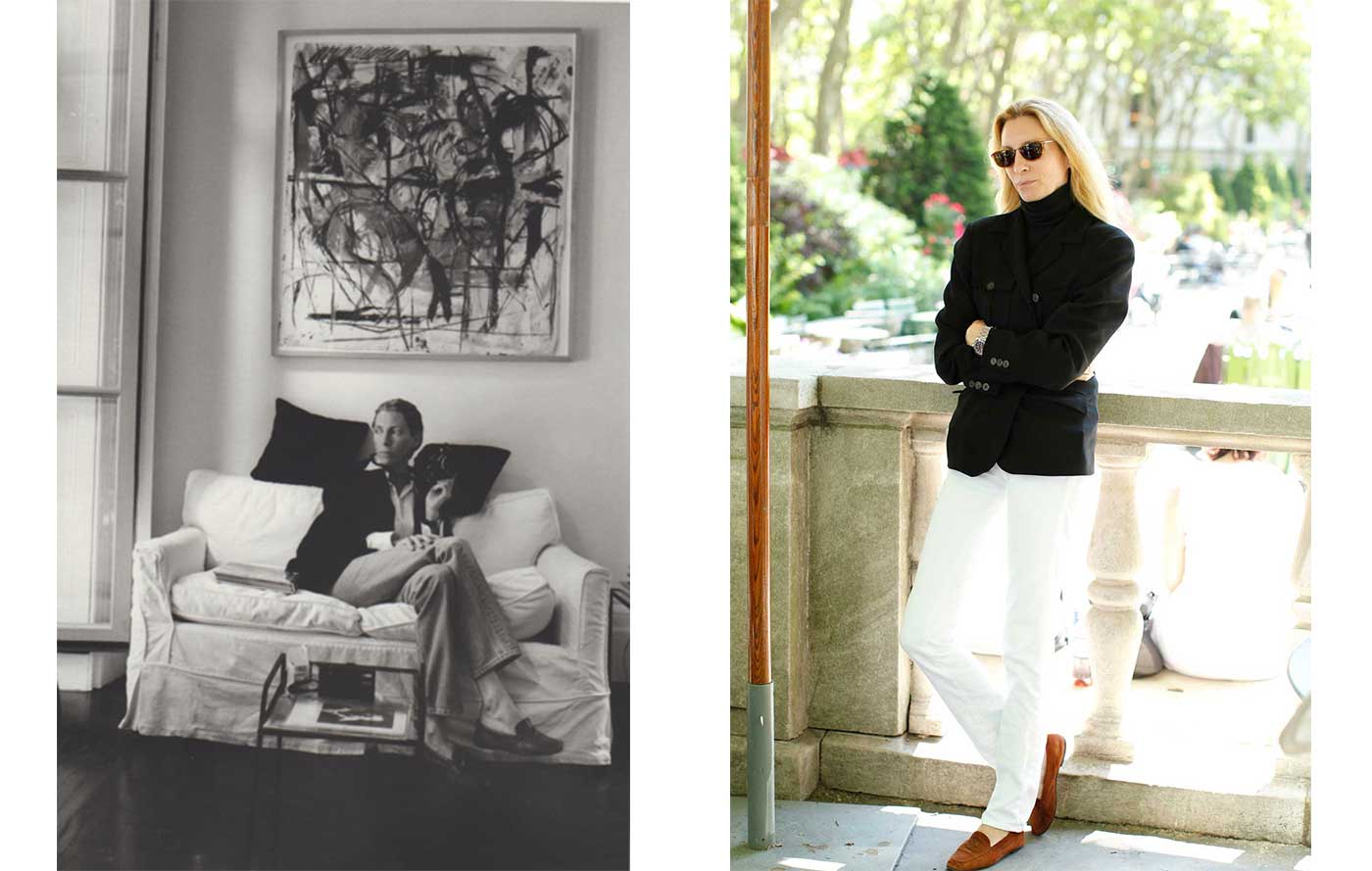 LEFT: “My friend Nicky Vreeland took this picture of me at home. Behind me is a painting by an artist named David Hacker. I have a number of his paintings. I was taking pictures, because I like to take photographs, and I was just sitting there talking to Nicky, who is a photographer. He is also a monk. French Vanity Fair recently did a story on him and they are doing a documentary on him, too. He is the grandson on Diana Vreeland and became a monk maybe 30 years ago and he is the only western abbot ever appointed to a monastery by his holiness the Dalai Lama to a monastery. He lives in my building, upstairs, and he has a monastery in Dharamsala.”

RIGHT: “This portrait was taken for W when I won the CFDA Eleanor Lambert Award in 2010. They ran it when they announced who was getting the award that year. It’s a flat shoe, a white jean, a turtleneck and a jacket, and it was taken in Bryant Park.”