It makes perfect sense that Greg Chait, the designer behind the cashmere-only knitwear line The Elder Statesman, wears jeans every day. Is there a bottom that goes better with the gorgeous sweaters he specializes in making? Not if you live in Los Angeles and like your luxury laid-back. No, the only thing that might compliment the rich and relaxed vibe of Greg’s cozy surf ponchos and handspun pashmina button-downs as effectively as a pair of blue jeans is maybe a bathing suit, and a beach.

We met up with Greg in his West Hollywood studio, a rustic bungalow tucked into a sweet little street behind the more glossy Sunset Plaza shops, to talk about the (only) jeans he wears: vintage Levi’s 505s. An especially utilitarian choice for a guy who once had a stake in designer denim (Greg was a partner in the Australian jeans brand Tsubi, now called Ksubi, before he launched Statesman), and who today makes some the most decadent and delicate sweaters in town, we thought. Until it became abundantly and unmistakably clear that what The Elder Statesman’s cashmere and Levi’s 505s have in common – Quality with a capital Q – trumps all.

Where does the story of your 505s begin?

Shortly after I left Tsubi – maybe a little during – around 2006. I went to What Goes Around Comes Around in New York and got a pair of 505s. It wasn’t a conscious decision, I just wanted to get a pair of jeans and tailor them to me. I wore them every day for like two years. Now, every time I go to New York, I go to What Goes Around Comes Around, and one out of five times I find a pair of 505s I like. I actually have them all here, I’ll show you…[goes to his closet]

…These are the three I’ve been wearing for the last three years. I’m always looking for fraying at the top of the waistband. And they have to be 505s. And the ones I have on are probably my favorite, but I don’t know.

What it is it about the fit that you like?

It’s like – they’re straight, but they’re not super tight. But they’re slim at the same time. And they don’t bow out the way that some jeans can. 501s bow out on me. And these, they just…they’re comfortable but they can be versatile. Especially in a darker wash. You can dress it up a bit because it’s darker. It’s my everyday: white t-shirt, jeans, sneakers.

But you have them altered, too?

I tweak them a little bit. I shave them down in the leg on the sides and then I do a couple other little tweaks.

Can you explain, or are they secret?

Yeah, it’s my trick. But what’s funny is that not every alteration is the same because they’re not all identical. I want them to not be too tight on the bottom. That’s what I need to get right, and then all of the other alterations are dependent on that. The length and the leg opening are the beginning. I know that sounds weird.

It’s about keeping the right proportions. And I’m eye-balling it.

Is this an obsession that you picked up from Tsubi?

I don’t know. I think it was more about style and functionality. Jeans are easy for my lifestyle, and then style-wise a 505 fits me just perfect. And when I hone in on something perfect…as I started designing more and more, my wardrobe contracted. I think that happens with designers – you wear less and less and you find things that just really work for you, so you don’t have to think about it. 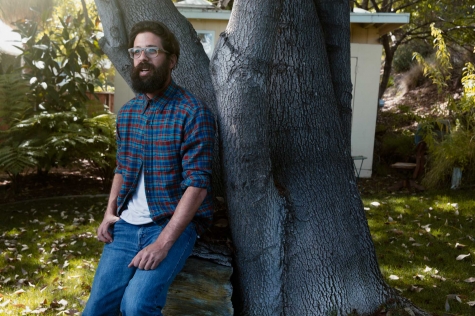 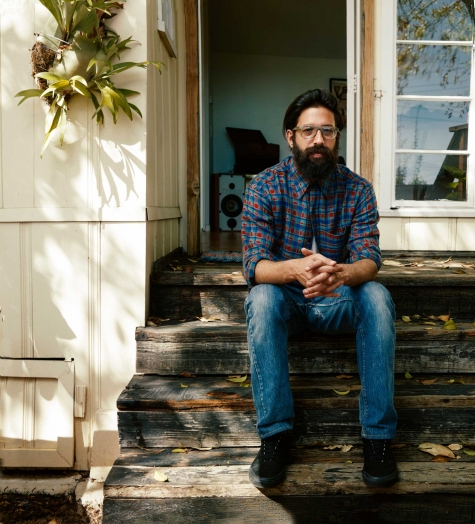 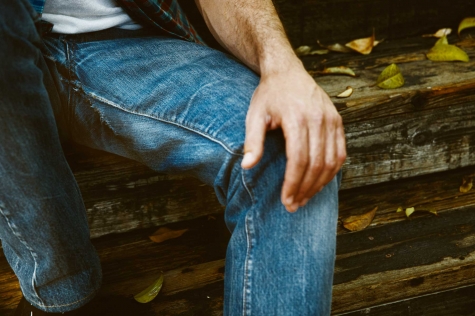 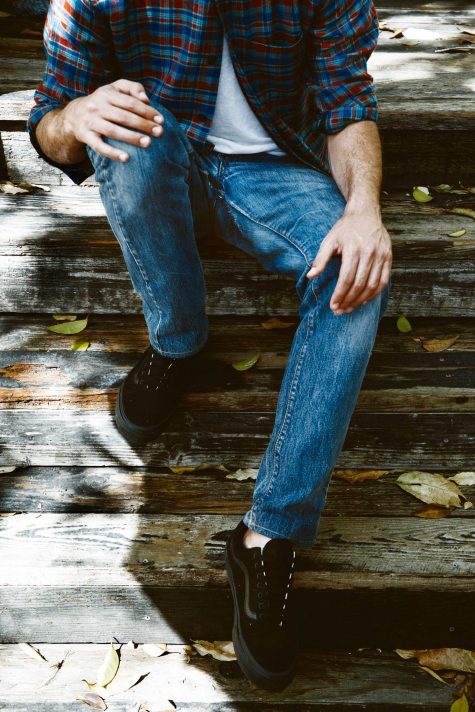 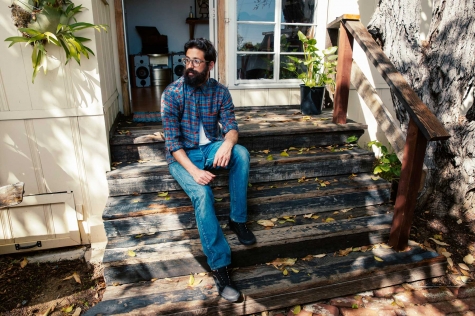 And they go well with your cashmere sweaters.

They sure do. That’s the other thing – I think there’s such quality with the 505. You don’t ever have to worry about that. It’s a pair of Levi’s. And then I’m always wearing something really special with them.

Why make a cashmere collection?

I got a blanket from a friend and that was it. I forget the name of the brand, but it was a 120-gauge, basic, solid, tobacco-brown cashmere blanket. And then I started looking for more…I started collecting blankets, but I couldn’t find the one I wanted, and I thought, If I’m looking for this then there must be other people looking for this. I thought The Elder Statesman was just going to be blankets. I didn’t know much about the business, but I just started figuring it out, and I launched in 2007.

And you started wearing these jeans around that time?

And you pretty much wear them every day?

Do you ever get bored of them?

Before we forget, tell us about the shirt you’re wearing today.

This is a handspun and handwoven pashmina shirt. It’s my version of a flannel. It is available now. You can get it at Maxfield.

What’s the first word that comes to mind when you think about these jeans?

What shoe do you wear with them?

What’s the prettiest place they’ve ever been?

A lot of places – that’s a hard one. They have literally been with me everywhere. Tangier. Baja California. Big Sur. The Rockies in Colorado. Taos. Guatemala. Costa Rica. Chile. A lot of places.

What’s the weirdest place your jeans have been?

A wedding. A very casual wedding. One of my best friend’s. I wore them with a button-down. The wedding was at the Beverly Hills Courthouse and the the reception was at the Hotel Bel Air.

How would you feel if you lost these jeans?

Very, very upset. But I would have to get over it. I couldn’t go back and get the same pair. I can find ones like these, but I could never find these, exactly.

If you could have multiple pairs of these jeans, how many would you need to feel satisfied?

Just one or two at any given time.

If these jeans could talk, what would they say?

You don’t wash them?

Just their previous owners. But no, not since I’ve had them.

Has anyone ever complimented you on them?

Lots of times. Yeah, just, Nice jeans. I don’t remember anyone in particular. But I’ve showed up at a lot of photo shoots and the stylists always tell me to wear these. So that’s usually a good sign.

What are the silliest jeans you’ve ever worn?

When I was 12, I wore Cross Colours jeans – shorts, really big, long ones. Purple ones. I was a freshman in high school. It was 1993. They were awesome.

Do you remember where you got them?

The mall. They were awful.

When did you break up with those jeans?

When I got de-pantsed in them. My best friend growing up did it at school when we were running from the security guard, and I fell. And that’s when I stopped wearing them. They weren’t safe. If I was going to wear them, I needed to be able to get away from the school security guard.

Is there a jean that you should have broken up with sooner than you did?

Yeah. There were some jeans that holes in pretty obscene spots that I should have walked away from sooner.

Have you ever gone swimming in your jeans?

Not intentionally. I might have been thrown in a pool in my jeans once or twice. And then at the beach I think I’ve been taken out by a rogue wave or two.

Do you wear cashmere every day?

Yeah, I guess I do. Not if it’s really hot outside. But at home. At some point during every day I put cashmere on. Every day.