What is there to say about Soko that you can’t see in these photos? They show you she’s funny, loveable, and soulful with a penchant for crazy, cool denim in a super-personal mix that borders on cute (think little white blouse with bow tie) and punk (big jackets with pins and badges). What theses pictures don’t reveal, of course, is her talent for singing, songwriting, acting, DJing…everything. Soko is French (raised in Bordeaux), and is now, after some time living in Paris, based in L.A.. She’s been in several films – if you saw Spike Jonze’s Her, you heard Soko’s voice as one of the intelligent computer’s voices – and she has a few more coming up, but she was mum on exactly what they are (darn). Also, her song “We Might be Dead Tomorrow” was the theme of that viral video “First Kiss” (from by the clothing label Wren) which she also happened to appear in, sweetly kissing a stranger. Soko’s next record, produced by Ross Robinson (he did The Cure!) comes out next year.

But most of these facts you can find online. I wasn’t sure what to expect when we got to meet Soko in person on the New York top of her U.S. tour in October. I mean, I’ve interviewed her before over the phone for another website, and she was great. And I follow her on Instagram (@sokothecat), where she’s hugging Roberto Cavalli one moment, playing a show naked from the waist up – save for some suspenders – the next, and then in another pic giving a shout-out to Chloé, whose clothes she’s wearing onstage. What I learned from meeting her (aside from the fact that she is sweet and smart and a good hugger) is that she and her life are really like that! She can be tubing down a river in Florida one week and then taking off for Dubai a week or two later. And her style follows suit. Soko’s into mom jeans – vintage. On their own they’re funny. Paired with her favorite leather jacket and a hat from L.A. milliner Gladys Tamez, they’re awesome and totally her. Same for a pair of oversized Lee overalls, which she pairs with creepers (Chanel!). It’s a lot to take in, but I did, and loved it.

Tell us about your jacket! Where did you get it?

I have no idea. Some vintage store. I was actually in Paris just now and just got it back from my ex-girlfriend that I hadn’t seen in three years. She just gave it to me. Well, through my brother. She said, I’m coming to New York, I want to come to your shows. Is there anything I can bring you? Yeah! My favorite jeans jacket! I had to surgery it so many times because it’s falling apart. I put patches on it, like this little ‘Love Me’ thing – because I’m friends with Curtis Kulig, who makes these. And then this ‘Female Trouble’ part, because I love John Waters.

What was it about this jacket that made you buy it?

Light denim! Looks completely gross. It’s oversized. It has pockets [she pulls something out of her pocket]. Secret receipt from a year ago… Where was I? Health food store…typical me. 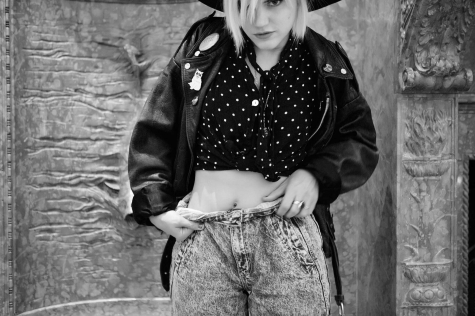 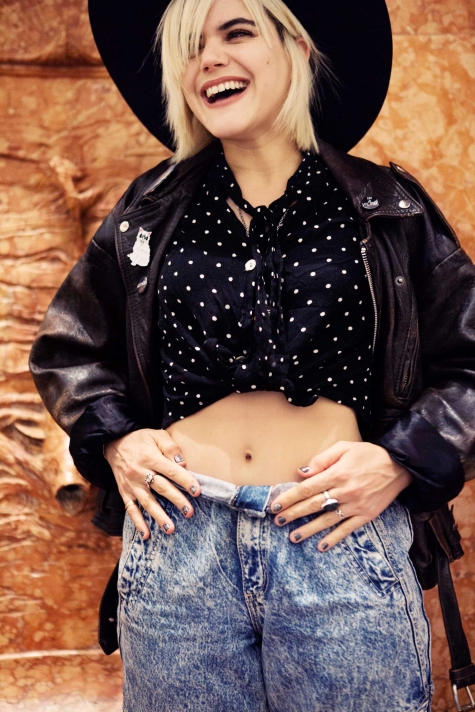 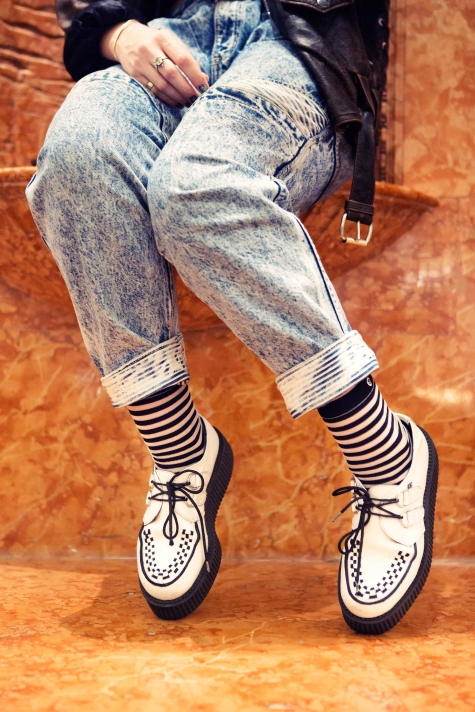 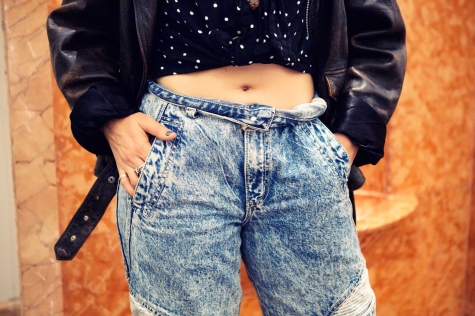 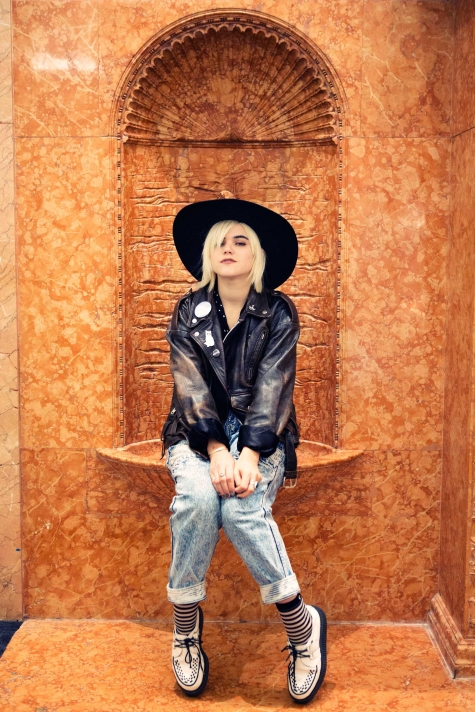 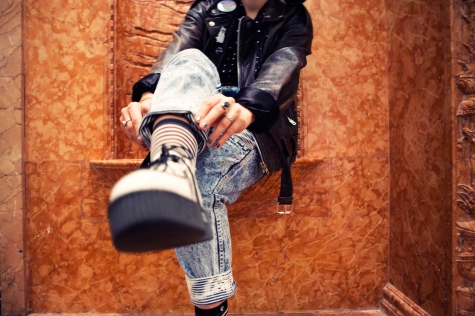 Very well. I loved everything about Florida. But we had a really good show in Savannah. I had never even heard of it, and it was really awesome. We played a little record store called Gray Face. It was this tiny, tiny thing with so many records, and the place was packed. All the girls in there looked like complete freaks in the best sense of the word. And then I sang a song and asked if everyone would take their tops off – and they did. Boys and girls. It was like 100 people dancing around with their tops off and it was awesome. And then, we didn’t have a place to stay, and these girls we met at the show let us stay with them. It ended up being that we stayed in Houdini’s old house. And there was a safe that hadn’t been opened for like 100 years and my guitar player was like, ‘I can open that!’ He touched it – code that was fake – like he was going to open it. And it opened. It was crazy. So Savannah was pretty awesome. But then everything in Florida was amazing. In Gainesville, we went tubing down the river. It was so fun we did it the next day in Orlando. Every day we went to the beach. And then we went to Universal Studios. I screamed so much on the Simpsons ride that I lost my voice. I did a few shows without even being able to talk. I felt like I had been arrested by the fun police. And I was punished for having too much on this tour – like the fun police said this is not enough work for you, you’re having too much fun. We’re going to make it hard. Get ready to suffer! So then I suffered.

What is that patch?

I sewed it on. I think I got it in eBay. I get weird patches on eBay.

Describe your jacket in one word.

If your jacket could talk, what would it say about you?

Oh, my god. It’s been on so many adventures. It would tell a lot of naughty stories. It’s been kind of all around the world. I don’t know what I can reveal right now.

What’s the coolest place it’s been?

I don’t know if the jacket is the right thing to talk about. I feel like my overalls have had so many more adventures. Same with my pants. Can we talk about my jeans, too?

I got them in New York, in Narnia. Do you know that place? It’s a vintage store on the Lower East Side. And they’re the best because they’re mom jeans. Acid washed. And awesome.

When did you get them?

So they have better stories than the jacket?

What’s the craziest place they’ve been?

They’ve been to Coachella.

Do you wear them when you play?

No. But I wear them all the time. I wore them in the studio when I was recording, because you kind of want to be in pajamas all day. These jeans kind of feel like I’m in my pajamas. But they are very butt unflattering. So you can’t really wear them when you play. 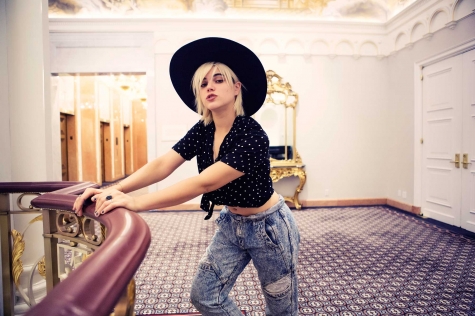 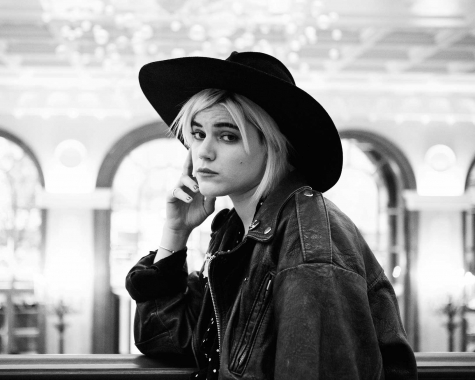 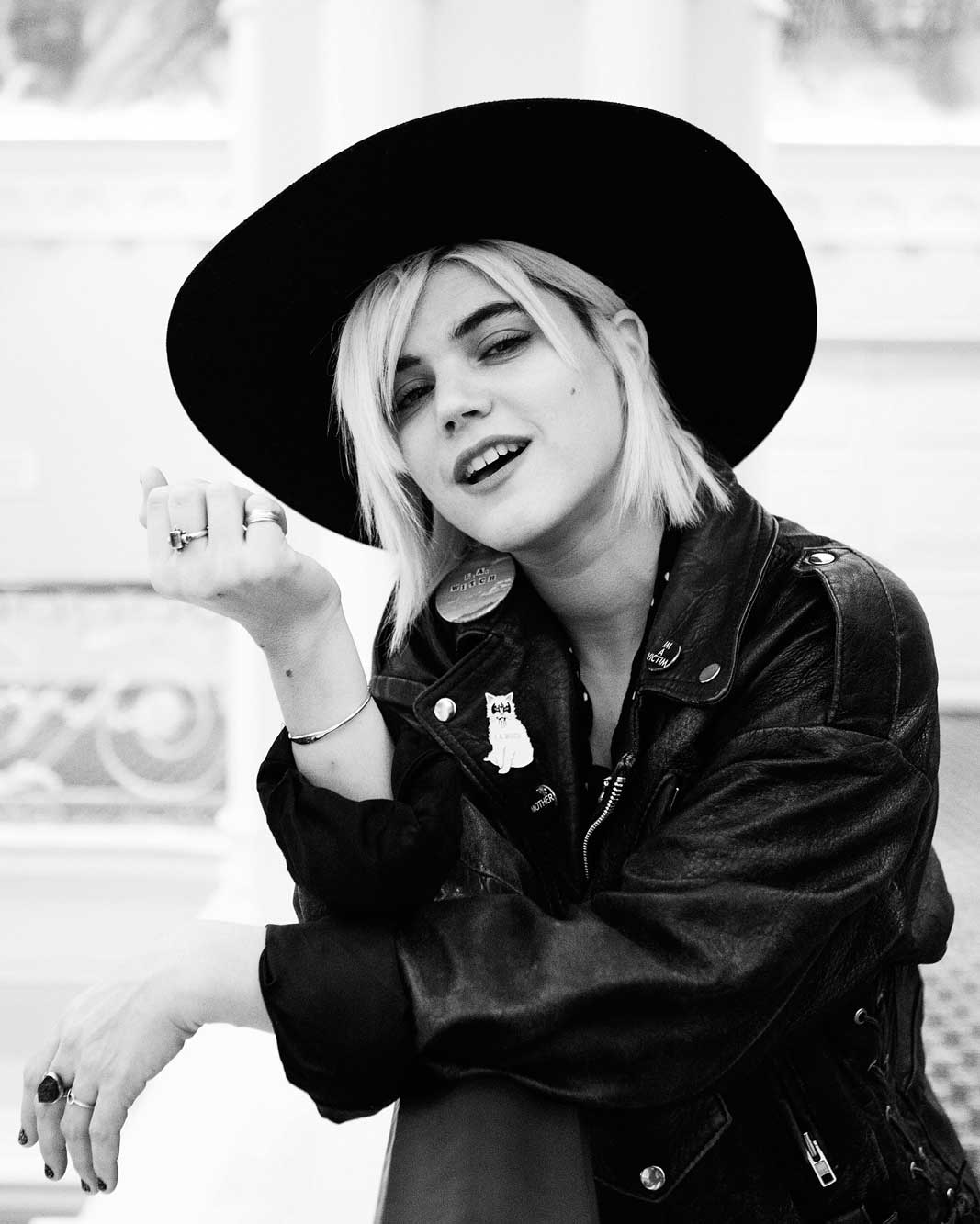 If you could describe your jeans for us in one word?

I don’t know. I have some with studs. I have some with zippers here [she points to her cuffs]. Some that are completely fitted. As soon as I see acid-washed jeans and they look 90s and ridiculous and unflattering, I want to buy them.

Did you wear them when you were younger?

No, I was too young. I used to make fun of my mom for wearing mom jeans. I was like, This is not the way to wear pants, you can’t wear them under your tits! You have to pull them down! I kept literally begging my mom… I was really upset [laughs].

Do you want to talk about your overalls?

I got them in L.A. at American Rag. They’re Lee. They’re like old workers’ overalls.

What’s that zipper around the waist?

It’s so you could zip on a little…

I brought all my favorite denim. Even my red Levi’s mom jeans. These I got in London. I also got a leather jacket at the same time. It was like, This is the best leather jacket I’ve ever seen! 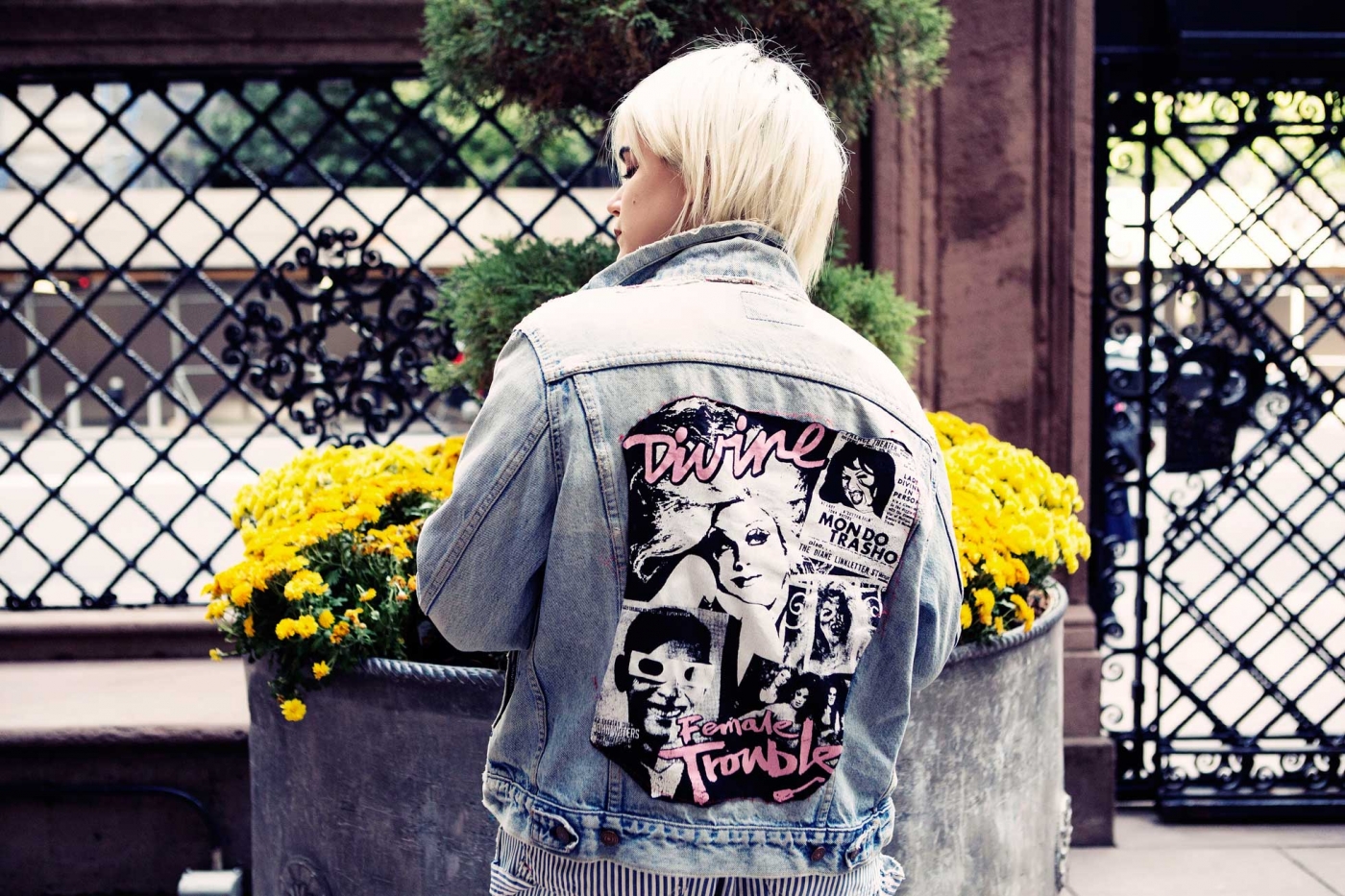 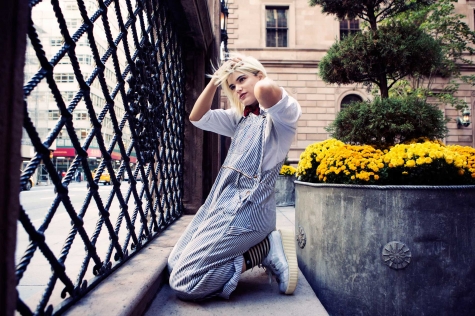 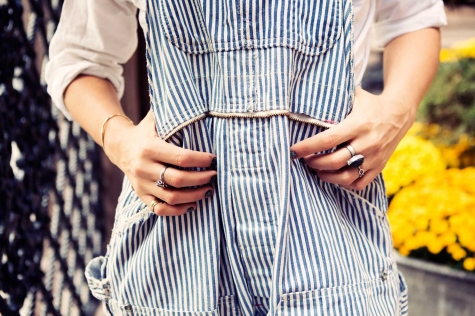 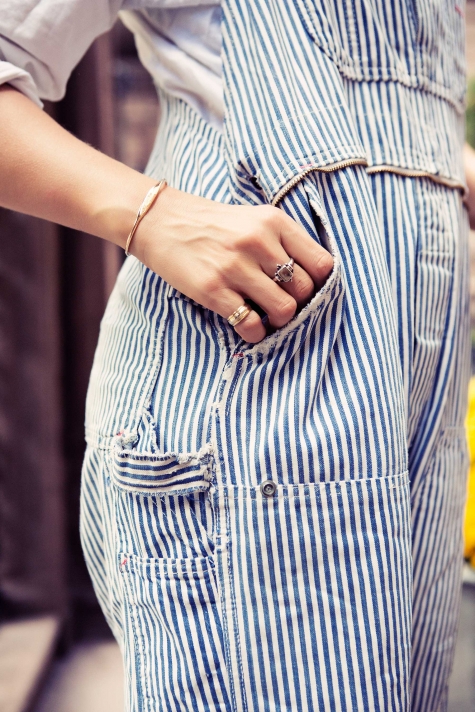 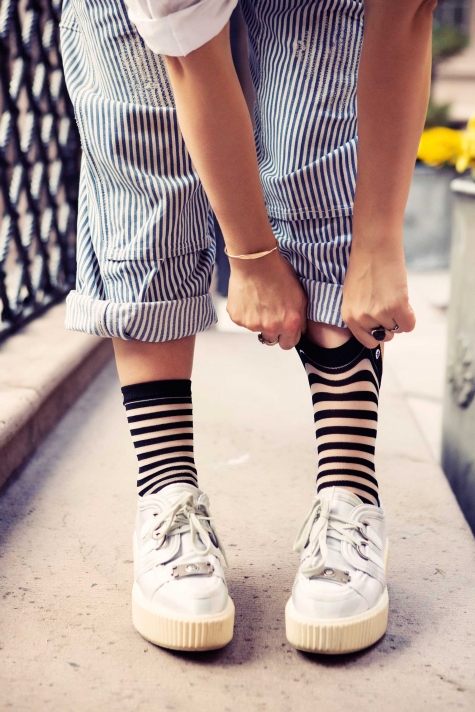 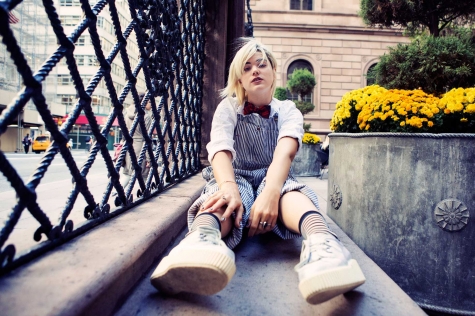 Do you remember the first pair of jeans you ever had?

They were probably Levi’s 501s. Borrowed from my brothers. I have three brothers. I dressed a lot like a boy when I was a kid. I had their clothes.

How many pairs of jeans do you have?

Oh, man. How many clothes do I have? How many fucking closets do you think I have? I have one closet in Paris. Actually two. Three closets in L.A. That makes about a good 30-40 pairs of jeans.

I like it sometimes. I have a bunch of dresses. I definitely feel more strong and badass and ballsy when I’m wearing pants. I have a song called ‘Who Wears the Pants.’ It’s going to be on the next record.

A super dork. Why? because I’m half superhero, but half a dork. So I feel half powerful and half dorky because it’s mom jeans and unflattering. So it makes me a superdork.