You may not have heard of Levi’s Eureka Innovation Lab – but if you love jeans, you should know about it. From the outside, it’s an unassuming brick building in San Francisco’s Embarcadero. On the inside, though, magic happens. Here, the prototypes for new denim developments that shape not just the Levi’s we live in, but the entire industry – from washes, to treatments, to advances in sustainability – are made. The Lab houses a sewing room, a testing facility (complete with an in-house chemist), indigo vats, lasers, a laundry, a tailoring shop…plus, some things we didn’t even see because they are probably too top secret. It’s only been open a year, but we’d heard quite a bit about this place, and we couldn’t believe that we were lucky enough to see it. Even luckier, we got to have Levi’s Jonathan Cheung, SVP of global design, show us around.

Jonathan’s resume, in short, goes like this: Born in Grantham, U.K. and attends art school and fashion school (where everyone, including him, is obsessed with 501s, natch); he goes on to work in Milan designing denim for Moschino and Iceberg (his colleagues at Iceberg? Only Marc Jacobs and Anna Sui); he starts a denim manufacturing consulting business in China; and then, after a couple of stints working for other big brands, he finds himself at Levi’s – first freelancing for Made & Crafted in Amsterdam, then in merchandising, and now…here he is, running the company’s global design operations. Major.

That day in the lab Jonathan told us about how he’s come full circle from his days as a fashion student and young designer wearing 501s (when the Nick Kamen launderette ad came on before Back to the Future in the cinema, he said, everyone went mad, loved it so much they screamed). And, actually, the jeans Jonathan wore for his shoot at the Lab had also been around a few times…and found their way back to him (keep reading for that story, which spans 17 years, three countries, and three people). They are a simple pair – non-selvedge 501s made in the 90s with a dark-rinse wash, originally. For a guy who’s seen a lot of denim in his life, and who owns many, many pairs of 501s (some much fancier than these), it was a telling choice. As he explained, it’s not necessarily about a pedigree, but the personal memories we make when we live in our Levi’s.

Your 501s have had quite a journey. Tell us about it, from the beginning.

They were made in the mid-90s in the USA. In Murphy, North Carolina to be precise. My time with them begins in Milan, where I was working as a fashion designer – I wore them backstage at the shows pushing girls out on the catwalk, late at night draping dresses with my mouth full of pins, at the factories. And when I moved to London at the end of the century, they were packed away and forgotten. Fast forward to 2001 and my girlfriend (now wife) Zoe becomes pregnant with our first child. She finds these 501s and they become her pregnancy jeans. They carry Zoe and our yet-to-be-born baby girl, Mila…and then get packed away again. Ten years later, I’m working for Levi’s and living in California. I rediscover them whilst unpacking our belongings, and think, the 501s have returned to their spiritual home. They still fit (yes!), so they get freshened up with a little repair and custom tapering. Every time I look at them, I think about their journey, which is my journey, my wife’s, our baby girl’s… I reckon there’s another decade of life in them. Then they’ll be cut into shorts. Zoe may claim them back. Or Mila. 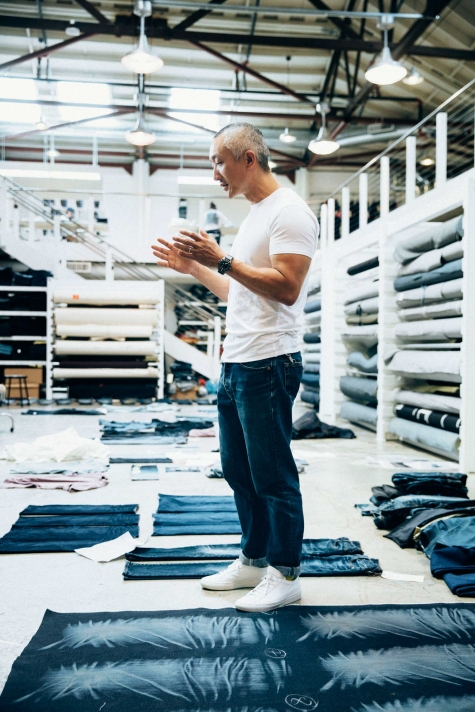 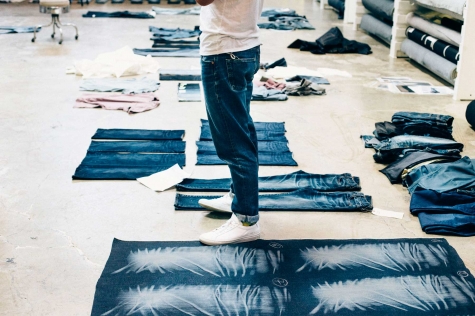 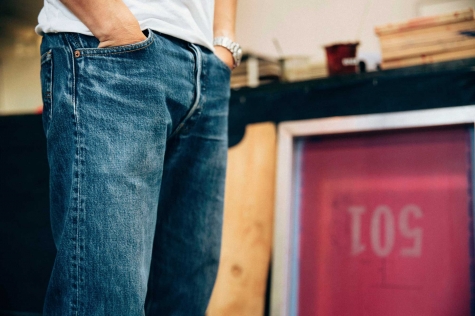 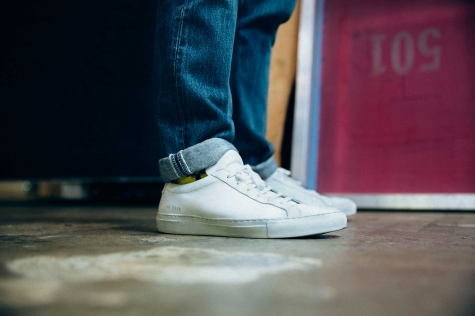 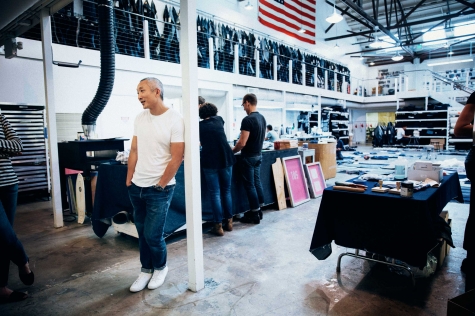 We noticed they’re not selvedge – that hallmark of what many consider to be better denim. Does that matter to you?

Yeah, these are one of my cheaper pairs [laughs]. Actually, someone here in the Lab shouted, “Normcore!” at me today. I’m not really sure what to think of that [laughs]. I’m still choosy about my jeans, and I’m interested in the make and the heritage of them. But with these it’s about the memories, the emotional attachments.

What is it about denim that you love so much?

One is a pure design and industrial angle. You look at Dieter Rams or Jony Ive – they are looking for purity of design. And denim is that, it’s design that’s evolved; it’s practical, you wear it for every occasion. Poor people, rich people. You could be watching a polo match, or you could be digging up a road or ploughing a field in it.

Then, I look at in the history of the human species. I’m floating up in outer space and listening to David Bowie, and I’m watching the humans on Earth go by. In terms of clothing, if something is going to register, blue jeans are going to register.

And for me, it’s also about them being the best-performing thing ever. Denim has climbed mountains, it’s skateboarded. When I look at the first mountain bikers on Mt. Tam[alpais], they were wearing Levi’s and wrapping Levi’s around their handlebars to use as padding. I’ve see people climbing in Yosemite in it.

What do you need your Levi’s to be, always?

If your jeans were to give us all a word of advice, what would they say?

Be curious. Life is not a linear journey.

Where’s the most important place your jeans have been?

With me on one of the pyramids at Giza when I was a teenager.

Was there ever a pair you had that got away?

I wish I had kept all the vintage selvedge 501s that I wore in the 80s. I wore them to shreds, cut them up for shorts, and wore those till they fell apart.

Was there a pair you should have broken up with sooner?

Not really. I’ve pretty much worn simple, five-pocket jeans all my life.

No, I am not alone; I represent the short, middle-aged, denim-nerdy male demographic – and there’s more than one of us. (Though, I might be the only one living in Mill Valley [laughs]). 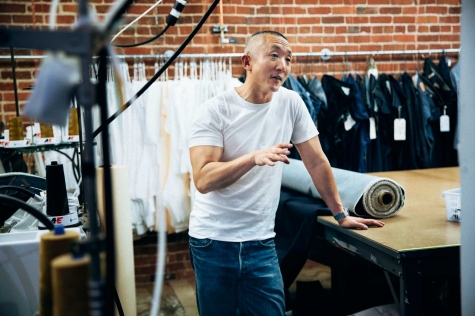 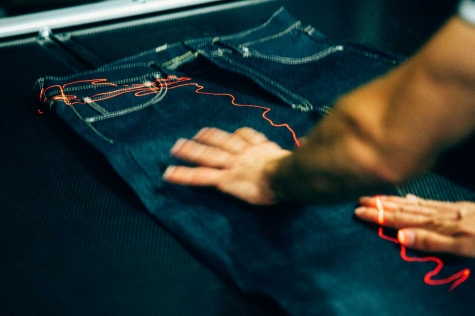 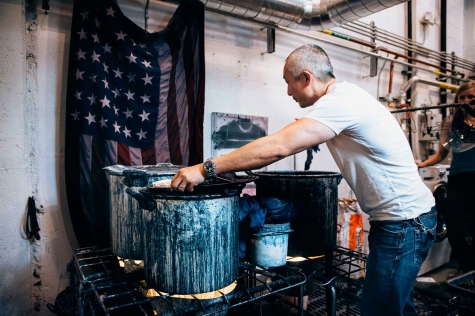 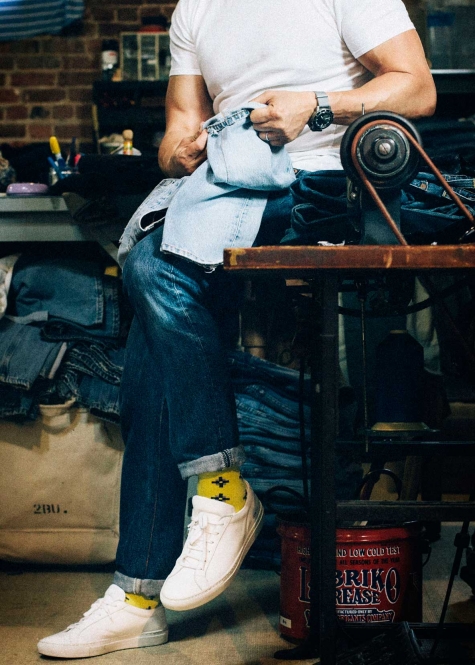 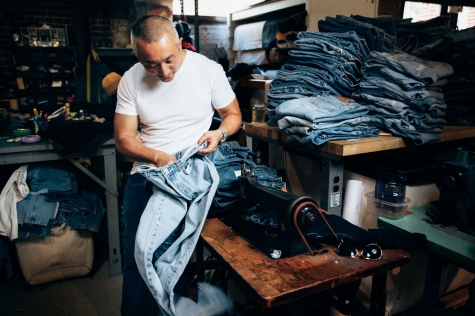 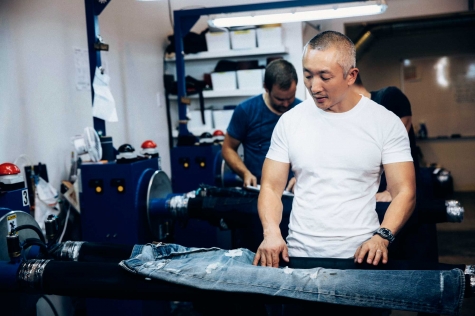 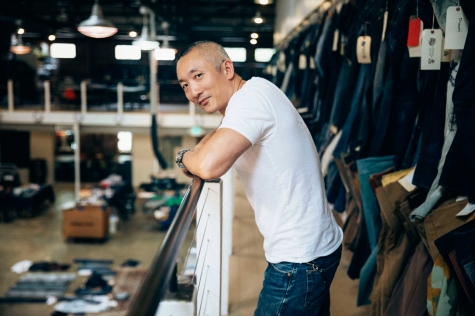 Tell us about your top three jeans of all time.

Is there a pair you still own from a previous life?

I’ve collected denim for years, so there are many; mainly selvedge, and a lot of Japanese denim.

How many pairs do need to have to feel satisfied?

I stopped counting at 50, but there have been times when I wore one pair for a whole year.

What do your Levi’s reveal about the way that you live on a daily basis?

You can really get forensic with them, and deduce the type of lifestyle the wearer has, due to the way the indigo wears off. Looking at my jeans through the years, for example, I can see when the iPhone arrived; suddenly a rectangular ‘shadow’ appeared on the left pocket. Or there’s a patch, because when I was traveling a lot, by carry-on would brush against my leg. I can see myself walking from terminal to terminal – the journey left on my jeans.

Is there something you do only in your Levi’s?

It’s probably easier to ask if there’s something I don’t do wearing jeans.

On what occasion will only a pair of them do?

Talking to you now in this interview.

If you had to replace them with something else, what would it be?

That would be kind of a life-changer, considering my career!

Asleep or wet. Usually, not at the same time.

Jonathan’s all-time favorite pairs No. 2 and 3, click for details. 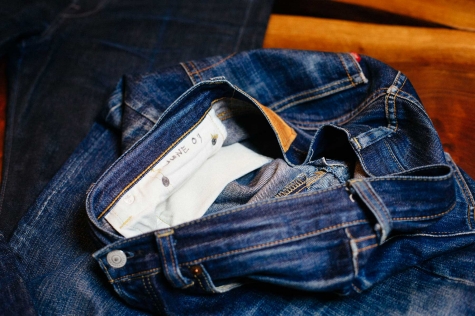 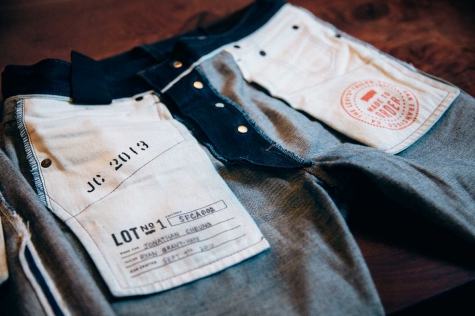 How Michael Giordano Lives in His Levi’s