In May of last year, Eva Chen met our Jane for breakfast at The Smile in Nolita. Old friends from their days of being assistants at Elle, they caught up on all things personal and professional, including Eva’s post-Teen Vogue, post-freelance return to Condé Nast to help edit Lucky, and Jane’s not-yet-realized idea for a website about denim. “Wow,” Eva said before challenging Jane’s concept and claim that jeans are just about the most personal piece of clothing, ever. “I never wear jeans. Never, Jane wondered, before realizing that in fact she hadn’t seen her very personal-style-savvy friend in anything but skirts and dresses since, well…”Really. No. Never.”

Needless to say, a lot has happened since then – Eva is now the Editor-in-Chief of Lucky, Jean Stories is live and going strong, and look who’s here wearing no less than five pairs of jeans and a custom-made denim skirt. And because the August issue of Lucky – on newsstands nationwide today – is the Denim Special, we thought it a perfect time to talk to Eva about her “jeanification,” as she calls it (her Instagram feed, excerpted below, is maybe the best evidence of the editor’s switch from denim-wary to denim-wearing). Leave it to Eva, as thoughtful a women’s mag EIC as she is a shopper, to not only observe the similarities between jeans and mascara, but own some of the coolest pairs out there for fall (see the patched Paiges she’s in above). “At Lucky we’re so much about personal style, and wearing whatever you want, and expressing yourself,” she said. “Jeans are such a huge part of that.”

And so, it is with lots of love and just a teeny bit of satisfaction that we tell our very stylish, very smart, and very true friend: We told you so.

What do you love most about Paige jeans and the Jimmy Jimmy skinny you’re wearing?

I generally tend to love Paige jeans. They’re basically my sweatpant jean-slash-comfort jean because they’re so soft, and they break in so easily. With Paige you don’t have that incubation period of being intensely uncomfortable while you wait for the denim to soften up a bit. It’s supersoft on the first wear.

Patched jeans, you’re into them?

We have a story in the new issue that’s all about embellished denim and patchwork denim, and I wanted to wear something that spoke to that story. That’s my not-so-complicated thinking behind these jeans.

We love how you’re wearing them.

Yeah, when I wear denim I very rarely wear it with something like a white t-shirt. Being someone who has reluctantly-slash-only very recently embraced denim, it helps me to pair jeans with a crazy sweatshirt, which is what I do on the weekends, or give it a dramatic shoe.

We can’t imagine life without denim. How come you’ve only recently started wearing it?

In my twenties I just tended to wear a lot of skirts and dresses that were easy. For utility. With dresses, you pull them on and you’re done with your outfit. And I’m not really a uniform-dresser. I have so much respect for people who are uniform dressers, but I don’t think I could ever commit to that jean, button down shirt, and blazer uniform, which looks great on so many of my friends, by the way. I think I’m just too fashion ADD.

So what advice would you give women who are, like you, newly into jeans, or maybe just getting back into wearing them?

The most important thing for a woman to remember when wearing jeans – and I say this in my August editor’s letter, too – is that buying a pair of jeans is like shopping for a bra. That’s how long it can take; it’s that personal. You have to find something that works for you, and just because your best friend looks good in something doesn’t mean you will. Your best friend might look good in J Brand jeans, or you might love 501s, but that doesn’t work for everyone. There is not one universal jean that works for everyone.

HAIL TO THE CHIEF “I tend to wear denim with something a little more embellished,” says Eva Chen. I don’t think I could ever I could ever commit to that jean, button down shirt, and blazer uniform, which looks great on so many of my friends, by the way. I think I’m just too fashion ADD.” Paige Jimmy Jimmy skinny in Marcy, McQ sweater, Sportmax mules, and Fendi bag.

We totally agree. What else is in your August issue?

August is the denim issue, so there’s a serious amount of denim – we have a story about patchwork denim, which I mentioned. There’s this DKNY jean that’s stitched in patches, which all of the editor’s here love. I actually bought those jeans, and I can’t wait to wear them. At the next cold snap we have I will bring them out.

We also have a story from writer Allison Davis who owns ten pairs of the same J Brand jeans. She’s written this essay about how she’s tried every other jean – culottes and boyfriend jeans, everything – and basically she’s realized that she will wear this J Brand jean for the rest of her life. So it’s like a love letter.

And then we have a story in the center of the magazine called ‘Jean Therapy.’ Photographer Ben Morris shot it and Kate Young styled it. And it was inspired by – well, I shop every weekend, like every Lucky editor does, and we go to Soho and I was thinking about the way that young women shop in Soho…it’s not like Madison Avenue where people wear a look with a capital L when they go shopping. Everyone is Soho wears the same thing when they’re shopping. They’re either in jeans and a kind cool sneaker and a t-shirt, or they’re wearing jean cutoffs and an Alexander Wang t-shirt and Isabel Marant boots, and maybe a fringe Proenza bag. Everyone is so casual…everyone is wearing jeans. So, we did a whole story inspired by the way that Lucky editors dress on the weekend when they go shopping downtown. Of course, we shot the idealized fashion version of that look, but it’s captures shopping in Soho. You see the girls sitting at La Esquina and carrying their Acne and Stella McCartney shopping bags.

August is a very denim-heavy issue…but we love denim in every issue. Honestly. There isn’t an issue where we don’t have three or four or five or ten looks in denim.

What has being the editor of Lucky taught you about wearing jeans?

At Lucky we’re about personal style and wearing whatever you want, and expressing yourself, almost like art school. Everyone is encouraged to let their fashion freak flag fly. So we have one editor who wears Crocs, and she really makes them look good! And then we have another editor who only wears skirts and is super ladylike and very polished. Seeing the eclectic style of all of the editors here just really made me want to wear jeans more. 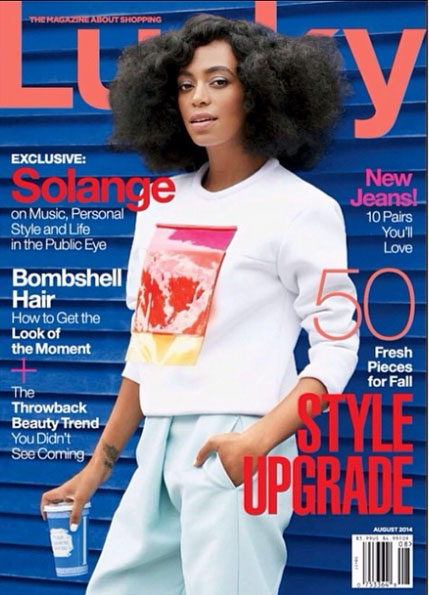 Lucky‘s August issue, with Solange Knowles on the cover, is the magazine’s Denim Special.

We remember when Jane told you she was starting a website about denim, you were like, Yeah, Wow, I never wear jeans.

I know! I said I never wear jeans! That was a little more than a year ago and I am swallowing my words.

So what jeans do you love right now?

Right now, I love Ayr jeans. Their skinny jeans. I really don’t ever wear skinny jeans. It’s almost always a boyfriend jean, for me, just because it’s like wearing sweatpants. But Ayr’s skinny jean is super, super comfortable and I have them in four colors.

The boyfriend jean that I love is relatively inexpensive pair from that brand Dittos, the Charlie jean. There’s something about this jean…it’s kind of a tapered boyfriend and it’s quite wide up top…I just love it. They’re almost like Hammer pants, except they’re boyfriend jeans.

Zara has great denim. I love all of Zara’s jeans. I actually have a few pair of Zara men’s jeans, which if you buy in smaller sizes they’re great. They do cool stuff with their men’s jeans and the fit is the cool I-don’t-really-care-but-I-do-care kind.

There’s also this Paige jean called the Tyler and Lily Destructed, and it’s basically a white, straight-leg, destroyed jean – and it’s my favorite (but it’s discontinued). It’s so destroyed there are no knees. There are a lot of pictures on Instagram of me wearing these jeans.

You’re always so ahead of the curve, we want to know what you love that nobody else might love…yet.

Denim skirts! There are so many denim shorts out there – I felt like I reached a saturation level with those. So, there’s this Levi’s jean skirt that I’ve had since I was 16 years old, and it’s been washed so many times it’s turned a pale, blue-white. It’s A-line, like lamp-shade shaped, and super destroyed and I was once so obsessed with this skirt that recently I emailed Melissa [Ladines, in PR] at Levi’s to see if they made a denim skirt like it – I told her that I wanted the exact skirt but a little bit bigger, and I wanted it in white. They didn’t, so they re-created that exact skirt for me, and I’ve ended up wearing it all summer. It’s my cut-off short replacement.

There must be something really special about the fit of that skirt if it was so hard to find – from Levi’s or anyone – that they had to custom build a new one for you. Let’s get specific. What is it that makes that skirt so special?

The problem with a lot of jean skirts is that they’re not bandage-y, but they’re too straight. What I like about my Levi’s one is that it’s very kick-y. It has a very structured shape to it so it kind of sticks out. It’s like wearing a lampshade. It kind of has that 60s mod A-line feeling.

Any other favorites you once had and loved?

I think everyone in my age bracket loved the Guess high-waisted zip ankle jean, in an acid-wash. I had those. When I lived in Cambridge, Massachusetts one summer when I was 16 there was a thrift shop that you could go to and buy clothes by the pound. I bought a pair of men’s Levi’s that were a very pale blue, like a Dad wash, like 501s, and I wore those a lot. And then the jean skirt, which I wore from the time I was 16 to 20, until it started to curl up at the edges, and it just became obscenely short. I kept that skirt as a reminder of the most ultimate jean skirt I ever owned in my life.

The Editor (and her jeans) in action on Instagram. Top Row: Wearing Dittos Brand Charlie boyfriends; Middle Row, from left: In her custom-made Levi’s mini-skirt, the Paige denim Tyler and Lily pair she loves, in white Genetics; Bottom Row: All around town in her new favorite Ayr skinnies.

And now, some Jean Stories standards: What’s the first word that comes to mind when you think about your jeans?

Personal. Individual. I always compare denim shopping to shopping for bras…or mascara. These are very personal things and you have to look hard and try a lot of different ones to find what works for you. And when you do you’re loyal for life.