There wasn’t much we didn’t do during our recent visit to Levi’s headquarters in San Francisco, but we did miss one very important person: Nick Rendic, the company’s global design director of collections, who was in Turkey with his design team the week we met his colleagues Kaede, Michael, and Jonathan on their turf. Lucky for us, Nick had plans to come to New York the following week, which meant we not only got to meet him, we also got to see his absolute best jeans of all – the ones he doesn’t leave home without.

They’re pre-loved 501s from the 80s that he found at the Rose Bowl flea market in Los Angeles about three years ago. Wide in the leg with an extra-long rise, they are total dad jeans – perfect for Nick, a father of three. Though with his desert shoes and trucker jacket – a sophisticated wool version from Levi’s California, a Japan exclusive created in collaboration with the Tokyo-based retailer Beams – Nick’s dads are definitely not the fashion-clueless kind. In fact, Nick, who heads up design for California and three more of Levi’s most cutting-edge collections – Levi’s Skateboarding, Made & Crafted, and the super-refined Line 8 – is totally clued-in to what cool guys (himself included) want to wear. Whether he’s making rarified clothes specifically for the Japanese market, high-performance gear for professional skaters, or fashion-forward, top-quality jeans for the style-conscious set, Nick gives Levi’s a look that everyone can aspire to live in. “It’s really just about pushing it a little bit,” he says of the special capsules he creates. “Showing the world what Levi’s can do.”

We sat down with Nick between his two New York must-do’s – attending the Kingpins denim show and eating tacos from La Esquina – to talk about his love of denim, which can be heartbreaking at times (like when your sister-in-law accidentally shrinks your all-time favorite pair after you’ve just been wearing them during an awesome week riding horses on your family’s cattle ranch in Chile; she was forgiven, but the jeans will not be forgotten). Nick, who calls what he does for Levi’s “a total dream,” is nothing if not sentimental when it comes to his favorite pairs. Just read our interview all the way through to the end, and you’ll see…

Do you remember when your interest in clothes began? Did you always know you wanted to be a designer?

If you ask my mom, she’ll tell you I’ve been doing dirty tapers to my pants since I was five. I’m the youngest of three, and so I would get the hand-me-downs. Eventually I started asking my mom to help me make alterations to them – open the seams, sewin pieces of fabric, customize. My mom laughs about it now. She says she should have known that I was going to be a designer, because I was always fooling around with my clothes as a kid.

Can you identify what it is that you love the most about working with denim?

I love that it’s everybody’s thing – you can be a biker or a Fifth Avenue fashion person and wear jeans. It’s an equalizer. It’s not precious. It’s this egalitarian fabric. And once it becomes this – these jeans – it’s like, Wow. I love how different the same fabric can be. With denim, there are so many looks. As a designer, my curiosity and appetite for it is insatiable. The minute I think I’m getting the hang of it, I meet someone who knows more than I do, and I realize I actually know so little.

So, you love denim. But why Levi’s, specifically?

From day one, Levi’s has been about giving people the best possible product (for miners, originally) but the same is true today for anyone we’re making clothes for. Now, I make jeans for skateboarders. So I’m going to make the best possible jeans for them. I’m so lucky – I get to play around with performance stuff! In the skateboarding line we use Cordura, which is a durable fabric like Nylon, and T400 Lycra, which just stretches like crazy. The underside of the Cordura is super soft and smooth because of the nylon in it. And the T400 Lycra is coiled so it never loses its ability to recover. But still, it doesn’t look weird or synthetic-y, or tech-y – it just looks like classic, red-cast Levi’s denim.

What’s so cool about working at Levi’s is that on one breadth I can talk about putting synthetic fibers in fabric, and in the next I can talk about beautiful, 100% cotton Italian selvedge – and I get to work with both.

Why use all of that tech fabric is the skate line?

Skaters need their jeans to be superstrong and stretchy – to bend and move a lot. I traveled all over the world and spoke to skateboarders about what they’re into, and they all said the same thing: they need their jeans to be comfortable and strong. And they all loved Levi’s, so we kept the DNA of the brand, but made the jeans better for them. Again, it isn’t about changing what Levi’s is about, it’s about giving people the best product to wear for what they do. And personally, I love those jeans, as much as I love my 501s. I have a pair in rotation that I wear all the time.

How many pairs do you have in rotation?

Probably about five. But I own probably 25.

We noticed the crotch has been mended pretty significantly on the ones you’re wearing. Do you have to do that to all of your jeans?

What do you do that blows the crotch out like that?

Skateboarding. And I do everything in my jeans – I work around the yard, I build stuff. My family and I bought an old house, and I’ve been fixing it up. I like to build furniture, too, and I’m always getting hung up on the wood. Bike riding… 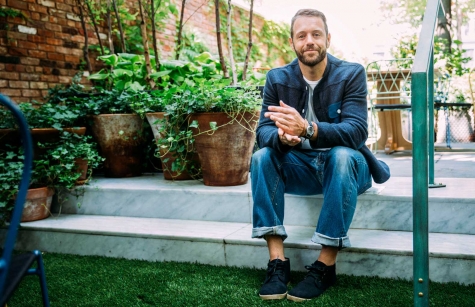 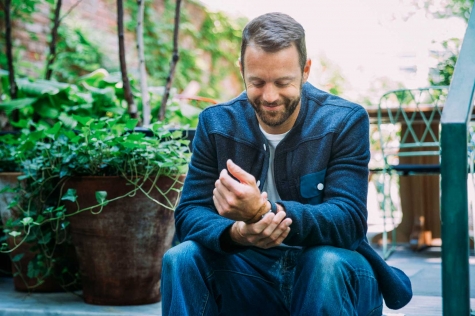 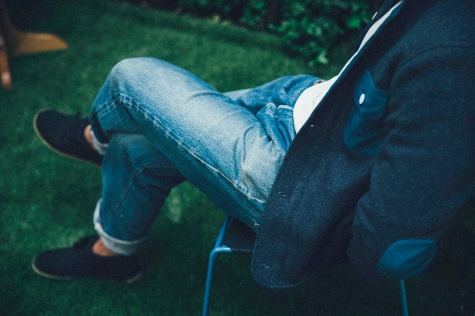 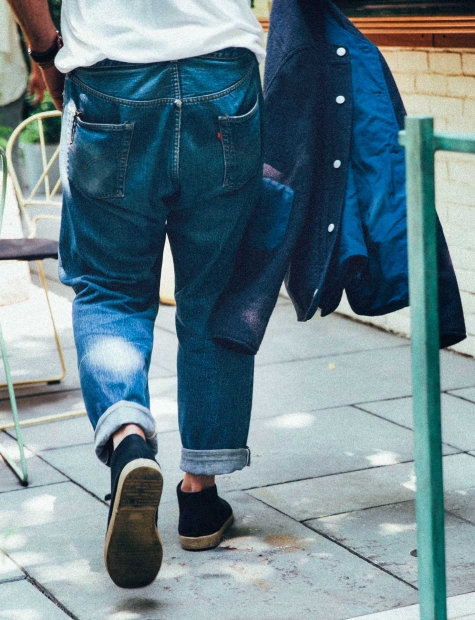 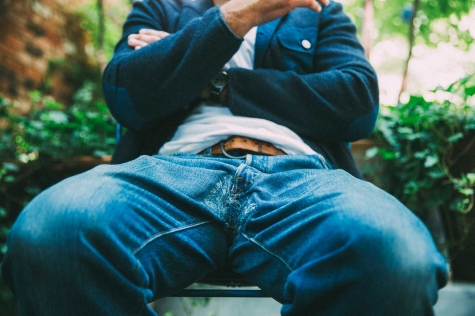 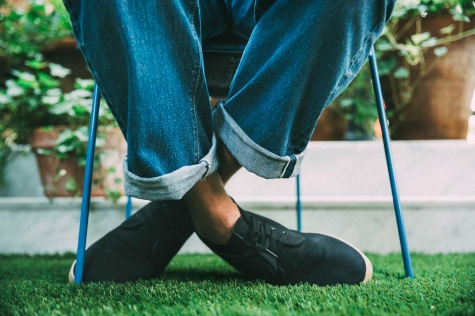 Do you remember your first pair of Levi’s?

They weren’t my first, but I remember having a pair of white 501 button flys. They were hand-me-downs from my brother, and I wore them every single day. With a turquoise tank top. It was so Miami. So embarrassing. I remember wearing those jeans to Daytona Beach for bike week. My friend’s dad would take a bunch of us surf rats every year when I was in junior high and high school. We would go surfing and go skateboarding and hang out and check out motorcycles. Just walk around in awe of the bikers – of these guys and their jeans – they all wore Levi’s. I loved it. I thought they were just the coolest guys.

And the jeans you’re wearing today? Tell us about those.

I got these at the Rose Bowl flea market maybe three years ago, and they were probably $40. They’re a 501 from the 80s, and so they have a long rise and they’re super over-sized. The fit from that decade is bigger in the knee and thigh. I love them because they’re short, so they must have been some big dude’s pants. I just love how long the rise is. And the white selvedge is my other thing. I just think it’s beautiful.

If you could describe them in one word, what would it be?

If your jeans could talk what would they say about you?

They would probably be mad at me [laughs]. I treat them pretty rough.

But you care for them, too – you mend them.

Yeah, but I think they’d still be mad at me.

I don’t know, they’ve been everywhere with me. Probably in this interview – on this shoot [laughs]. I went on a guys’ trip to Argentina recently, a fishing trip, and these went there with me. Hanging out with my father, my brother, my brother-in-law and my father-in-law. We caught fish, we went duck hunting, hiking, we drank a lot of wine. Near Córdoba in Argentina, northwest of Buenos Aires. It was great.

Who besides you has worn them?

My wife. She wears them rolled and belted. And the big guy with short legs, who owned them before me.

What song best captures the way you feel about your jeans?

If you could take your Levi’s anywhere in the world tomorrow, where would it be?

Better to ride a roller coaster or a wave in them? 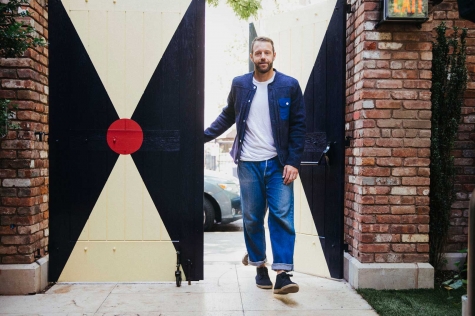 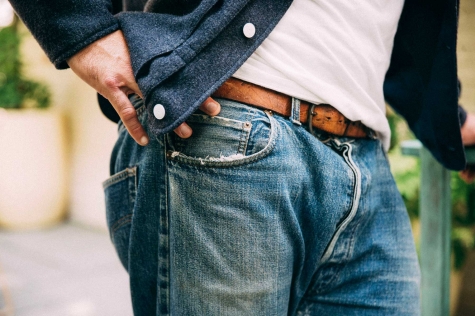 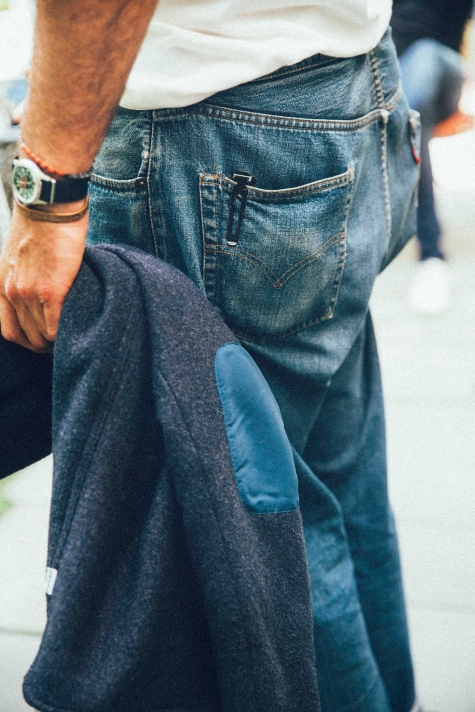 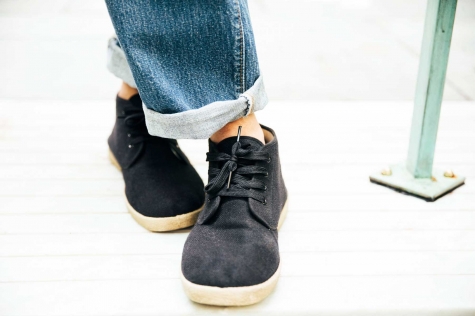 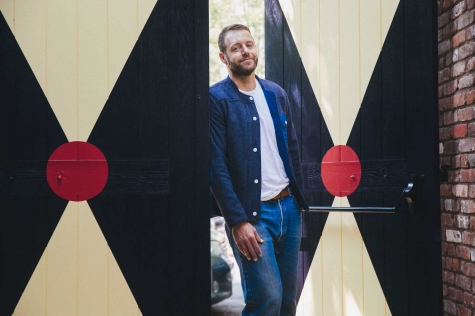 Did you ever have a pair that got away.

Yes. I had a pair of 501 ‘47s and I was working down in Chile at my family’s ranch – we’d been on the horses for a week straight, moving the cattle – and my jeans were so dirty they could literally stand in the corner – I could prop them up. My sister-in-law, being super sweet and doing laundry, grabbed them and washed them for me…and that was it. They shrunk, and I couldn’t wear them anymore. I forgave her, of course, but I miss those jeans.

Probably the ones that I do dirty tapers to. [During our interview Nick showed us a second pair of 501s that he’d hastily narrowed along the inseam. Though messy and definitely not master tailor-approved, the job looked totally cool in a devil-may-care kind of way.] I like how it looks [so do we!], but everyone at Levi’s is like, Dude, really, you work at Levi’s and you do that to your jeans?

What are your Top Three jeans of all time?

We noticed you have a bandana in your back pocket. Do you always?

On what occasions will only a pair of jeans do?

Jeans will do on all occasions. Except surfing.

If you had to replace all of your jeans with something, what would it be?

I could wear a 3-piece suit every day. Totally. Straight off of Saville Row in London. I would get summer weight ones and winter weight ones – I’d get enough of them made so that I could wear one every single day. I’d totally do that.

What’s the best thing you cold imagine doing in your Levi’s?

Giving them to my son.

How Michael Giordano Lives in Levi’s