“All girls love jeans that make them look great and all girls love jewels,” says Lela Tillem-Becker of Mother denim, who, alongside the line’s designer Tim Kaeding, is now teaming up with Los Angeles jeweler Jacquie Aiche on a capsule of cool, made-to-order denim shirts. Available today, the button-downs come in two styles: Mother favorites, All My Ex’s and Double Foxy – with motifs from Jacquie’s bad-gal-glam collection patched in leather on the fronts and backs ($1,165-$1,695). The combination of Mother’s soft fabric and sharp wit (have you ever noticed that the top button on their jeans reads “Mother Always Liked You Best”?) and Jacquie’s rebel-bling vibe is perfect. “It was spontaneous,” Jacquie says of the collaboration. “We were just all together in Paris one evening when the idea of putting my joyous and protective symbols on Mother shirts came up…and so it began.”

Although, to be real, it really began fifteen years ago when Jacquie and Lela found themselves living in the same Hollywood apartment complex. “We’d met through the fashion industry and became neighbors unexpectedly,” Jacquie recalls. Aha, we thought, remembering all of the Jacquie Aiche jewelry Lela wore when we photographed her and Tim at Mother headquarters last year. “We connected immediately and have been close ever since,” says Lela. “I think Jacquie made me one of her first pieces of jewelry back then – it was a gold body chain with an evil-eye charm. I still have it.”

Keepers are what we call friends like these, jeans like Mother’s, jewelry like Jacquie’s…and now the shirts they’ve made together. We’ve heard Rihanna has her own custom Jacquie Aiche x Mother Sweet Leaf already, and it’s smokin’. 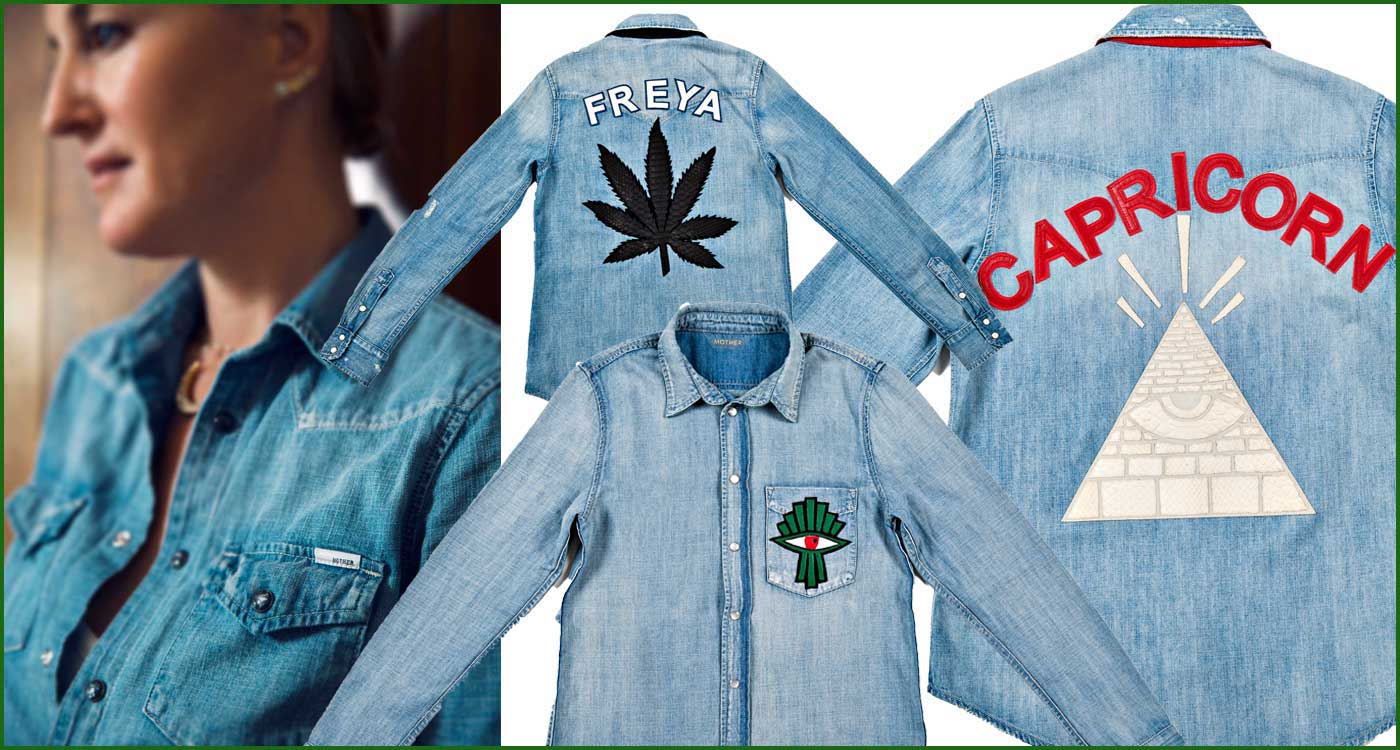 DENIM AND DIAMONDS Left: Mother’s Lela Tillem-Becker in her own All My Ex’s shirt and Jacquie Aiche necklaces. Right: Jacquie Aiche x Mother shirts, from $1,165. Shop the look below. Photograph of Lela by Austin Hargrave

Related: Oh Mother, What Aren’t Thou?