Jane Pratt, the current editor of xoJane.com and founding editor of Sassy and Jane magazines, has got to have good stories, I said to Florence during one of our weekly brainstorms. After all, Jane’s been running hot-topic, fashion publications for young, information-hungry American women since 1988, when she started Sassy at the age of 24. If you’re that age and an arbiter of teen style during the years that followed – when promotional materials for a new show called ‘90210’ featured the cast in matching Mom jeans, a movie called ‘Dazed and Confused’ (1993) glamorized 70s-era flares and the free-spirit attitude that looked best with them, and Calvin Klein used Kate Moss and a gang of models in denim and not much else to make a unisex fragrance called CK One feel irresistibly sexy – chances are you didn’t just talk about denim, you also wore it a lot.

Sure enough, this is the picture that ran with Jane’s editors letter in the inaugural issue of Sassy. Isn’t it the coolest: 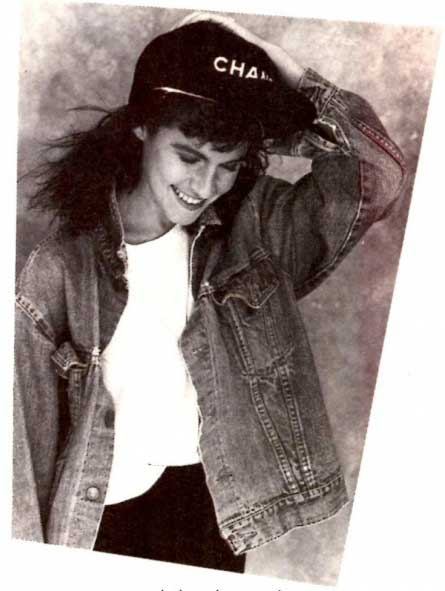 “It’s not like I had a stylist at the time, so that was my jacket,” Jane told me when I met her at her home in Tribeca. Although she had a hard time remembering who made it, she suspected it’s Guess. “Back then I had a real love for Guess. They were always a huge supporter of Sassy. Like, when the moral majority started a boycott of Sassy because we were running stories about birth control and we lost almost all of our advertising, [Guess’s] Paul Marciano called me, and he was like, ‘I want to put in extra ad pages. I love that you’re doing this.'” ‘This’ being educating women about what’s available to them. ‘This’ was exactly why I read Sassy and later Jane when I was a teenager – because they said what no one else at the time had the guts to.

A lot has changed since then. Almost nothing is shocking, especially on the internet, where Jane’s current tell-it-like-it-is outlet xoJane.com lives. And Jane prefers ladylike Le High Straights by Frame to beat-up trucker jackets. Coincidentally, her favorite jeans are one of my favorites, too, which, having been a longtime fangirl of hers, was exciting to me. I’d say we’re really similar – same name, same favorite jean, and we even went to the same college for a time – but then she tells me that she would jump out of a plane in her jeans tomorrow if she could, and I am like, Nope, she’s just as I suspected: completely one of a kind.

How long have you had the Frames you’re wearing?

This pair is actually new, but I have another pair – same exact cut and everything – that I wore to death. They’re the same style, but a different size. I like having two sizes, depending…

Exactly. They just feel…almost like I’m naked from the waist down [laughs]. They’re just so comfortable. They have just the right amount of stretch. Not much, just a little bit. And they bounce back really well. They really hold their shape.

If you were going to describe your jeans for me in one word, what would it be?

Well, I haven’t prepped for this, so I’ll do it off the cuff. We’ll see how it goes. Okay, one word? I want to give them a few words, but I guess I would say ‘cozy.’

That’s a good word for jeans. What do you need the jeans you wear to be, always?

You know what? I need them to be easy. This one doesn’t just have to be one word?

If you could take your Frame jeans anywhere in the world with you tomorrow, where would you go?

Tomorrow? Oh wow. I’d have a big day. I would take them skydiving, for one thing. I want to do that again. I haven’t done that in a long time.

When did you do that?

I did it for an athletic guinea pig column in Jane, actually. I always wanted to do it again, but I felt like when I became a mom, like maybe I shouldn’t do that kind of thing anymore.

Can you skydive in jeans or do you have to wear a jumpsuit, like parachute clothes?

Well, you know what? Good point. I would probably have to wear a suit. Then, after skydiving, I’d want to go to a place I’ve never been. Like, I wouldn’t even want to know what the place is. I would just want someone to put me on a plane…some place where I don’t speak the language. Like Singapore, I don’t think I’ve ever been there.

If the jeans were to have a theme song, what would it be?

Let’s see. What’s coming to me is a Rolling Stones song, or something. Classic rock. Like ‘Brown Sugar.’ I’m free-associating here now [laughs]. You know what? I love hip-hop, I love a lot of different kinds of music, but there’s something about jeans. You just want them to feel like an old, great, classic Rolling Stones song. Because you’ll never not like that. It will stand the test of time. It will never get old. Right?

Totally. If your jeans had a zodiac sign, what would it be?

Well, I have to say Scorpio. I’m a Scorpio, and I just feel like they’re one in the same with me. 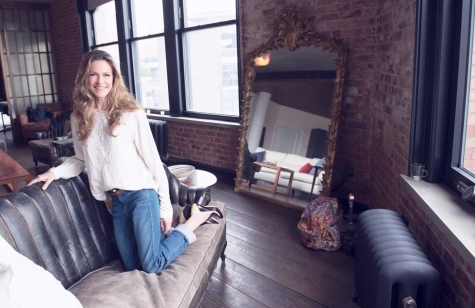 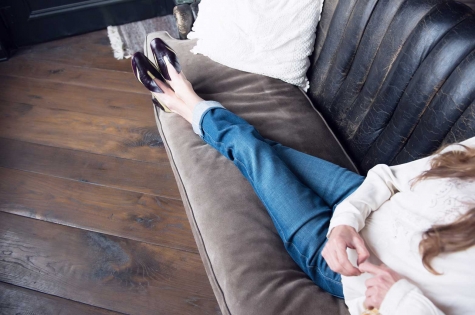 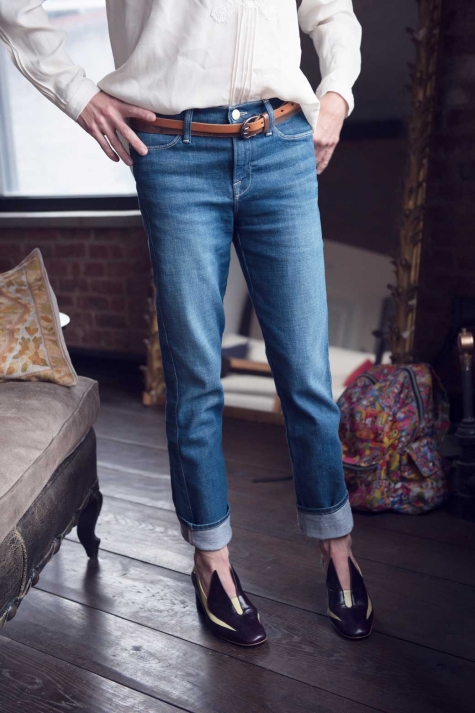 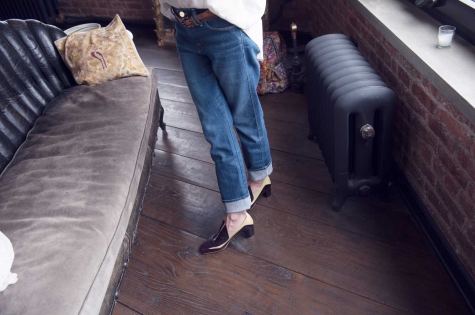 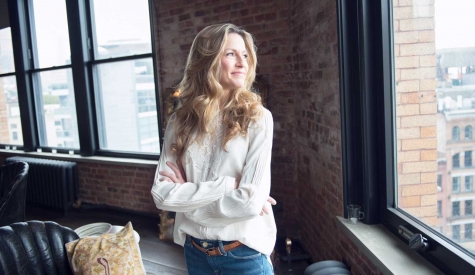 Let’s talk a little about your life in jeans. As an editor, you’ve seen a lot of trends come and go.

Oh my god, that’s true! Let me think, there’s so much to talk about…I remember back in the Sassy magazine days Christina Kelly, who was one of my main writers there, and I went to Daytona Beach for spring break. We went there to do a story about all the disgusting stuff that really goes on during spring break. At that time, Daytona Beach was the place that everybody went. My main recollection from that trip were all these guys wearing acid-washed, pleated denim pants. I remember saying to Christina, “You know, acid-wash jeans are so bad, but it’s even worse when guys wear acid-wash because there’s just so much of it.”

I know that look. It really came and went, and hasn’t come back, actually.

What year was that? Do you remember?

What did you end up discovering on that trip, besides the jeans?

What we wanted to do – which is what I always want to do – was tell the truth about things that are often glamorized. So we wrote about all the people that were getting really drunk. And the kinds of things that the guys were saying about the girls that the girls didn’t hear them saying…that kind of thing. Just the ugly truth about spring break.

Do you remember the first pair of jeans you ever loved?

OK, this is good for me to try to remember. Let’s see. The first jeans I bought for myself were Levi’s 501s. I remember saving up all my money to buy them. $14. Something like that.

That doesn’t sound like something you want to wear on your body.

No. Right? It’s true. But it was the Sears house brand. That’s what I wore because that’s what my mom put me in. Then, when I could buy my own jeans, the three that people wore back then were Levi’s, Lee, and Wrangler. I feel like, throughout my life I’ve gone back to those three jeans and gotten kind of excited about them again. There was a phase at Sassy – this was, like, 1994 – when I got really into finding vintage Levi’s from an era similar to that of my first pair. I wish I still had them to show you.

One thing I like about Levi’s, by the way – and these Frames, too – is that they’re not logo-ish. I don’t like for people to be able to tell what I’m wearing.

Although, I went through a phase, I can’t even believe it, where I was going to major shows in Paris and Milan wearing bedazzled corduroys. From Fred Segal. I loved them at the time. And I bought them bedazzled. That’s the worst part – I paid $300 for these bedazzled pants! Full disclosure.

I know all about those bedazzled jeans and corduroys…

Oh yes, that’s your Dad’s store! I knew that! I read that! Well, the embarrassing part to me is that I was wearing them to shows like Chanel in Paris. Why did I think that was the thing to wear?

Was anyone else wearing a similar look?

No. Definitely not! They were wearing Chanel. Yeah, I went whole hog with that trend. 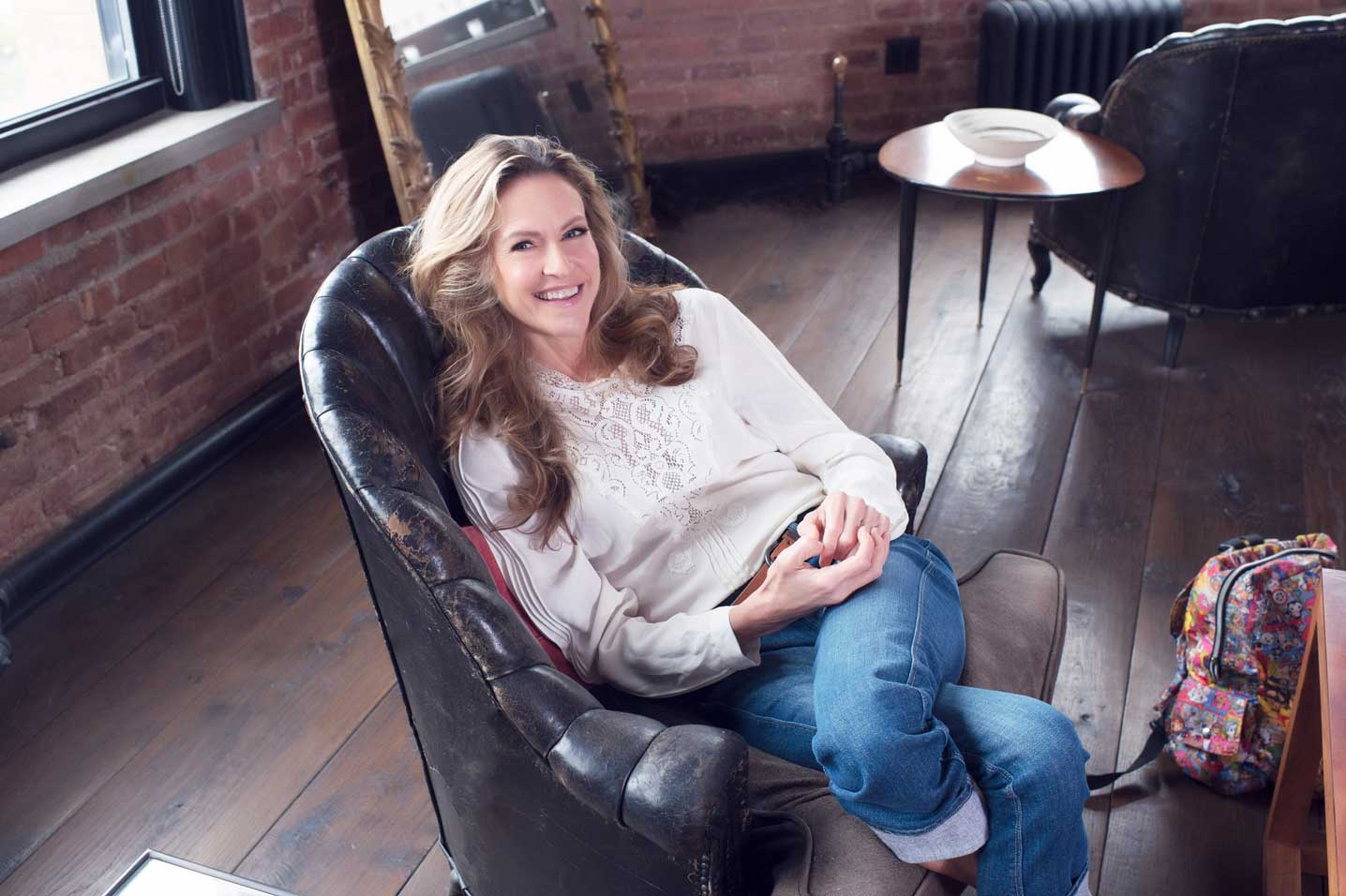 I’m sure our readers and xoJane fans would love to know if you have any other favorites right now.

Oh, well, these Citizens of Humanity coated jeans that look almost like leather. They fit so well, and they go back to their shape really beautifully. They kind of bunch a little bit at the bottom, depending on the shoe.

I’d love to see them. Do you have them here?

I don’t have them here because they’re at my old apartment and I’m moving everything, piece by piece and outfit by outfit, from that apartment to this one. I’m like, what do I want to wear tomorrow? Okay, I’ll go pick that up. My daughter does the same thing.

Actually, a lot of my jeans are hand-me-downs from a friend in L.A.

What a nice friend.

Yeah. It’s kind of amazing. She’s one of my best friends. Unlike me, she really has a very organized closet, and she cleans it out all the time. We happen to be the same size. But we don’t have the same exact style, so it works. Having a friend that’s like that is such a great thing. She’s so organized! And she doesn’t care that I’m not that way, and I love that she’s that way.

So what are the other ones I’ve gotten from her? J Brand, Paige…too many to name. 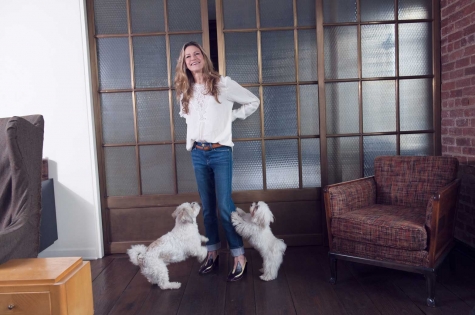 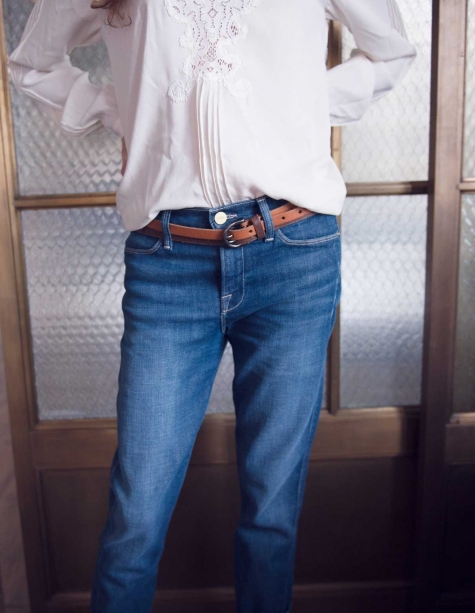