We caught wind of jewelry designer Pamela Love’s beloved J Brand jeans through a third party – someone who’d seen them firsthand, and insisted we go do the same ASAP. Oh, the things we learned that afternoon in Pamela’s studio, most of which had equally as much to do with jeans as the other important things in life, such as the Grateful Dead. And Girl Scout Cookies – which Pamela’s stylish press officer, Allison Sparkuhl, had set out kindly…and later revealed weren’t real Girl Scout cookies, but the Duane Reade knock-offs (Duane Reade makes knock-offs!) that look and taste almost exactly the same. (The fake Samoas might not be as chewy, we all agreed.) Turns out Pamela doesn’t like Thin Mints. “It’s like I’m eating toothpaste,” she told us. See, we learned these kinds of important things.

But back to the J Brands. The truth is that Pamela, like most designers, is extremely thoughtful about how she wears her jeans (above the ankle, so that she can always see her socks), and with what (a mess of necklaces and rings on many fingers). Her jewelry – refined punk princess-meets-soulful-hippie-mistress – is a perfect reflection of her Jean Story, and vice versa.

When we mentioned the word “flair” to Pamela in connection to the pin-heavy jean jacket she designed for J. Crew when she was a runner up in the 2011 CFDA/Vogue Fashion Fund, she yelped, “Don’t call it that!” But take note: We love the word “flair” at Jean Stories, and after a really good heart-to-heart, we’re happy to report that now Pamela does, too.

We’re here to talk about a very special pair of jeans: your J Brands. Tell us when you got them.

I bought them in 2006, right about when J Brand first came out. I had just been hired at Barneys to be the women’s designer trunk show coordinator – I know, such a long title – and the first thing I did when I got the job was I went and bought these jeans. It was a huge purchase. They were $200, and that was like my entire savings. I wasn’t allowed to wear jeans to work – you’re not allowed to wear jeans on the women’s designer floor at Barneys – but I just wanted them. They were so skinny and perfect and tight, and I’ve now stretched them out to hell because I wear them constantly.

How long did you wear them before you started putting holes in them?

Maybe five years. And once they got one hole, then they really started to go. I’ve repaired the holes five or six times. I even took them to a professional place that does denim repair, but they sort of laughed at me because my jeans were so far gone. They had no way to deal with it. It was going to cost, like, $200! My assistant is a really good seamstress, and so she did some repairs on them for me. And I’ve done some repairs on them myself. And my husband Matthew made me this Grateful Dead patch because I love the Grateful Dead, and so does he. It’s a Steal Your Face skull in army green, which I think is really funny because it kind of looks like a punk patch – like those patches that all the punks sew on to their jackets, for bands like Crass or The Casualities – but mine is for the Grateful Dead. So it’s more of a peaceful patch.

We didn’t know you’re a Dead fan. Have you always listened to them?

Since elementary school. I think it started because my older cousin, whom I thought was so cool, was into them. My mom was into the Dead, too. (My dad was more in disco; he loved the Saturday Night Fever soundtrack, that was his favorite thing.) There was a classic rock station in my hometown, in Broward County, FL, and it had a Grateful Dead hour every Sunday at midnight, and I used to stay up with my cassette tape recorder and record it. They played rare recordings that you couldn’t normally find.

Do you have a favorite Dead album?

No. Not right now.

Do you have a favorite song?

Did you ever see the Dead play live?

No. Jerry [Garcia] died when I was at summer camp as a little kid and I remember being devastated. Camp was super hippie-dippie. I don’t know if it’s still this way, but Jewish summer camp in Georgia the early 90s was all about the Dead [laughs].

It was a sleepaway camp in the mountains in Georgia, and I would go for eight weeks and just make out with boys and listen to the Dead. There were color wars and camping and all kinds of outdoor activities, but I was really into arts and crafts. So, I just stayed in the arts and crafts hut. And I got really into reading tarot cards. All of the girls would come to my bunk and I would read their cards. I was just really into being one of the bad kids who would smoke cigarettes and not do activities [laughs]. I wore jeans then, too, of course. That was my bell bottom phase. It was the early 90s.

I guess I was kind of a hippie, am still a hippie. My husband and I are both hippie-punks. We’ve both travelled in hippie circles and punk circles at certain points. And somehow we found each other.

How did you two meet?

Actually, with the help of the Grateful Dead! My husband was in a band, and I went to go see his band play wearing a Grateful Dead t-shirt. A bunch of people were hanging out after, and he asked me if I really liked the Dead, or if I was just wearing the t-shirt because it was cool. We started talking, and he told me that he’d just gone home to his parents place in North Carolina where found this old ring he had – a silver ring with the Dead’s psychedelic dancing bears going all around it. He pulled it out of his pocket and gave it to me right there. He actually gave me a ring the first time we ever met, which I think is kind of symbolic. We ended up talking about the Dead all night. And then we became pen pals, and I sent him a pair of Grateful Dead socks at one point. That was our first thing. The Dead. And so, at our wedding I walked down the aisle to “Sugar Magnolia.” And Neil Young’s “Heart of Gold” [smiles big].

OK, yeah. So, one leg has a lot of rips in the knee and in the back of the calf and the other leg doesn’t. I don’t know what that’s about. I don’t think it’s because I cross my legs in one way or the other. I’m thinking maybe one of my knees is sharper than the other? Is that possible? I don’t know. But the right leg has a manageable amount of holes and the left leg looks like I put it through a blender. I am telling you that one of my knees has to be sharper than the other! 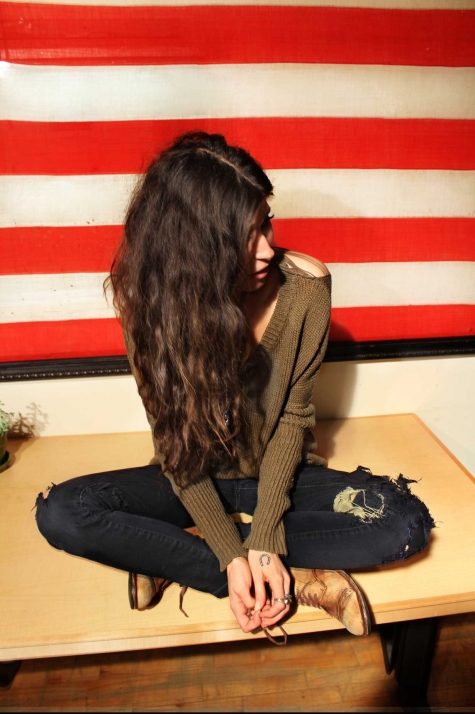 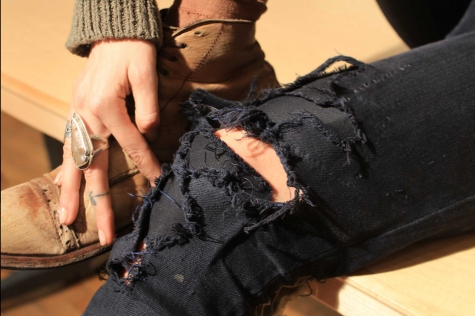 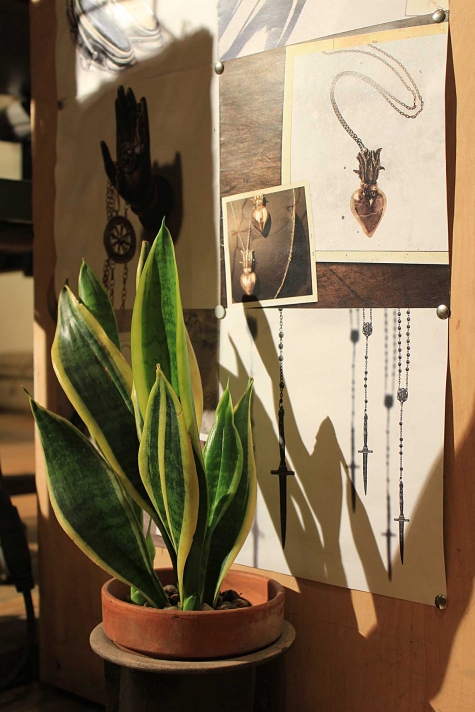 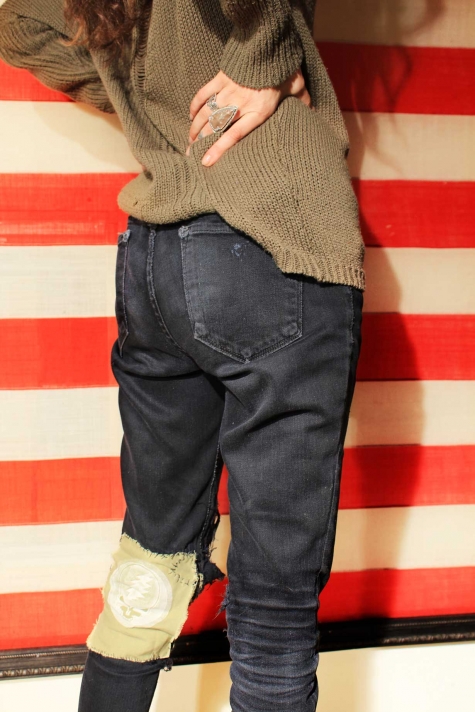 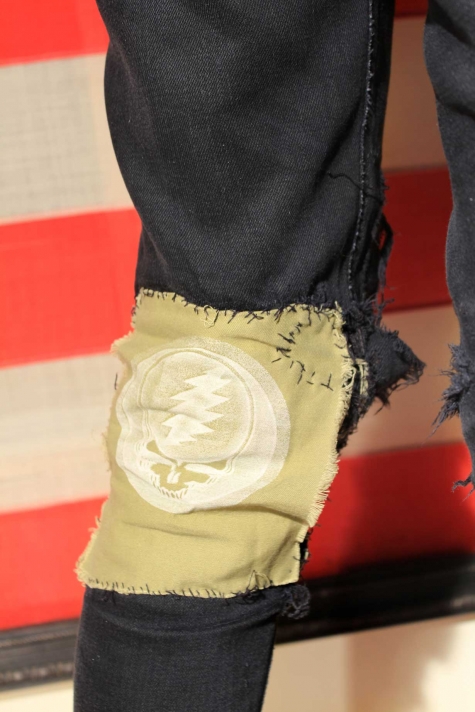 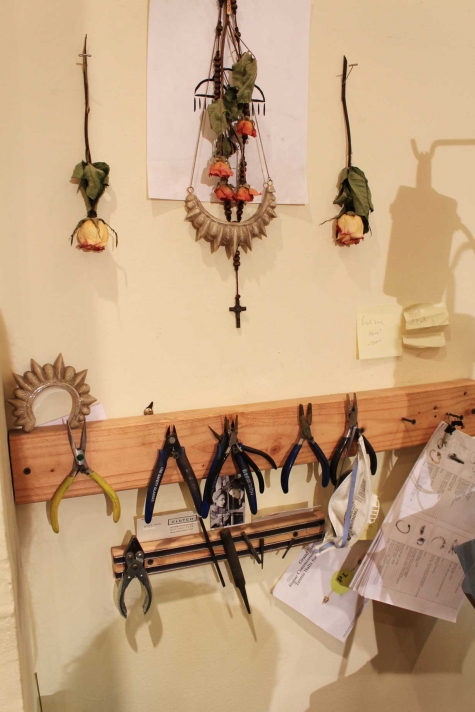 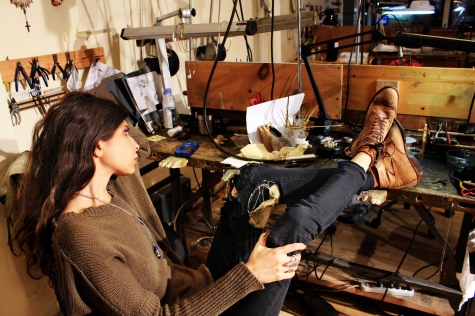 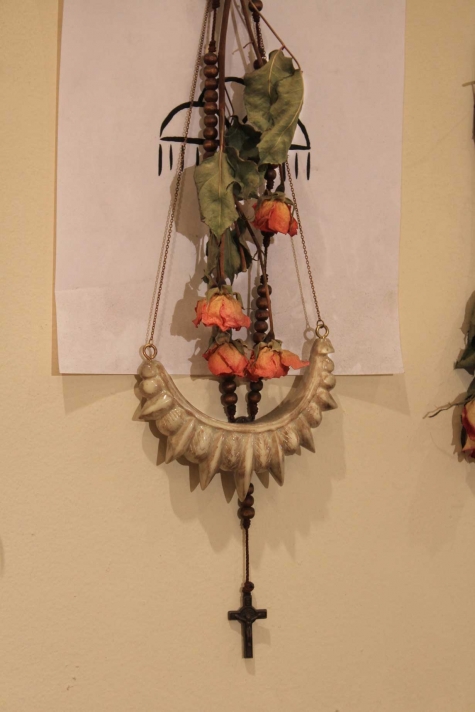 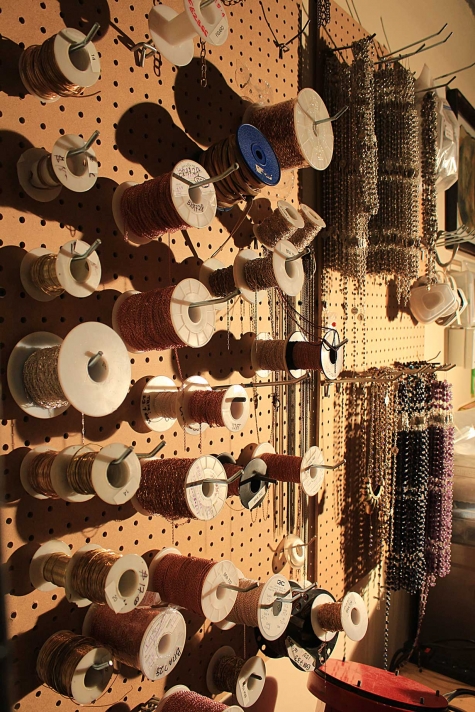 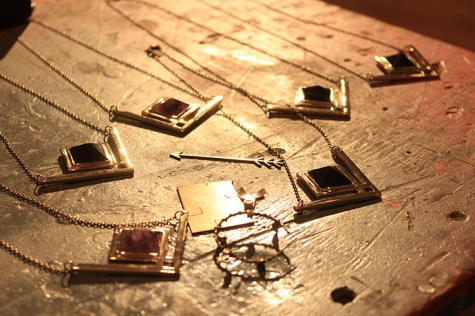 Can you draw any connections between your jewelry and the jeans that you wear?

There’s definitely a vibe for which I wear certain jewelry. Like, there’s the jewelry that I think makes sense with jeans and t-shirts and a denim jacket, and then I have other jewelry that I wear with skirts and dresses.

Break it down for us.

When I wear denim, I’m really into long layering necklaces – lots of tangled necklaces in a mess, with a bunch of bracelets all on one wrist, and a ton of rings. And then when I’m wearing a dress I always like to keep it cleaner: one statement necklace and maybe a strong cuff. If I’m wearing a nice dress I try to keep the jewelry really minimal, and if I’m wearing denim I really like to let the jewelry go crazy. I don’t know why I compartmentalize it that way…

Any other inexplicable denim dos?

I have a rule where all of my jeans have to be short at the ankles because I like to see my socks. I have a weird nerdy obsession where I need to be sure that my socks are showing at all times [laughs].

Is there another jean that you really like to wear right now?

I like Rebecca Minkoff’s new jeans. I just ordered the same pair in two different sizes – this is what a freak I am – but I wanted them in a super, super-tight size, and in a bigger size, too. The same pair of jeans in a my size, and then in two or three sizes bigger. For me, it’s not about having the same jean in a lot of colors. If I like a jean I want to have it fit me multiple ways, instead.

That’s another thing: I have a very different feeling when I’m wearing blue jeans vs. black. I like my blue jeans to be baggier and my black jeans to be skinny. These black J Brands are baggy on me now, but they didn’t used to be. I’m just too scared to run them through the wash to shrink them up again. I’m afraid they might really fall apart. I washed them recently and they got super tight, but then I put them on and I popped all of the holes out. I’m going to have retire them soon. Or else – oh, no – have them dry cleaned.