Dorian Grinspan leads a double life – but it’s no secret. Three days a week, he’s in New Haven, CT getting his degree in American Studies at Yale. The rest of the week, he’s in New York City, doing everything one does when you run a very cool – and very legit – indie magazine. Dorian (who hails from Paris) founded Out of Order about three years ago, and everyone from Woody Allen, to Arizona Muse, to Larry Clark has been featured in it. The third issue launches next week, and, though we’ve been asked not to disclose anything about it, you can rest assured it will be major.

Despite these two existences, Dorian’s look remains the same no matter where he goes: A.P.C jeans and a t-shirt (usually white, sometimes gray), and Dries Van Noten shoes. It suits this wunderkind’s friendly, completely unpretentious manner (it’s so refreshing to learn that the 21-year-old boy with a top-floor loft on Gramercy Park, who may or may not Instagram shots from private planes, slept on a bunk bed in the Yale dorms for two years). And it looks so good on him.

What jeans are you wearing today?

A.P.C. Petit Standard. I’ve had these for a year or so. I change them every year. I get the same pair over and over again. They have that thing where you take it in and give you a new pair for, like, half off.

Right, their “Butler” program. So you buy one pair a year and wear it all the time?

Pretty much. I was really into Rick Owens jeans before. And now I wear these a lot. I have, like, a uniform. Jeans and a t-shirt.

Is it always a white shirt?

Yep, I have this one from Barneys. I like the cut. It’s a very specific cut. It’s kind of looser. I used to wear Orlebar Brown a lot.

So when did you switch from Rick to A.P.C.?

About a year ago. I just changed my style a bit to be more simple. I guess that’s when I started with the uniform.

Was that because you’re in school and it’s just easier?

No, I just think it’s a nice base. And then you can build on it. I think it looks better, too.

They’re so simple. I like the color. I always get them tailored so they look a little shorter, a little tighter.

Who tailors them for you?

Usually the tailor on my block in New Haven.

Do you have any A.P.C.s that are more worn in? Can we take a peek?

They look the same. There’s always a hole here [points to crotch] 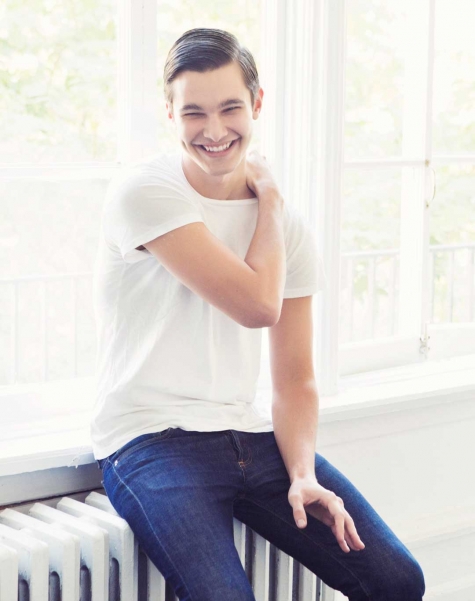 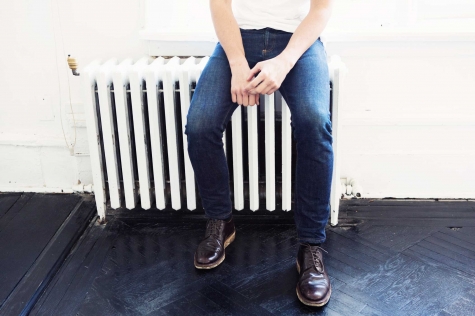 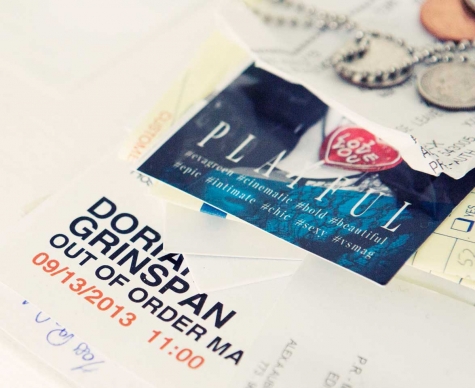 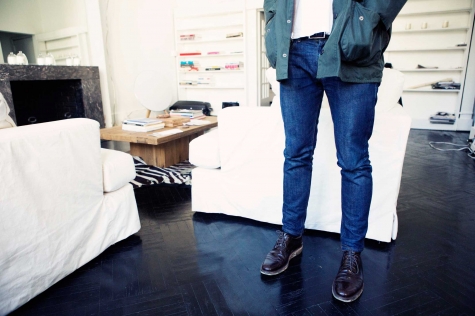 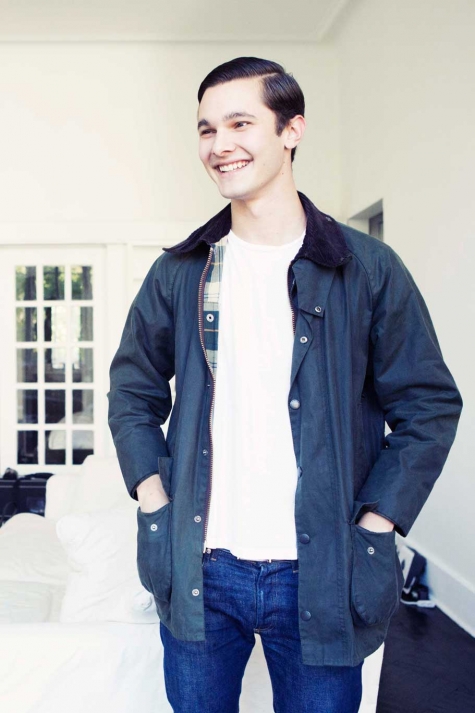 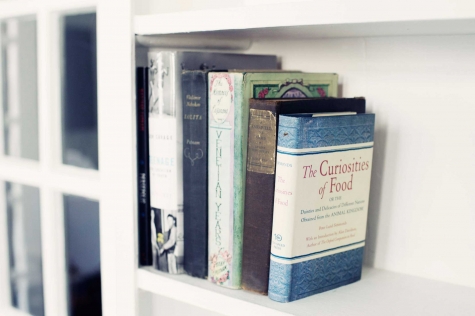 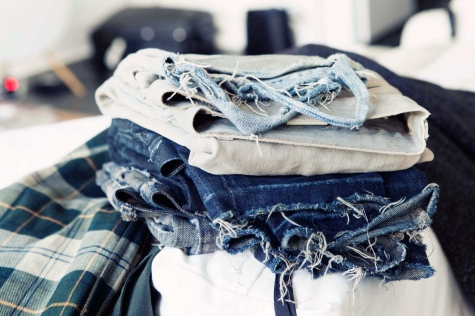 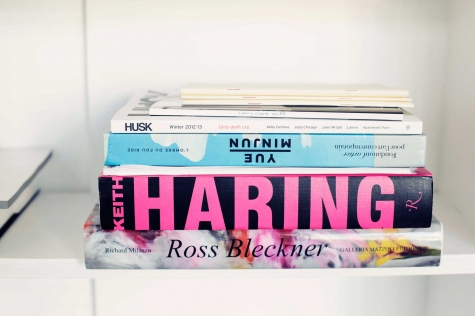 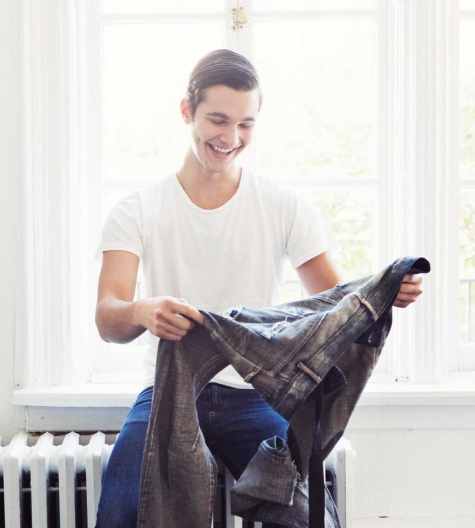 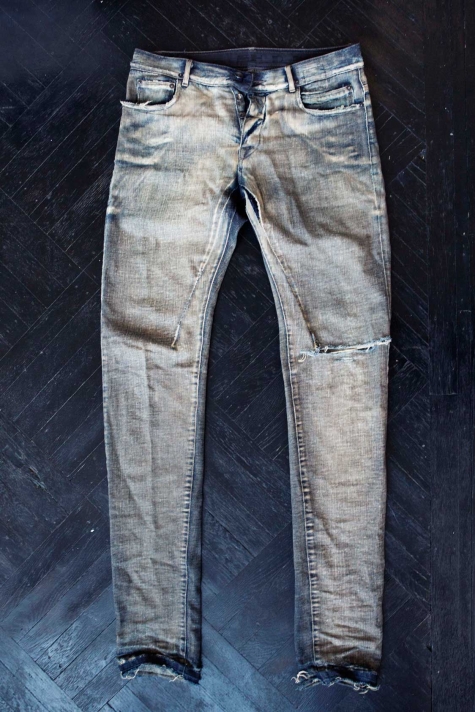 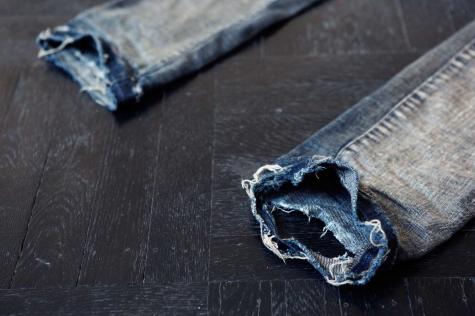 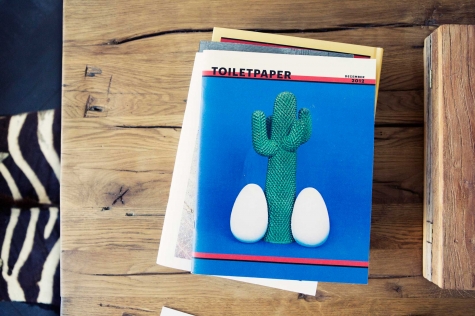 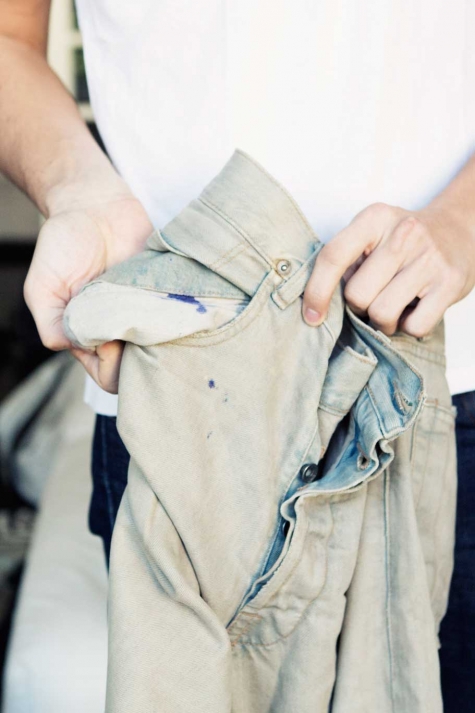 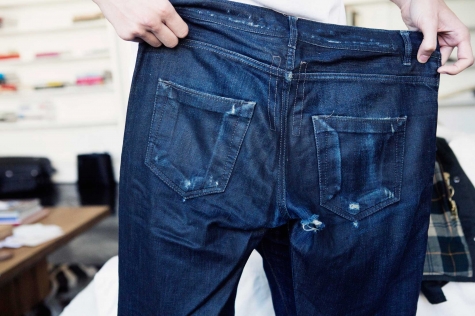 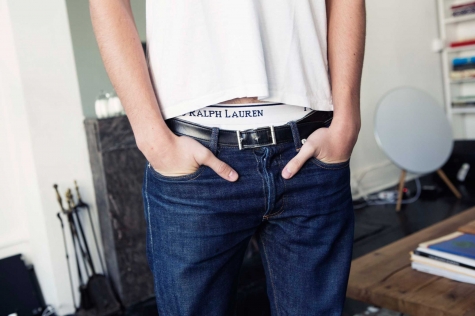 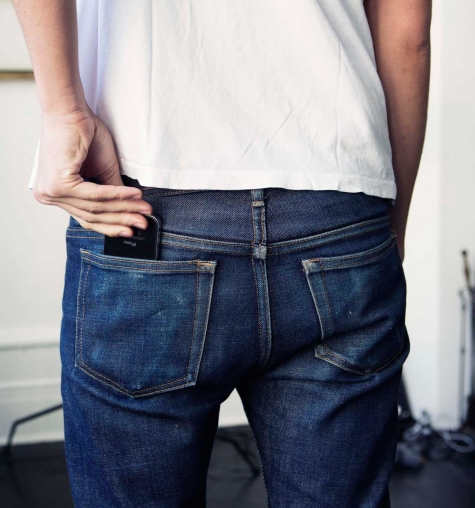 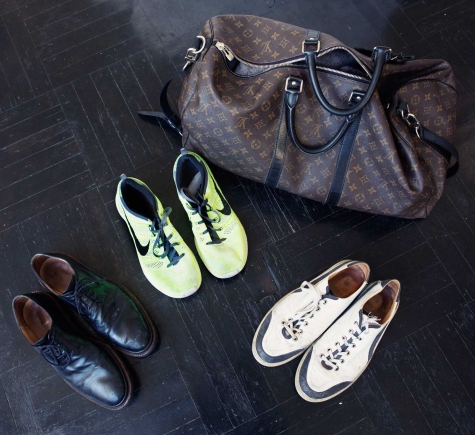 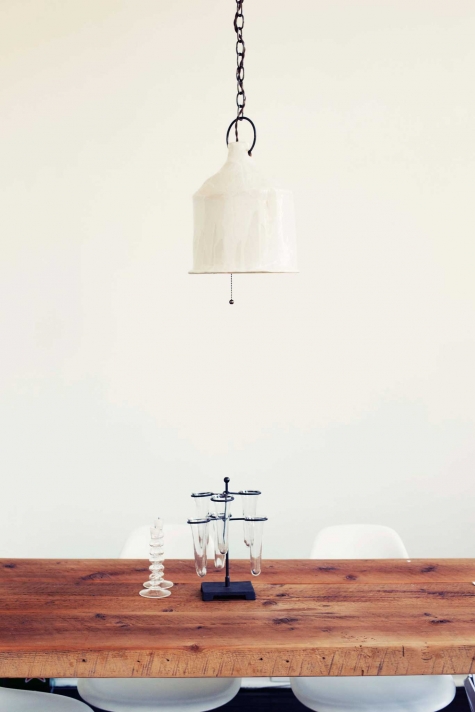 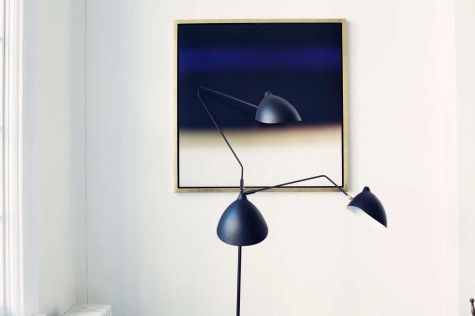 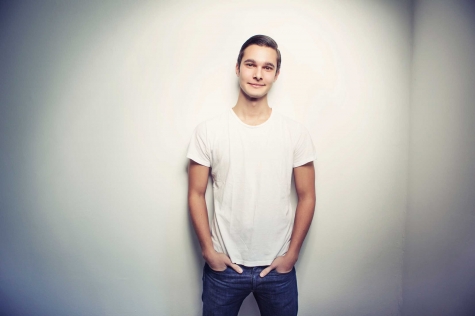 Do you dress differently when you’re at school, as opposed to in New York?

No. I used to, but not anymore. I wear this everywhere. I wear it to [fashion] shows. Sometimes I wear a gray t-shirt. And sometimes I wear a jacket over it. It depends on the weather. That’s the thing I wear at Yale actually, my Barbour jacket. It’s so practical. You’ll see a lot of Barbours at Yale.

You wear it in the city, too?

Yeah. I was going to wear it today. I got it in New York. My ex-boyfriend bought it for me. He was from here. I’ve never really had a boyfriend at Yale [laughs]. I’m here a lot. It’s not easy. Actually, I would like to try it once. But I don’t really know anyone…I have all my friends at Yale, a very close group of friends I’ve had since, like, sophomore year.

Do you ever shop in New Haven?

Yeah, actually I love J. Press. I was in there the other day. I bought like, this really stupid hat. It’s cashmere, or maybe wool. And it’s gray with like the pom-pom thing. It’s white and gray. They are not the Yale colors [laughs]. I can’t rock that; I wish I could.

Do they sell jeans there?

Barbours. All of the kids wear beige khakis with blue jackets. Actually, I was thinking about it the other day. The fashion’s not that bad. It’s very preppy and conservative. But there are also really crazy people. The art school kids.

What kind of jeans are the girls wearing?

Where did you used to wear your Rick Owens?

Everywhere. Basically, I would go through these phases. I would wear the same thing for, like, months, and then change. I was at a party at a club in New Haven called Alchemy, and I was dancing and the entire jean just ripped open. Literally from here to here. That was pretty amazing. I kept on going. Later that night…I just had my ass hanging out [laughs].

Where did you buy them? Paris?

Do you remember that day, going there to buy them?

Yeah, well my parents friend, Barbara, she started the store in Paris. And we used to go quite a bit (my mom dresses a lot in Rick Owens). So I went with her. That was a long time ago. It was before I left for Yale. Maybe right after. That first Thanksgiving my freshman year.

What are those ink stains on the pockets from?

A flowing pen. See I have the same here [points to pocket of jeans he has on]. I put a pen in my pocket and it flows and then it’s all messed up. I always have a pen. You can’t photograph this! [laughs]

What kind of pens do you use?

You know, like, those Bic ones you can buy hundreds of? Because I lose them everywhere.

And do you always use blue ink?

Yes, I don’t like black ink. It’s depressing. [laughs] I hate it, because when you read it over, it makes me depressed. It feels like a computer.

So these days in school, does everyone sit in lecture and take notes by hand? Or do they all have computers?

Everyone has a computer. Well, some people still write them.

What do you do?

Actually, I don’t take notes [laughs]. Because when I take notes, I don’t listen. If I need to, I ask my friends for notes.

What are you studying?

It’s called American Studies. I was doing history before. Now, because of the magazine, it’s just easier for me to do that. My senior thesis project, I can fit the magazine into it somehow. It’s such an amazing major. A lot of fun.

So how do you work the magazine into that?

I haven’t really figured it out yet. I’m trying do something on, like, media. Publishing, I guess. But I haven’t found a subject yet. They just ask for some kind of critical thinking. And a project. I’m hoping I can just turn in a copy of the magazine. I wish I could do that. But apparently, I would have to be the only one writing it. But I could maybe submit it and then write an essay about it.

What part of the magazine industry interests you?

For me it was about the challenge. I found that exciting. It was funny, I didn’t know what PR was. I didn’t know what the back end of a website was. It is fun. It’s fun to go to the meetings and…I’m involved in everything. I used to hate selling ads and now I think it’s really interesting. When I didn’t even have an issue of the magazine yet, and I was 18 years old, I’d go into these offices and be like, Hi, you wanna buy some ads?

What did you wear in those meetings?

I would wear jeans and maybe this Opening Ceremony jacket I have. I thought maybe I would keep it cool [laughs]

I didn’t sell any ads [laughs]. Nothing. Zero. But it’s okay, I’m making up for it now.

Did you have anyone advising you?

I pretty much figured it out on my own. My friend Jorge [Garcia], [the publisher at] V helped me. Actually, we had coffee in New York and he said, Listen, Dorian, I only have ten minutes. I don’t want to waste my time, but you shouldn’t do a magazine [laughs].

No, not at all. He still says it to me today. Why are you doing this? It’s kind of a joke now.

Why do print and not digital?

Good question. It’s just the cool concept of print. And actually in terms of ads it’s better for me.

What’s harder, school or the magazine?

Both, at the same time. The magazine, probably.

Are you excited for school to be over?

So, we guess you’re not going to grad school then?

Maybe. I don’t know what’s going to happen with the magazine, if it fails or if it bombs.

How do you get back and forth between New York and New Haven? Do you take the train?

Yes, it’s actually kind of nice. When you do school and the magazine, the only way I can do it is if when I’m at school I shut out the magazine completely. Because I can’t think about both. It would drive me crazy. And so the train is amazing, because you have two hours to just… I literally never work on the train. I don’t read or anything. I just look out the window and re-boot. So when I get to Yale I’m fresh and I do my work. And then get back on that train. I think about nothing. It’s really important, actually.