A True Story of Embellished Denim

Dear Hillary, I have a tip on a pair of vintage Levi’s with a good story…they are being sent to me, and if they fit I will send them to you and we can get this started. Hope all’s well. xJane

This is an email I sent to Hillary Justin, the designer behind the new Los Angeles-based line of embellished vintage, Bliss and Mischief, on June 9.

The story I mention begins back in May: my friend Erin Barajas and I were catching up over cocktails in Amsterdam, both of us in town for a big denim industry gathering, when she brought up this pair of Levi’s she’d found while shopping at L.A.’s famous flea markets some months ago. They were small, too small for her. But, they had the prettiest, pale-blue wash, so she’d bought them anyway. She should give them to me, she said, they’d fit. I hesitated. Erin insisted. “When I saw you that night, I realized they were rightfully yours,” she told me later, after we’d all returned stateside and she’d sent me the jeans, along with the following email:

501s on their way. I told my other jeans that the 501s were going to live on a big farm in the country, where they could run around with other 501s and play all day. xE

I laughed and emailed Hillary. Before Amsterdam, I had fallen in love with one of the Westernwear-inspired embroidery motifs that she offers at BlissandMischief.com. Called “Song of the West,” it has roses on the knees and a trim that follows both front pockets like little smiles with arrows on each end. Mellower – Hillary’s word – than some of her other patterns that have flowers and cacti chain-stitched wildly from hip to hem, for example, “Song of the West” was easy. Easy for me to love, and easy for Hillary to execute. I was just waiting on the right pair of jeans to come along…

Needless to say, Erin’s jeans never made it to a farm – sorry! The second I had them – a more petite Student edition of the 501 that fit me perfectly, as perfectly as Jessica de Ruiter’s vintage Levi’s fit her (which says a lot) – I sent them directly to L.A. to Hillary to be embroidered. Oh wait, no, I e-mailed Erin to get her okay first. “You absolutely don’t need my permission, but I can only imagine how rad she would make those little guys,” Erin replied. And make them rad she did (click for close-ups): 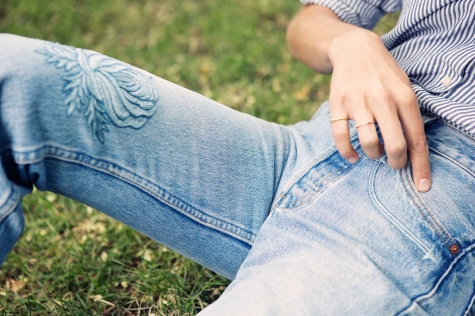 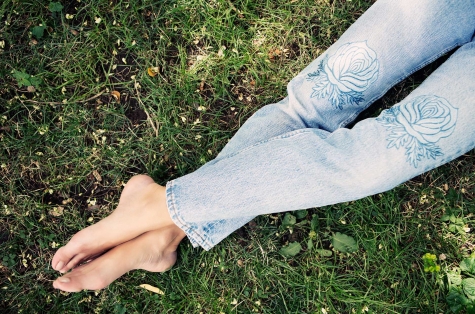 It’s important to mention that one need not go all the way to Amsterdam and back to get her own Bliss and Mischiefs. Hillary has plenty of gorgeous vintage jeans in stock that she’ll make to order with the help of her sewers, a few North Hollywood craftspeople who inherited the skills to do what is, essentially, a remnant of Hollywood’s old-Western heyday and the Gene Autrey-era of dress that put embroideries like these on the fashion map. Mine are the first (and, right now, only) pair that she has truly customized, using thread to match the blues of my jeans, per my request. The result: A “Song of the West” that totally suits me. “They’re really something you can wear more than once a week,” Hillary said. “With yours, it isn’t like, Oh, here she comes in her crazy embroidered jeans again.” Although, now I’d hardly mind if it was.