That picture, you know, the one of model Michaela Bercu wearing an haute couture Christian Lacroix jacket and Guess jeans on Anna Wintour’s first cover for American Vogue (November 1988)? The one shot by Peter Lindberg that caused quite a fuss (denim-plus-couture on a cover?). We have stylist Carlyne Cerf de Dudzeele to thank for that picture – and that kind of look that we now can’t imagine life without. Her pioneering high-low mixes of denim and designer ready-to-wear are now, thankfully, the norm. But they weren’t always. Jeans with Chanel jackets? Carlyne put this never-before-seen pairing in Vogue in the early 90s and made it not just easy to understand, but also easy to achieve by any woman who might already have had such things in her closet (and never, ever thought to wear them together). “Nothing is really new,” Carlyne said about fashion over coffee at Bar Pitti recently. Even though there was a time, when she did it first, when it was quite.

Now the star of her own YouTube series, J’Adore, Carlyne continues to work with and wear jeans on an almost daily basis (if she isn’t in jeans, she’s in Adidas track pants). Whether they’re from Dolce and Gabbana or Gap, Carlyne’s favorites are all loved equally, and she keeps every single pair she’s ever purchased. That afternoon at Bar Pitti she brought a denim Chanel bag, a few Ralph Lauren painted pairs (look up), and a Lee jacket to show us. The jacket she bought at a vintage store in L.A. and once used in an ad campaign for Hermés, she said. For Carlyne, no luxury leather good has ever been too good for Lee…or Levi’s, as the story she told us about a certain shoot with Janet Jackson confirmed. If you’ve ever worn your best-loved blue jeans with your fanciest accoutrements, you’ll want to read Carlyne’s Janet story, and more of her high-low high jinks, here…

Do you remember when your love affair with jeans began?

I’ve worn jeans always, totally as a kid, I was always always in jeans. I grew up Saint-Tropez, in France, so you know, I was raised with jeans and duffel coats and big shoes. I’ve always been a big fan. I spent 10 years at French Elle where I did a lot of pictures with jeans. Because I think jeans are the most classic thing. I collect them – I remember going to do a shoot for Vogue, at this time the Vogue trips were very long, and I remember being at the Ritz Carlton in Laguna Beach for two weeks, and the only thing I wanted to get, and to shoot, and to be in, were jeans. We went to all of the shops that have old, old, old denim. I don’t know, I must have 200 pieces of old denim, old jeans – from when the Levi’s had the big E, and pairs that when you turn them up they have the navy blue stripe. I’m obsessed with jeans.

I once found in L.A. a divine jacket – from Lee – it was perfection. Years ago I shot the first ad campaign for Hermés, and it was a revolution because I put my Lee jean jacket with an Hermés scarf in the ad.

When was that – do you remember what year?

I have no idea. You cannot ask me dates. I have no idea…I don’t want to remember, I can’t. I don’t. I’m blocking everything, it’s my little magic trick.

But it was a decade ago…or longer?

And you know, I was the first one to put jeans with a Chanel jacket. I always mix things. All my life I’ve been mixing things – I make it like street, like normal, like the way you wear things. On that first cover of [American] Vogue for Anna [Wintour], you know, I put the Lacroix couture sweatshirt with the jeans. Do you remember this cover?

I always put jeans everywhere, you know, because… Adidas is a classic, jeans are a classic. I love jeans. Jeans are part of the real part of life. I mean everybody is always wearing jeans.

Was it hard convincing Anna Wintour to let you shoot a pair of jeans for that cover?

Noooo. No, you know, I was in Paris and I just said to her [the model Michaela Bercu], Here, put this on. I want the jeans. Me, I am very instinctive, I work with the guts. I don’t stand there for hours and look at a rack of clothes. I am not like that. I can’t. I can’t stand people who work like this. I can’t. Maybe I love this today, but tomorrow I love something else totally – I’m an outsider. I work totally different. I’ve never followed a trend in my life. You know, I’m driven by my inside, by my own sense of style, and I’m creating on the girl. I don’t do the same things on this girl and on that girl. I am like a painter.

What jeans are you wearing now?

This is…Ralph Lauren or…black jeans, I don’t know. This is my default – black jeans and my Chanel motorcycle boots. My favorite jeans are the ones that I wore in this picture for Steven Meisel (above). The Ralph Lauren painted jeans…I buy every pair that I can find. I’m obsessed with these jeans. And I love this picture. I’m wearing my Ralph Lauren jeans, my motorcycle boots, a men’s Prada jacket, and these are my little bags. I always wear my favorite bags that I designed for Chanel years ago, where I keep my lipstick, my glasses, my cell phone.

In the summer I wear these capri colored jeans…Gap. I wear jeans, or I wear my Adidas pants, that’s it. And I love Dolce & Gabbana embroidered jeans.

Do you still have the Ralph Lauren jeans you’re wearing in that picture?

Of course. And I never buy just one, I always buy three or four because I’m afraid that if something happens… 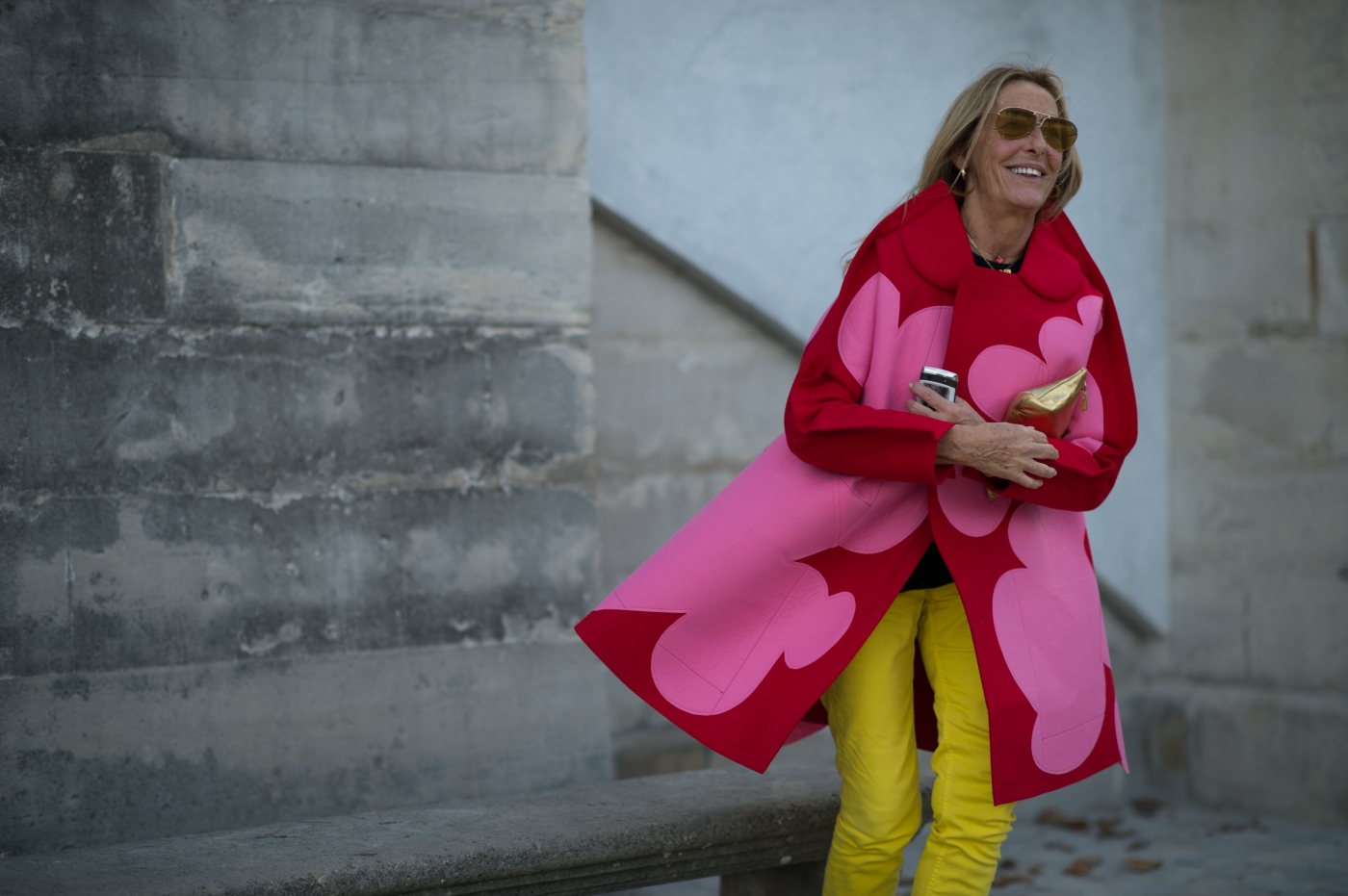 Hello, Yellow! The stylist in her favorite colored capris. Photograph by Adam Katz Siding of Le-21ème.com.

What do you always look for in a pair of jeans?

Has your preference for fit changed over the years?

You once styled Janet Jackson for American Vogue – the story ran in the September 1990 issue. In the pictures Janet is wearing her own Levi’s with Alaïa accessories – belt, gloves…do you remember this shoot? [see below]

Ah, Janet Jackson. I was arrested at customs for this. It was just after the show of Alaïa in Paris, and I flew the morning after to L.A. to shoot Janet with Herb Ritts, and I had everything of Alaïa, and it was a lot of snake and you are not allowed to bring snakeskin into the U.S. There was croc, I think, too. It was kind of awful of me, but I was stopped at customs and I just kept saying, “It’s fake, it’s fake, it’s fake!”  And I went straight to the sitting from there. Who was this one, the jeans she’s wearing?

They were her own jeans.

Did she come to set with these jeans on?

I don’t remember. I. Don’t. Remember. But we had a good time with her. Yeah, but, the jeans mixed with Alaïa, j’adore. I forgot this one. Per-fec-tion!!!

Here, a flashback to some of Carlyne’s colorful denim moments… 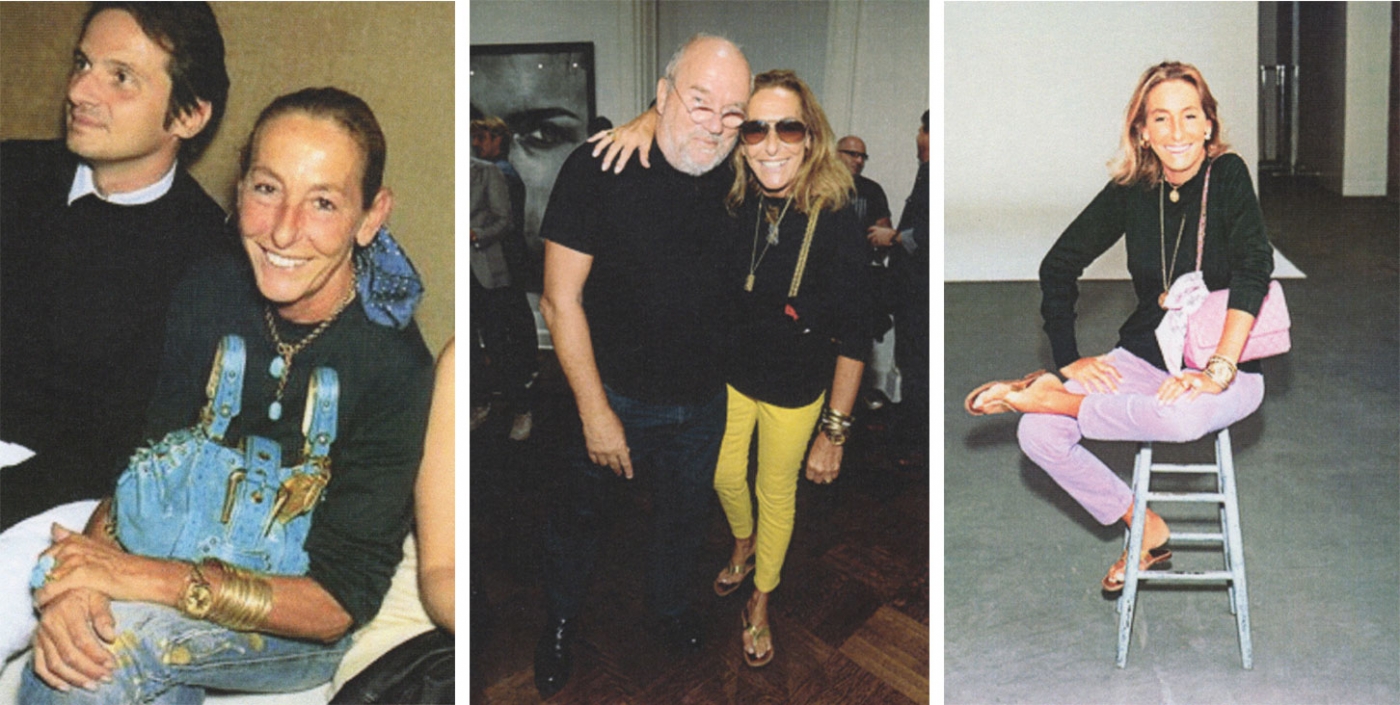 On the cover and in the pages of AmericanVogue… 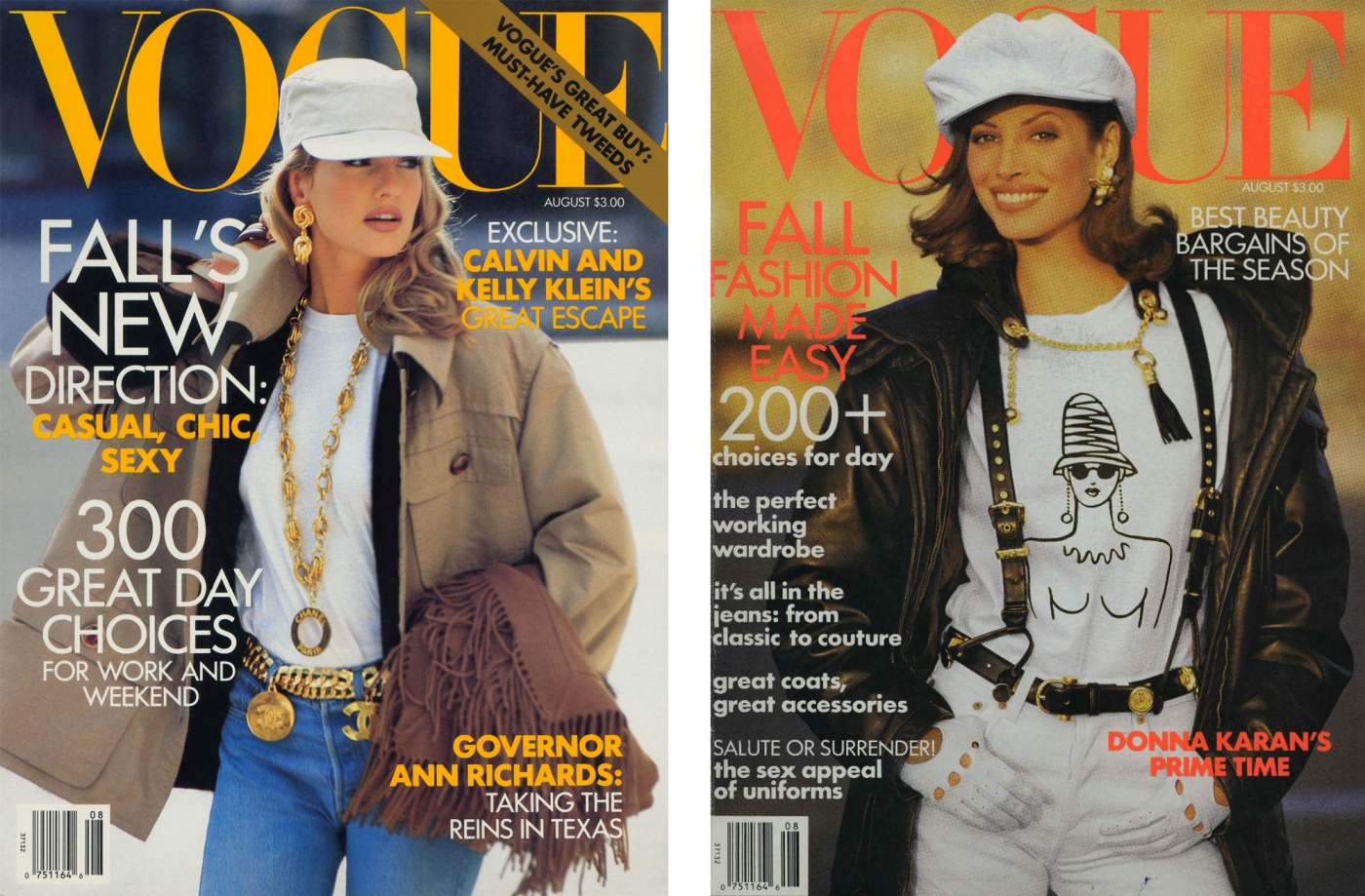 LEFT: Carlyne put Karen Mulder in Guess by Georges Marciano jeans with a Gap tee, August 1991. The necklaces, two of which are shown as belts, are Chanel. Patrick Demarchelier / Vogue; © Condé Nast.

RIGHT: Christy Turlington in Levi’s, February 1992. “I remember when I found this t-shirt, I was obsessed,” says Carlyne. “I play. You know, I always play. And what is better than jeans and a leather jacket? NOTHING!” Arthur Elgort / Vogue; © Condé Nast. 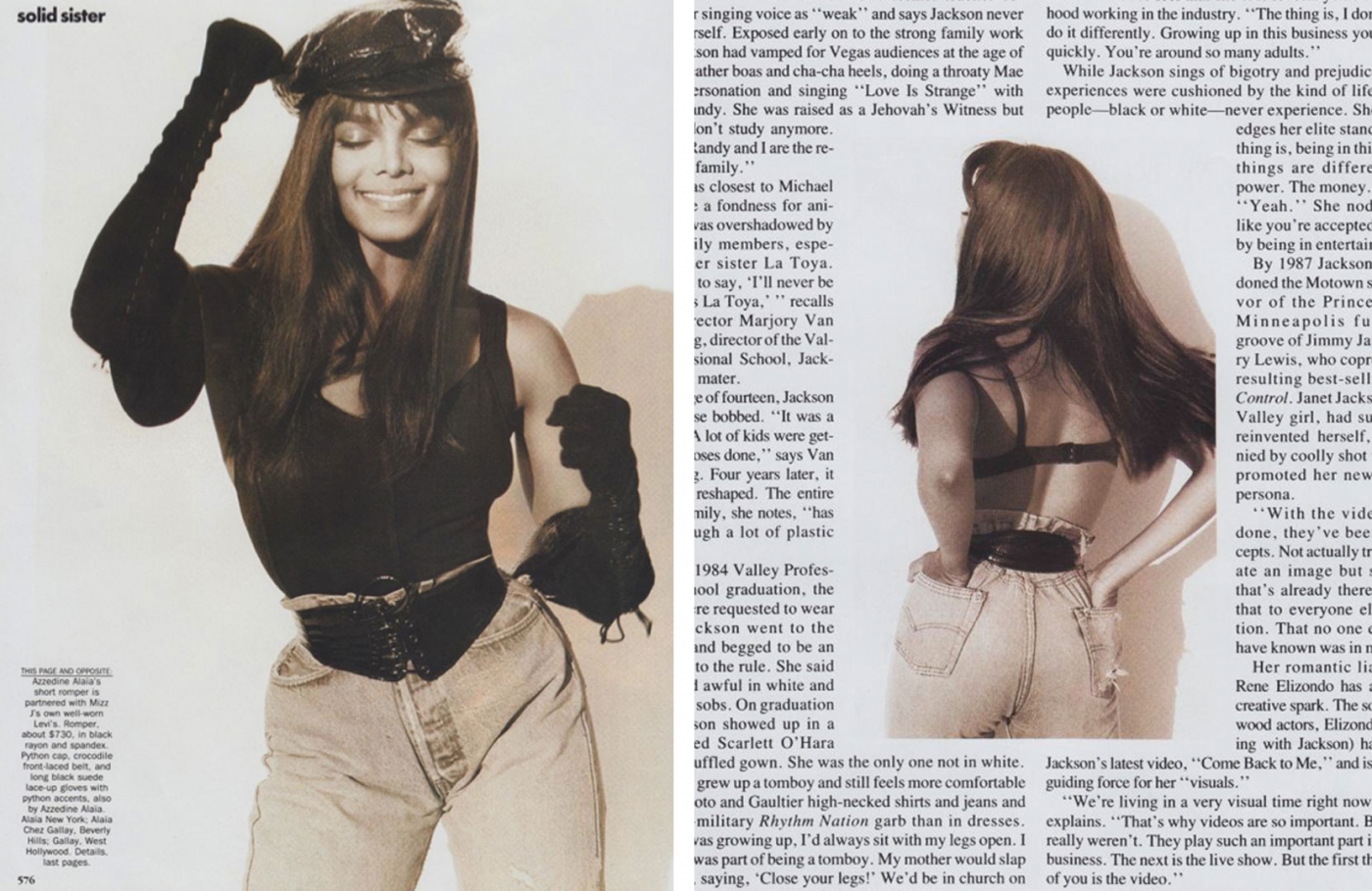 ABOVE: On Janet Jackson Carlyne mixed Azzedine Alaïa accessories with the pop star’s own Levi’s, September 1990. “It was just after the show of Alaïa in Paris, and I flew the morning after to L.A. to shoot Janet with Herb Ritts, and I had everything of Alaïa, and it was a lot of snake and you are not allowed to bring snakeskin into the U.S.,” she recalls. “It was kind of awful of me, but I was stopped at customs and I just kept saying, “It’s fake, it’s fake, it’s fake!” Photographs by Herb Ritts. 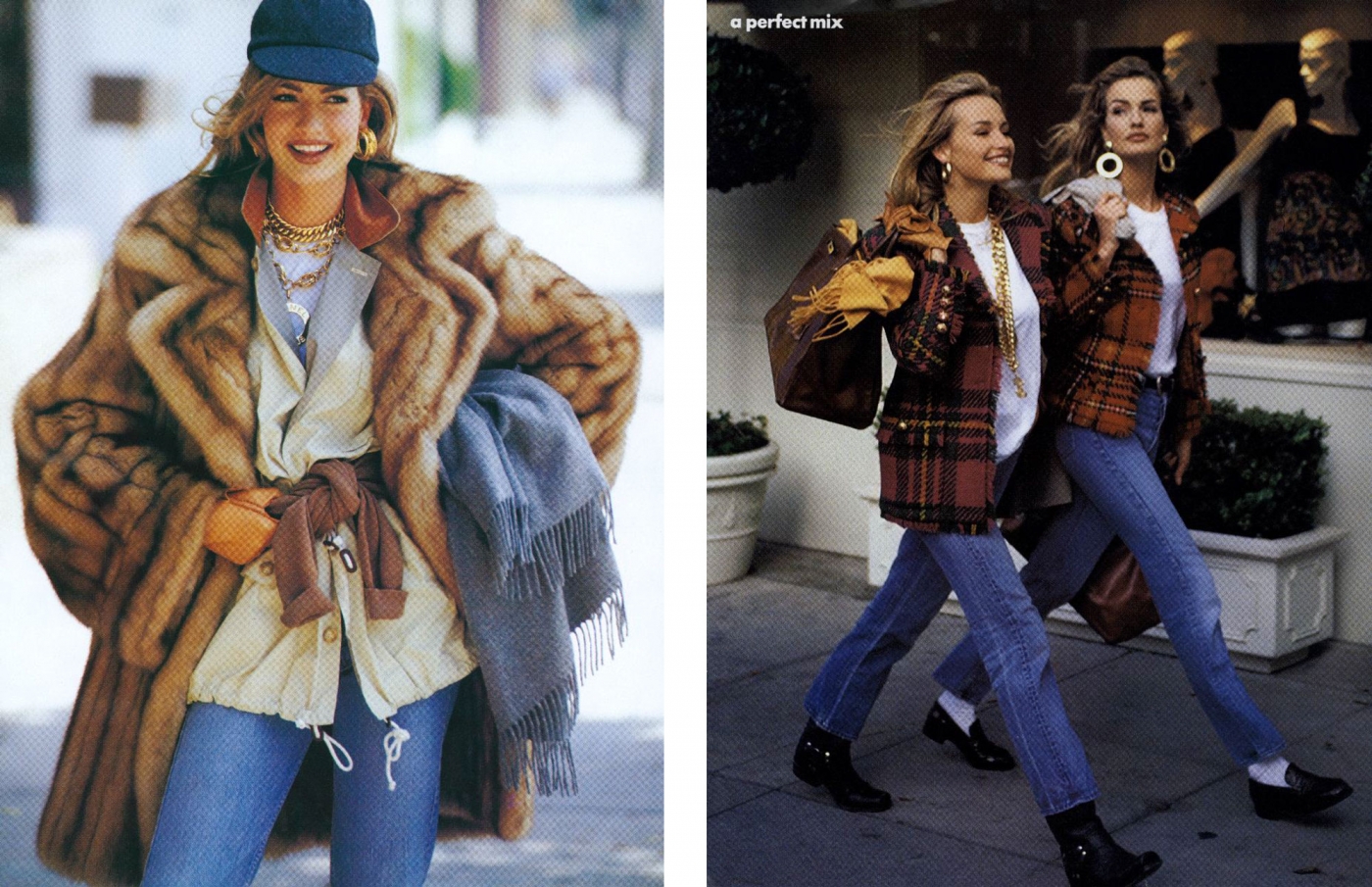 LEFT: Karen Mulder in Guess by Georges Marciano jeans, a Gap tee, and a sable coat by Valentino, August 1991. “This one – we did it in one afternoon, bang bang bang, and we shot it. It was all my own shit that I brought with me. BAM BOOM BAM BAM – and I call this street,” Carlyne says. “Women related to this.” Patrick Demarchelier / Vogue; © Condé Nast.

RIGHT: Karen Mulder and Estelle Lefébure in Vogue, September 1991. “I was the first one to put jeans with a Chanel jacket,” she says. “You know, I always mix things. All my life I’ve been mixing things – to make it like street, like normal, like the way you wear things. At the time it was new to see the girls with jeans and Chanel jackets. At the time they used to put the fucking suit together all the time. I think in a magazine you have to show something to inspire women. The best compliment is when a women looks at a magazine and she picks a page, and she wants to look exactly the way I put the look together – she will pick this jean, and this jacket, and this shoe, and this bag, and she will wear it exactly like that. This is the best compliment.” Patrick Demarchelier / Vogue; © Condé Nast

LEFT: With her good friend Fran Lebowitz; CENTER: A sketch of the stylist in her favorite tangerine jeans by @donalddrawbertson; RIGHT: On set with Oribe and Eva Mendez.