How we found Josh – and his hard-loved Nudie jeans – is a story all its own.

It began with Kelly Connor, the stunningVogue editor who oversees all of the denim for the magazine, and who chose to wear a pre-worn pair of Nudies for her recent Love Story with us. Out of Kelly’s story came an obvious question: who is it that wore those jeans to bits before she adopted them? She had been told that they’d belonged to a guy from New Zealand – all of Nudie’s styles are technically unisex – and that he’d lived in them for about three years. Would Nudie’s press officer, Ruari, be able to locate the previous owner (who we quickly dubbed her Denim Donor), we wondered? And if he could be found, would the DD be willing to talk to us?

Cut to a few weeks later and there we were Skyping with Josh Pickersgill-Brown, 24, from New Zealand. Yes, those had been his jeans. Yes, he’d love to tell us all about how they got so gorgeously thrashed. In fact, the story of Josh’s Nudie jeans was pretty well documented on Instagram already, and actually, it’s Instagram that Kelly can thank for helping her procure possibly the best shredded boyfriends ever. Follow @pistolkeith. And may we all be so lucky.

Before we get to the jeans, let’s talk about you and where you’re from. We know you live in New Zealand…whereabouts?

I’m in Christchurch, in the South Island. Three years ago, February, we had a pretty big earthquake and now half the city is gone. We have all of these cracks in the walls. Everyone is living in broken houses. I was born about five hours south. But I moved up here in 2000, when I was ten.

What do you do there?

At the moment I make coffee – I’m a barista. But I really like beer. I make my own beer, so I’ve applied for a job at a brewery.

That’s cool, what kind of beer do you make?

I’ve got four batches down at the moment and they are all for my wedding. I’m getting married in January, and I’m going to make all of the beer for that. So I don’t have to buy any, which is cool. I’ve got a Hefeweizen and a German wheat beer bottling at the moment. I’ve got an American pale ale, I’ve got an India red ale, which is a clone from a craft beer they make here in New Zealand. And I’ve also got a half-India red ale that’s more like an American pale ale.

That’s awesome. So you love beer and Nudie jeans. 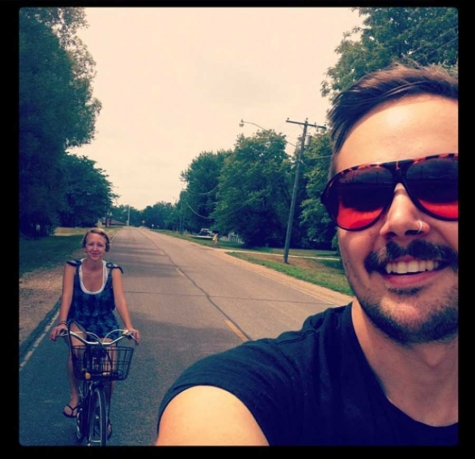 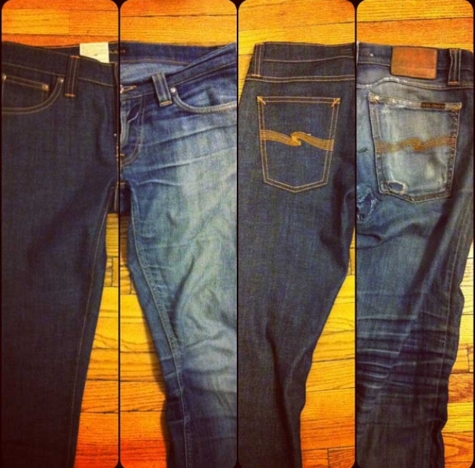 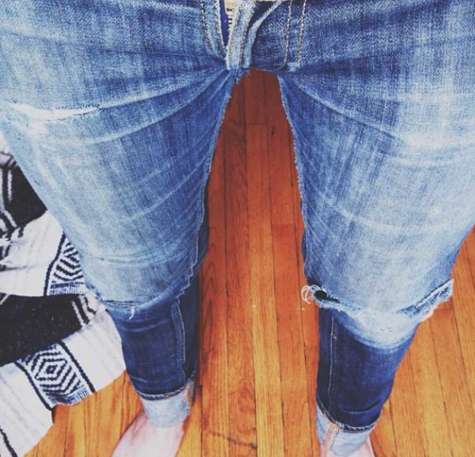 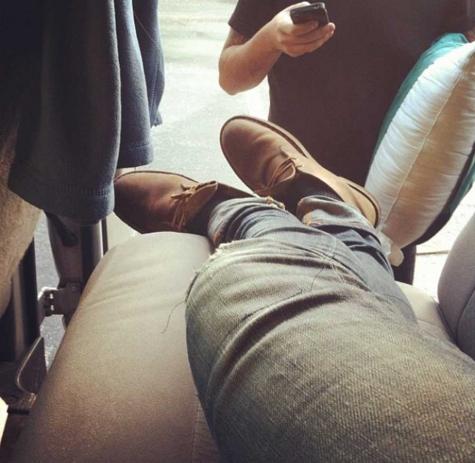 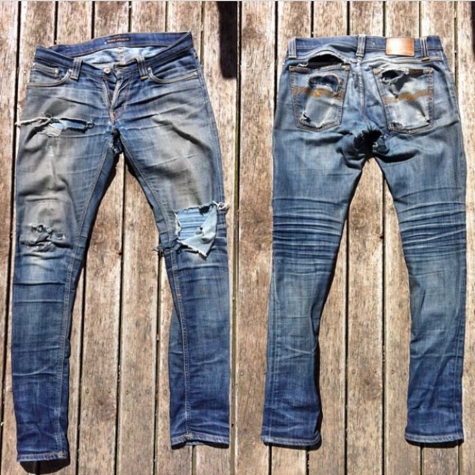 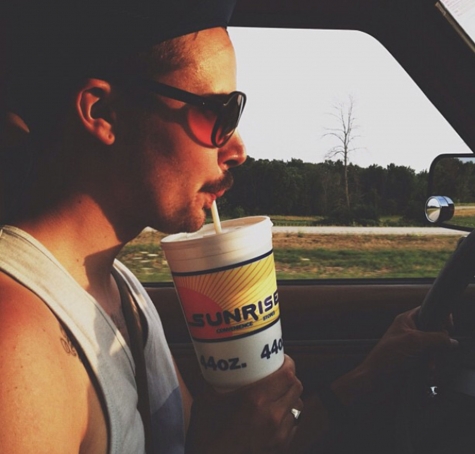 We know that your old Nudies have found a new home, with Vogue‘s denim editor Kelly Connor. Is that weird for you?

When I heard that about my jeans, I was like, that’s odd, yeah. I hope they didn’t smell too bad [laughs].

We’re so curious to hear about how they found their way to Kelly. Please, start from the beginning.

From the beginning, OK. Those specific jeans I probably had for two years, or so. They were my third pair of Nudie Tight Long Johns. I bought them in America and wore them literally every single day for two years (washed them once, maybe twice in two years). I wore them everywhere.

I probably bought them online. Maybe from Cultizm.com. I would have been in the United States when I bought them. For the last five or six years I’ve been back and forth between the States and New Zealand every six months – six months there and six months here. I work in the music industry over in the states, so I would go over there and do the summer touring circuit. I would go over there and do that and then come back home, save money, and go back and do it again.

What is the touring circuit?

For bands, I do tour managing, everything from merchandise, to drum kit, to video and lighting. Basically I do it with whoever or whichever band needs someone. It’s all word of mouth. I am sometimes like the mother of the band. Just making sure they get where they need to be. And I just sort of do whatever the bands need me to do.

Have you heard of Warped Tour? It’s like a summer festival that goes around. There are, like, 46 shows around the country in two months over the summer – bands like Blink 182 got big from the Warped Tour – it’s like a big summer camp. So much fun. I’ve done that three times. And that’s actually how I met my fiancée, Emily.

What does she do?

When we met she was managing the tour fleet of the buses. She was managing my bus and she got me a job on the tour when I was living in Australia…and now we’re getting married in about 20 days.

And were you wearing those Nudie jeans when you met Emily?

Probably. And doing Warped Tour – that’s probably how they got to be what they were when Kelly got them. They were just absolutely thrashed in the elements, going through snow, going through heat waves, crouching and pulling equipment into trailers and running carts through dirt, sleeping in passenger vans, and picking up boxes…it just thrashed them.

How many tours did those jeans do?

Probably at least maybe five or six. I went around the United States at least five times, California to California, in those jeans.

We’re so curious as to why you would give those jeans away, when they’d been through so much with you.

Well, there was this competition through Nudie Jeans L.A. It was called “The Best of the Broken In.” I had known from the beginning that Nudie was all about not washing them for however long you really want to, and that they’ll build character with the way you wear them, and they’ll form around you and reveal your personal character. I remember when I first heard that I was like, that’s awesome, that’s so me, and that is so something that I would love to do. And I just love that these jeans…you’re never gonna get another pair of these, you’re never gonna get a pair that look the same because this is the way that I wear them. And ever since I heard that I’ve just loved Nudie, I love that side of it.

The competition was this: They’d give you a brand-new pair of jeans if you showed them a picture of your jeans on Instagram using their hashtag (#bestofbrokenin). If you won, you would send your jeans back to them to go on a tour around the U.S. So, they picked me – I’m @pistolkeith – and they said, Send your Nudies in and we’ll send you a new pair. And that’s about it.

Was it hard for you to part with them, once the day came?

Yeah, I was hesitant to send them in because, well, another kind of backstory is this: The pair I had before those ones, which once again I destroyed, Emily made into bow ties. She cut them all up and made bow ties, and in the center of the bowtie was the belt loops. Nudie Jeans L.A. was giving them away with jeans for a while…

But just the general idea of sending my jeans back and having them go back to Nudie and be part of an exhibition – I thought that was pretty cool, so I went with that this time. 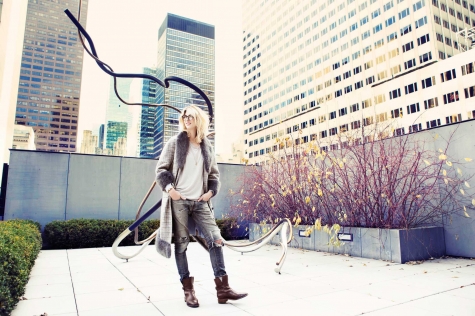 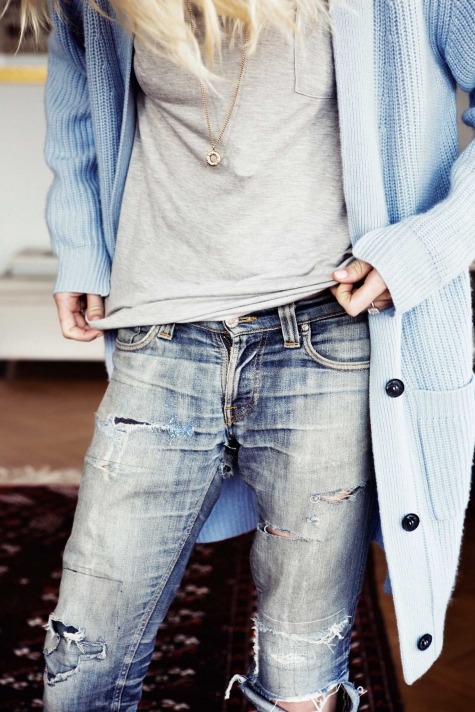 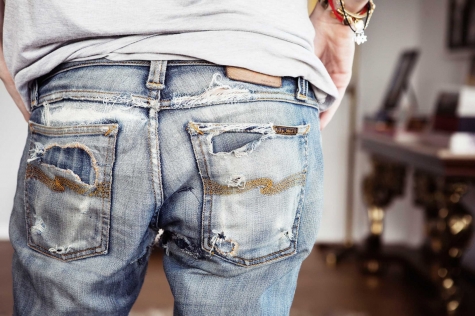