“Jane – please meet Jason Denham, the Jeanmaker. There are very few people I respect and admire more in our business than Jason, and as far as building brands, making great jeans, and loving denim – he’s pretty exceptional. With any luck you can connect and the rest will be history.”

Just before our trip to Amsterdam, Scott Morrison of 3×1 sent Jane this email with Jason in cc. We knew of Denham, Jason’s jeans company, and that he had a reputation for being a real denim designer’s designer, a man whom everyone from Adriano Goldschmied, to Jane’s dad Ron [Herman], and now Scott raved about about. Let’s say this: We weren’t leaving Amsterdam until we met him. But that we got to spend quality time with him in his stores and studio – a gorgeously cluttered room above the Denham men’s shop in a canal house in the city’s chic Nine Streets neighborhood – was a treat beyond. Thank you, Scott, for the invaluable introduction.

Jason started Denham in 2008 intending to destroy industry convention, make great jeans, and create a company culture that could tell big, meaningful stories about the people and process behind his product. If you Google Jason today you’ll find a rabbit hole of blog-devotion for Denham to go down – denimheads from Amsterdam to Tokyo just love it. But in our parts of New York City, the man and the exquisite jeans he makes are still relatively unknown and hard to get your hands on. There is no Denham store in the U.S. (he has four in Amsterdam, one in London, and two in Japan), and e-comm environments can hardly capture that culture we were talking about (though, you can shop on Denham’s own website for jeans and more).

During our visit to HQ, where there’s a bathtub in the garden for hand-washing customers’ own pairs, a sewing room for repairs, and hundreds of vintage scissors, Jason’s personal collection and the company mascot, we came to understand what makes Denham, jean and Jeanmaker, so special. Take Jason’s own, for example: “They are the Drill VJS (virgin Japanese Selvedge), Red listing with 8mm seams from our category 5 line, which is the Denham signature 5-pocket, with the scissor embroidery on the back left pocket (there are exactly 691 stitches in every scissor), full-lined back pockets, and an interior that is tailor-made and trimmed with 8oz fishbone-worked cotton,” he told us. We rest our case.

How long have you had the jeans you’re wearing now?

One and a half years, and I’ve washed them twice, I think.

Washing is a big deal at Denham, we see.

Yeah, we wash our jeans here in the garden at the store. We’ve developed a beautiful soap that has no perfume and no chemicals. It’s made of just pure natural enzymes. We’ll wash the jeans here for our customers with cold water, which keeps the beautiful character of the fabric. And there’s a bathtub down in the garden – and the guys do the washing on a Saturday.

Why is the way people wash their jeans so important to you?

We have this whole thing about sustainability. For us, sustainability is about longevity. We encourage people to take care of and live in their jeans – to make them beautiful. You know, buy less, but maybe spend more money on something that lasts – that is being sustainable.

So when is it time for someone stop wearing a pair of your jeans and buy another?

Here, I’ll show you…[he goes to get two pairs of jeans buried in the back of his office]. This is a pair that was unwashed from one of our guys, a DJ here in Amsterdam. He wore them every day, and they’ve just been worn to shreds. We have tons of these jeans in our archive. When they get like this, I guess you stop wearing them. 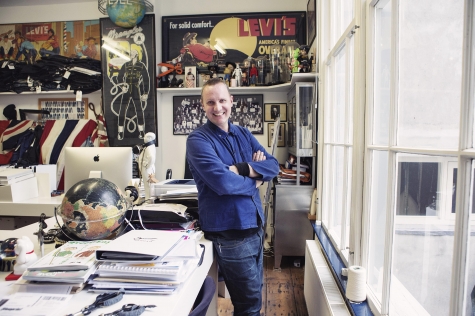 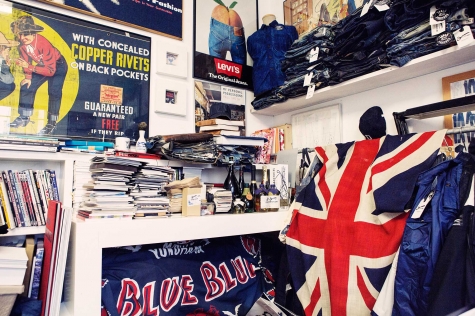 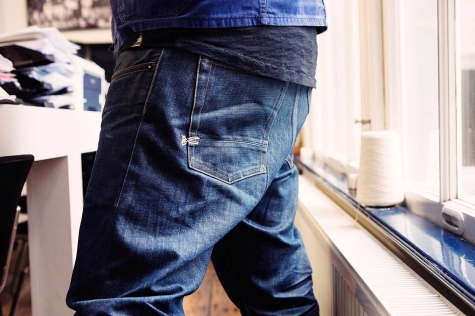 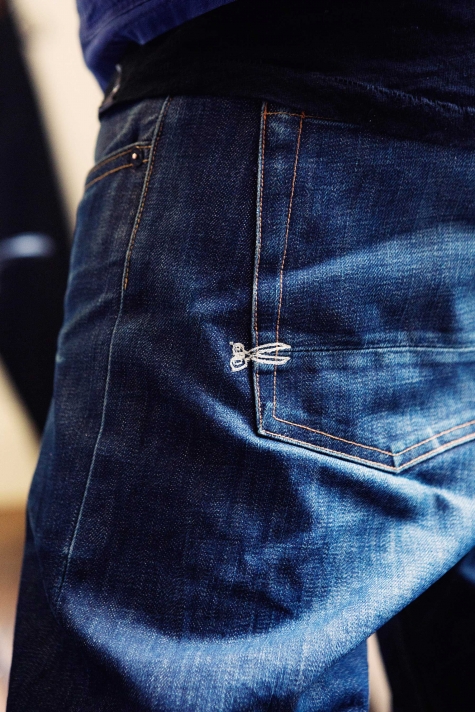 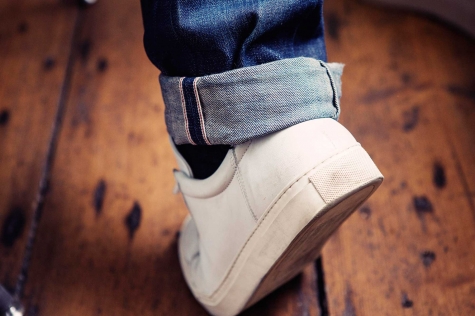 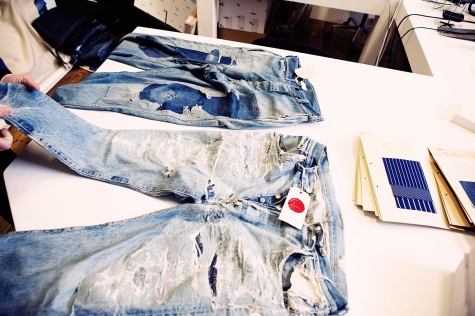 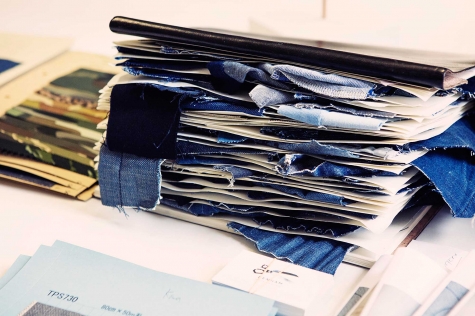 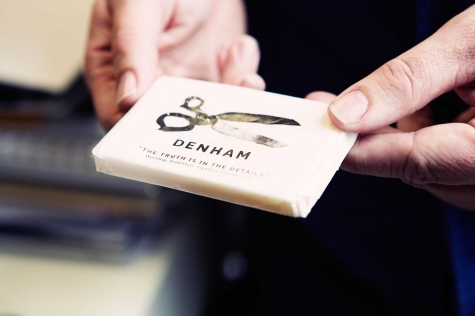 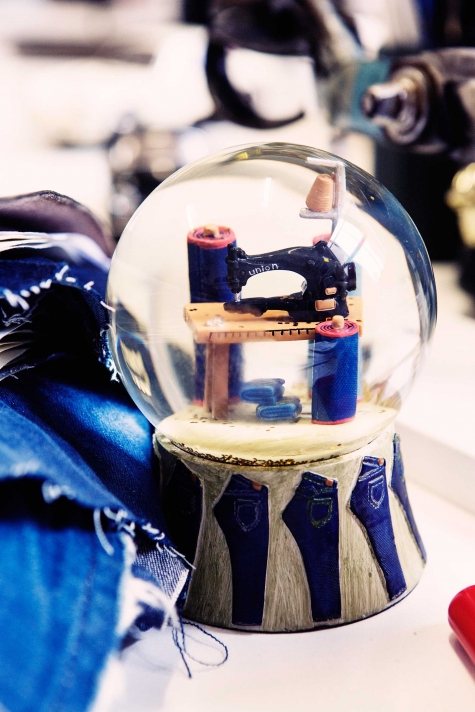 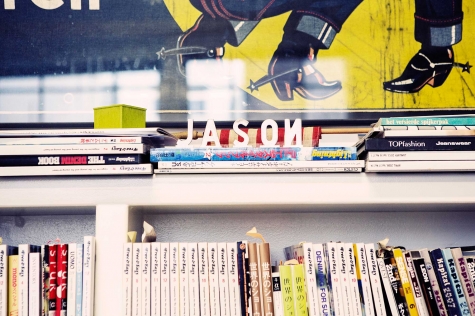 What do you see happening in denim today?

I really only get one word? Timeless.

Finish this sentence: In my jeans I am…

Tell us how you got started making jeans.

I studied design in England, in Manchester, and when I left the University I got my first job – I had a really cool job as an intern for a really amazing designer called Joe Casely-Hayford and he had a project with U2. He made all of the jeans for Bono and the Edge, for the stage. It was crazy high-level stuff, jeans that cost thousands of pounds. The whole collection was based on a deck of cards, and so I would spend the whole night nailing rivets in the jeans in hearts and clubs and diamonds and spades. I’ve still got a pair of my own from that project. It was a great lesson. Then I moved to London to design jeans for Pepe, which was great schooling, and then I moved to Amsterdam and I started my own jeans line called Blue Blood. And then I started Denham about six years ago.

What does Denham stand for?

When I started Denham, I said it had to be about people, product, and presentation. So I tried very hard to hire good people and make great product, and I think it’s really about storytelling. Like, here’s a really freaky story – when I started doing retail and opening stores, I fell it love with it. An auntie of mine called me about six months ago and said, You realize that your great grandfather was a retailer. And I didn’t realize that – but he was called John James Denham, and he had confectionary chocolate stores called JJ Denham. And when I saw this [pointing to a photograph of one of his grandfather’s stores in his office; see below], I couldn’t believe that his font and the way it his signage is done is so similar to my own. I mean, it’s almost exactly the same.

Plus, the fact that your last name is Denham, pronounced like denim…

Yeah. I just had a baby, and when we were thinking of names for her, I thought, Wow that would be really bad if I called my kid Blue or Jean. Blue Denham? Jean Denham? We can’t do that. We named her Jasmine. 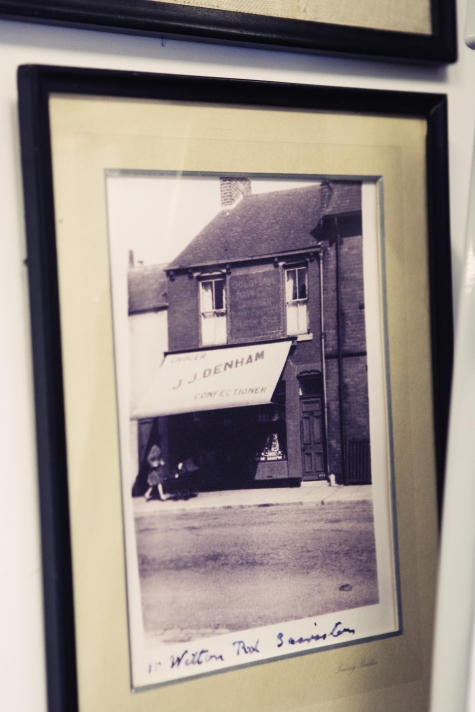 To read more about denim in Amsterdam, see our Diary. Plus the Stories: Maison Indigo’s Recycled Denim Pets, Remco de Nijs, the Star of G-Star Raw, and The Jean School, Too Cool.