“You know, I’ve been wearing jeans for 60 years, since I was six,” said Linda Rodin as she welcomed us into her Chelsea apartment. We hadn’t yet taken a seat before Linda, the stylist and skincare entrepreneur whose eponymous line of luxurious face oils is loved by every lady we know, launched into her story, from the Landlubbers she wore in the 1960s, to the Derek Lam wide legs she had on that day for our shoot. “You can really wear jeans for the rest of your life and they will never go out of style,” she said. “Denim will never die. It can’t. It’s too classic.”

We couldn’t agree more, and couldn’t have been more impressed by Linda’s collection. She has it all – designer denim pieces from Comme des Garçons, Lanvin, and Junya Watanabe, contemporary skinnies from Rag & Bone and Acne, and a sprinkling of more sentimental items, like the Levi’s shirt she can’t remember life without. “I cut it so it’s all frayed. It’s a mess, but I love it,” she said, though we had a hard time believing that anything in Linda’s chicly cluttered, curated world (her apartment is all over the internet, Google it) could resemble anything close to a mess. Certainly, the Derek Lam jeans she wore belted crisply with a striped t-shirt and cork-soled platforms (purchased in Panama for just pennies) were the exact opposite of a mess.

It was a glorious summer day in New York City, so off we went for a walk across the Avenues to Union Square Park, taking Linda’s 4 year-old poodle Winky with us. Linda has a lot of plans for the future, we learned strolling cross-town, some of which involve jeans. And lipstick. But, first things – her story, which features appearances by Robin Wright, Bob Dylan, and Winky, of course  – first.

So, you started wearing jeans when you were six years old. Were you thinking about them as a style statement then?

No, no, not at all. I probably only started thinking about jeans seriously when I was 16 and Landlubbers came into fashion. I remember going to a store in New York – I grew up on Long Island – it was on Lexington Avenue and 60th street, and it sold wall-to-wall jeans, and I bought brown Landlubber bell-bottoms there. They were so great.

Landlubbers were a wide leg jean, almost similar to what you’re wearing today.

Yes. They were a little tighter up top, I think. But they were wide-legs like this.

What was happening in your life at the time?

I think I must have been a senior in high school. I would come into the city to buy jeans with my friends. We all just wanted to wear jeans. That was in about 1965. When I went to college, I was more into mini-skirts with tights and turtlenecks. I went to Ohio State, and then transferred to NYU, and I remember wearing a black-and-white houndstooth mini-skirt with purple tights and a purple ribbed turtleneck that I bought on 8th street.

In the 70s I decided I wanted to be a photographer. I had dropped out of NYU to work at an art gallery and for a magazine called Auction that doesn’t exist anymore. I started working for a still-life photographer, but then I thought I’d rather do fashion photography. Every fashion photograph that I found and loved was by the same photographer; his name was Gosta Peterson. So I went to meet him. In those days you could do that. I’ll never forget going up to Gosta’s studio. I was wearing jeans. Bell-bottom jeans and this knit Peruvian coat – one of those coats that was very fashionable at the time, no buttons, but very heavy, and high-heeled shoes. Not platforms, but strappy sandals. Gosta’s studio was on 87th and 3rd and I lived on Morton Street, so it was a schlep. It took me all day. And when I got there I just sat on his stoop with my portfolio in my jeans and waited. Long story short, I waited a long time, and just as I was getting up to leave I see this gorgeous man coming around the corner. It was Gosta, and I said, Oh, hello, Are you Gosta Peterson? And he said, Yeah, come on up, you must be a model. And I said, No, I want to be a photographer. Anyway, I stayed there for about two hours talking to him. It was Friday night, and I said, Listen, can I come back on Monday? Can I come work for you? Do I have a job? And he said, Sure. It was amazing.

I worked with him for probably about three years. I was very lucky. He changed my life. And he’s still my best friend. 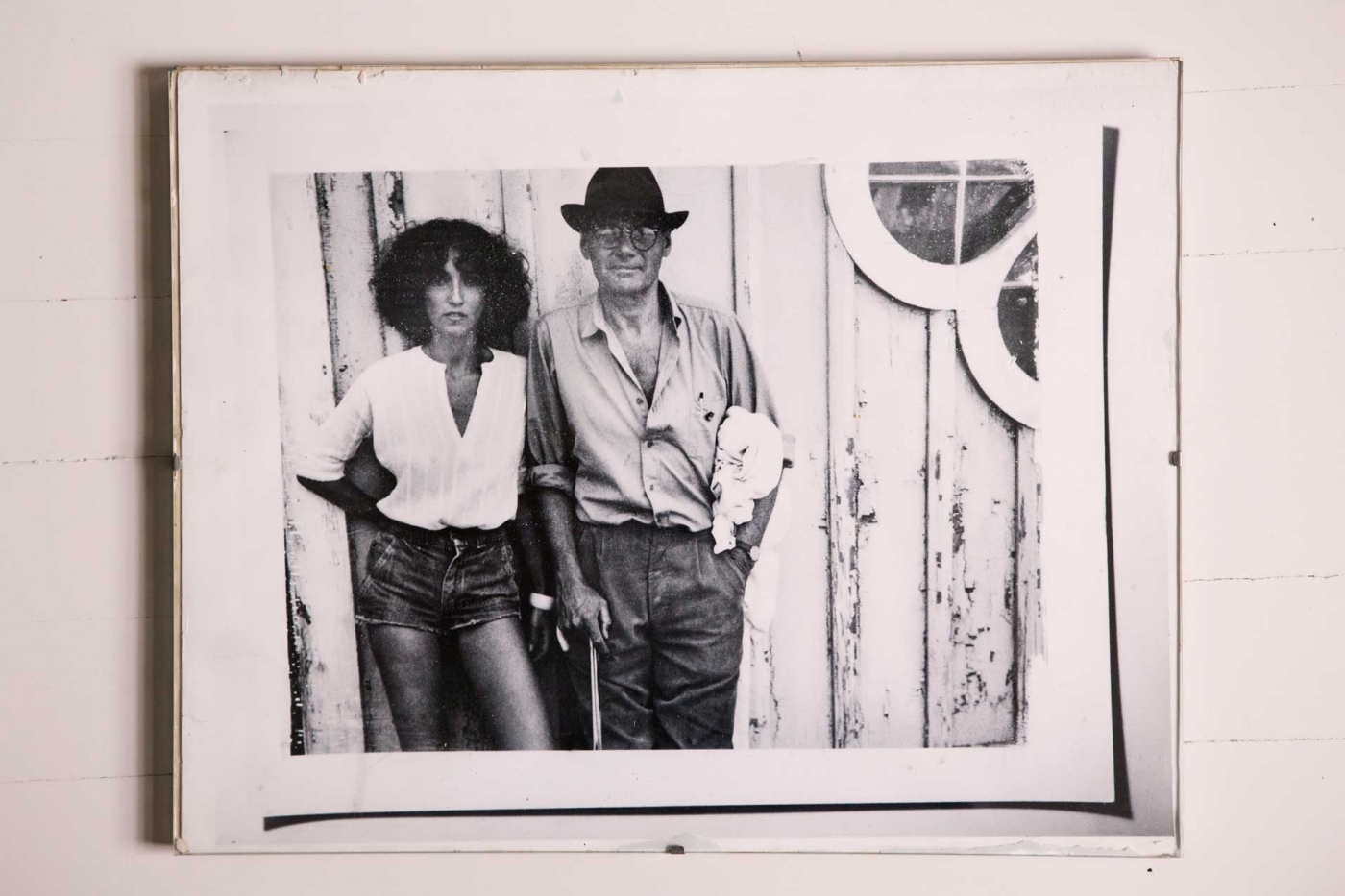 SHORT STOP Linda with her mentor and friend Gosta Peterson in upstate New York, circa 1975.

How did you transition from being a photographer’s assistant to a stylist?

Well, I started taking my own photographs, and one day my sister said to me, You know, you really can’t take very good photographs, but you do get great clothes. I thought, Ok, what do I do with that? There were no stylists back then. Years later I realized styling was a job. But after realizing I didn’t want to take pictures anymore, I opened a clothing store in Soho on West Broadway. This was in 1979. It was the first store in Soho, and it was called Linda Hopp.

Where did the name come from?

Gosta was a big Jazz fanatic and he called me Linda Hopp, like the Lindy Hop. That was my name.

What did you sell?

I designed some clothes and I sold collections. No jeans. It was more about early 80s sportswear. We had sweaters that looked great with jeans. It was very Bauhaus, designed by my architect brother Robert [Rodin]. And I had a shop-in-shop in Bergdorf Goodman called the Hopp Shop. But it just fell apart. I was only in business for one year.

So then what did you do?

Well, then I tried to become a stylist. One thing led to another…I got a job at Harper’s Bazaar, I started working with Bendel’s. But I didn’t like going to the same place every day. I’ve always preferred being freelance. So I styled, and then eight years ago I started my beauty line, and that’s pretty much all I do now.

[She gets up to get Winky a toy]

The other night I was watching Robin Wright on Jimmy Fallon, did you see it?

Well, she came out in a pair of light-wash jeans, rolled up, with these funky boots and a white tank top and a man’s striped vest and a big belt. And she looked amazing. I always think, What would I wear if I were going to go on one of those late-night shows? Jeans! Why not? I’m always threatening to get myself a denim tuxedo. I don’t need one. But one day I will get one. It would have to be a very tailored, very fitted, pants like the ones that I’m wearing now but with a satin stripe down the side.

Will you let us know when you do that because we would really love to see you in it.

What do you love about the Derek Lam jeans you’re wearing now?

They’re really more like trousers, and I just feel very 1940s in them. I love the dark denim and I love that they’re not creased. I have to have things tailored a lot, but not these, these just fit me perfectly.

We know you do everything in your jeans, but is there anything you wouldn’t do in those?

I probably wouldn’t run around the city in these since I think it’s best to wear them with a higher shoe. I wouldn’t want to be on my feet all day in these. Otherwise I’d wear them anywhere.

Click on an image to scroll through Linda’s story 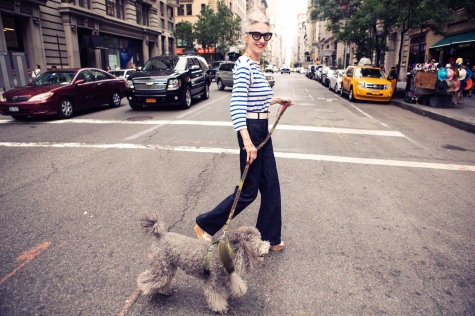 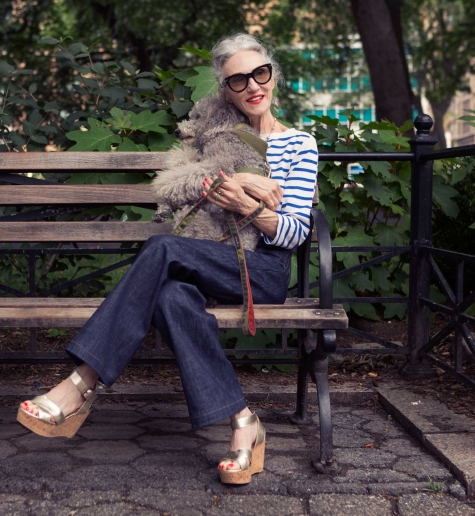 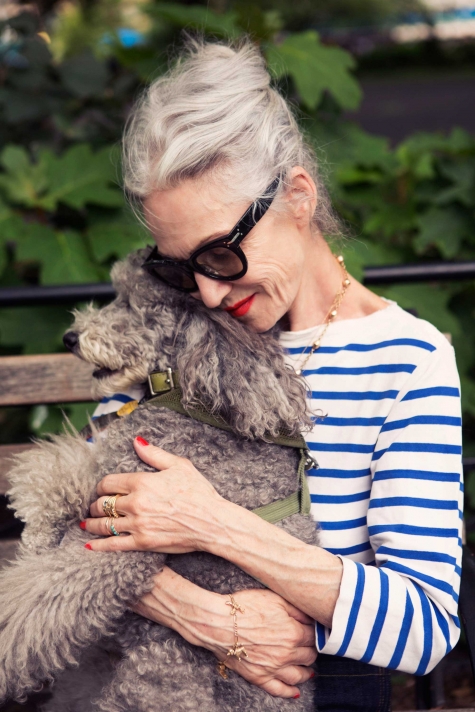 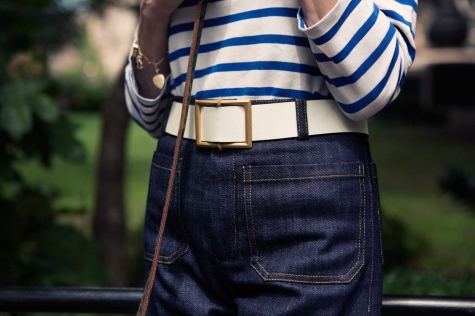 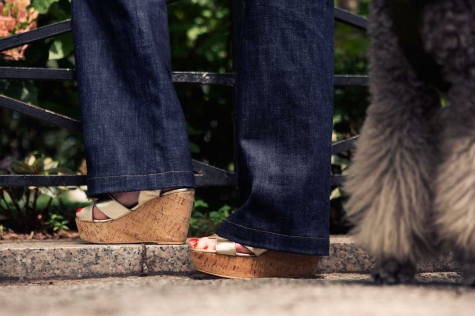 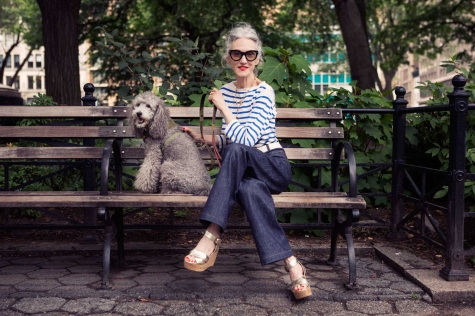 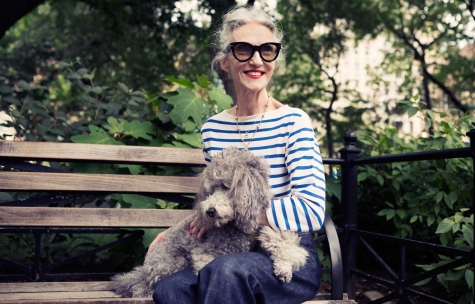 What do you need your jeans to be, always?

If your jeans could talk what would they say?

What’s the most memorable place the jeans you’re wearing have been?

I just got them, so they haven’t been many places.

What’s the most memorable place you’ve been wearing jeans?

Everywhere. I’ve worn jeans everywhere. I once did a shoot with Bob Dylan wearing jeans.

In Venice, Italy. It was probably about 10 years ago and it was for a Victoria’s Secret campaign and the whole thing was sort of ridiculous, but it was great. Was Bob wearing jeans? He must have been. Yeah. He was very quiet and very focused. One of the things he requested was a big Russian hat, and so I looked all over the city and got him one and he took that. But he really wore mostly his own clothes.

Do you have a favorite Bob Dylan song?

Adventures in Denim with @LindaAndWinks

THE LOVELY LINDA On Instagram in some of her favorites – including the Levi’s shirt she’s had for as long as she can remember (center) and the jean jacket that got away (bottom right).

Did you ever have a pair that got away?

No, but a denim jacket of mine got away and I’m just sick about it. I bought it in L.A. probably 10 years ago. It wasn’t a traditional denim jacket. It was side-buttoned and gorgeous. I’m wearing it in tons of pictures and I cannot find it anywhere now.

Is there a pair that you used to wear that maybe you should have broken up with sooner?

Some of the stretch jeans, maybe.

If you had to replace all of your denim with something else what would it be?

Confused. I wouldn’t know what to wear.