Public relations expert Anita Borzyszkowska has worked in-house for denim heavyweights like Levi’s and Gap, and currently she does marketing and brand strategy for J Brand. Let’s say that with Anita, good jeans are a given. And yet, because she is one of those beautiful, rare birds who flies just left of the famous fashion flock (i.e. out of the street style photographer’s focus and away from the blogger’s beat) her collection hasn’t really been clocked until now.

After spending a morning with Anita at her New York home in Chelsea, we knew one thing: it’s not the quantity, or even the incredible quality of her denim (see the Junya Watanabe’s and rare Takahiro Miyashito multi-pocketed pair below), but the distinctive way that she wears all of her favorites – boyfriend-y, and with simple, interest-piquing pieces like a peplum top by Alaïa or a cashmere sweater from Céline, for example – that sets Anita apart. She makes pulling a look together seem as easy as breathing. And though her style is most definitely consistent, we wouldn’t say she wears a uniform – there are much too many surprises to call it that. Minimalist pieces, maximum chic, if we had to sum it up. See for yourself.

Before we talk denim, let’s discuss what you do.

I have my own business doing brand strategy for different clients in fashion, between London and New York. So, at the moment I work with the Japanese label Sacai and its incredibly talented designer called Chitose Abe. She’s had the line for about 14 years now, and I’m helping her with building her business, and I help her with press, it’s exciting. I’m also working with Marc Newson and Jony Ive on their curation of their favorite design pieces, which will show at Sotheby’s this month in New York to raise money for RED. I work with J Brand jeans and their creative director Donald Oliver. And, I work with Fabien Baron and his agency in New York. And, oh, I work with Matches, the retailer in London…

…And before that we know you were at Gap. You come from working at a company that’s really about denim…

Yes, and before that I worked for Levi’s for six years in London. I helped launch Levi’s Vintage Clothing, their line of replica pieces, in Europe. I worked for them for six years, and then I was VP of Global PR for the Gap for 12 years. So I’ve worked in denim in many different incarnations. It’s a recurring theme [laughs].

You must have seen so many denim trends come and go during that time. What’s happening in denim that excites you now?

I guess a certain level of inventiveness and surprise. I love what Junya Watanabe does. Sacai works with denim, too, and I love the Japanese sensibility of taking something that is incredibly authentic and pure and adding an element of surprise to it. And I guess like any woman I love the idea of great fit, which you get from J Brand…the simplicity of it. What gets me excited in denim are two very polarized ideas, actually – one where something is very played with and the other, like J Brand, is about ultimate simplicity. So, no trickiness or overt stitch details, just something incredibly pure and simple that to me becomes a great base for fashion pieces.

When you talk about great fit, what works for you, personally?

I love the figure-flattering idea of a high-waisted silhouette, but I guess I’ve always gravitated toward a boyfriend jean. I love the slouch and the ease of a boyfriend, and the fact that you can put it against a flat or a heel. It works in many different environments. I love that, the fact you can just throw it on.

No. For me and my body shape, I just don’t think skinnies…you know, people create incredible things with skinnies. I love the Photo Ready from J Brand, but it’s not my sensibility. I love slouchiness. It feels louche and elegant. I just feel like I’m wearing somebody else’s clothes when I have skinny jeans on, if I’m honest. I tried them, but it doesn’t feel authentic to me. 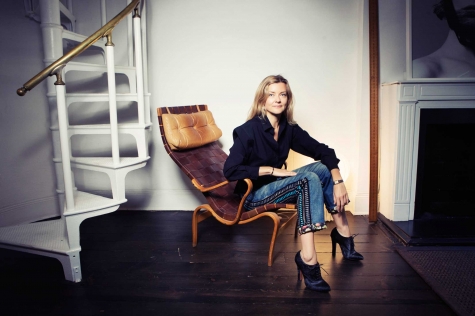 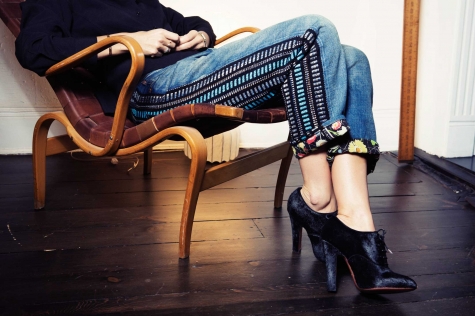 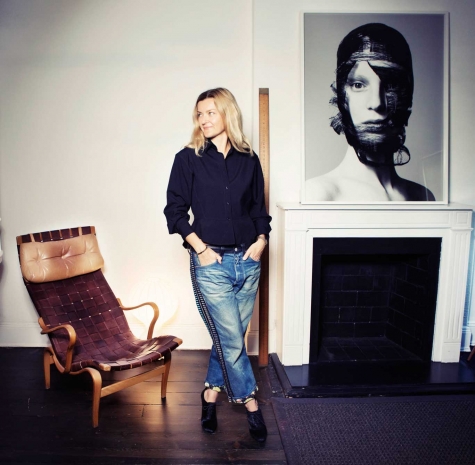 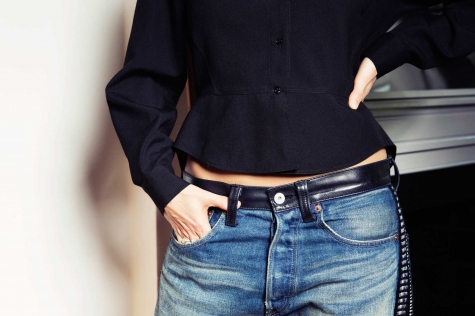 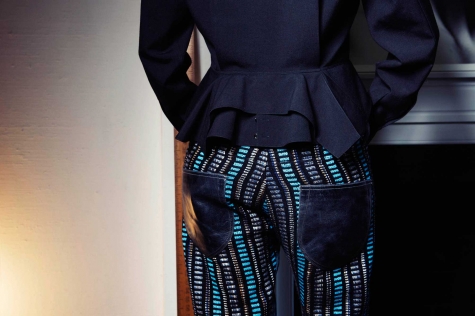 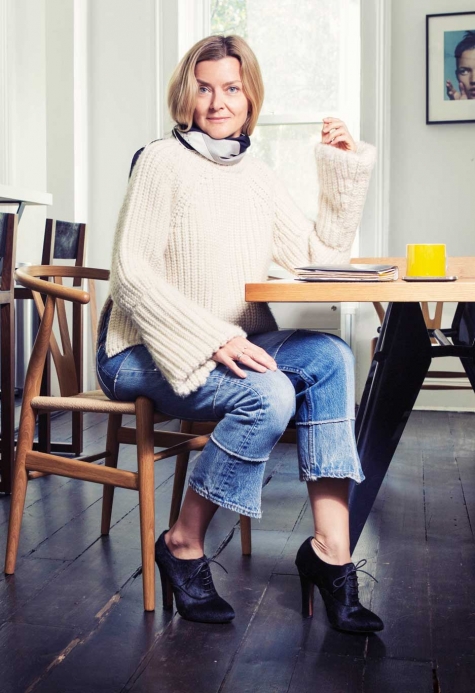 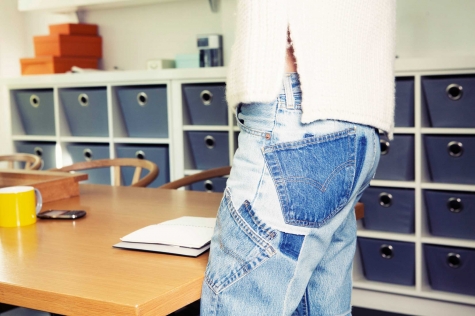 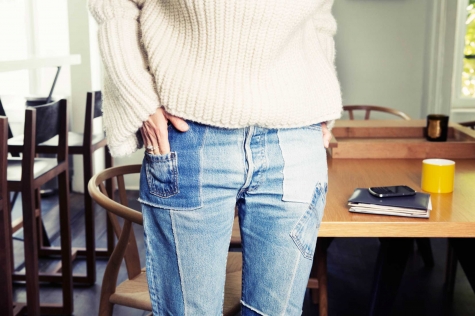 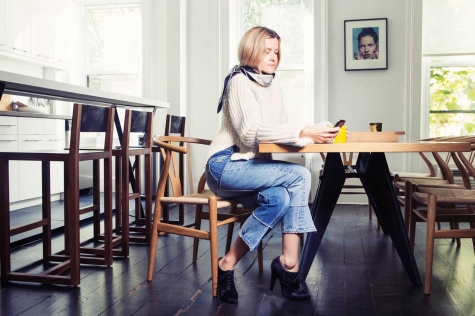 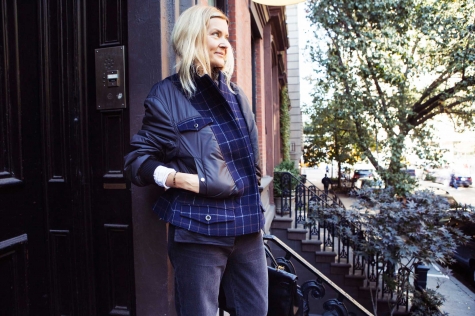 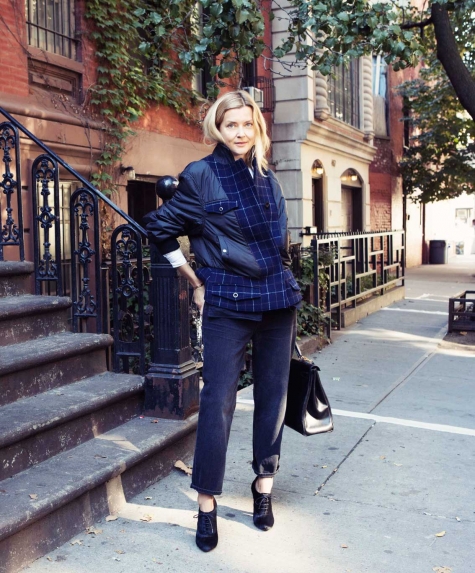 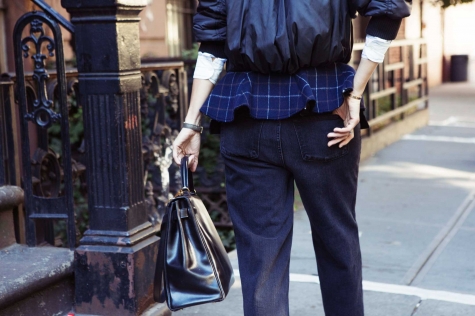 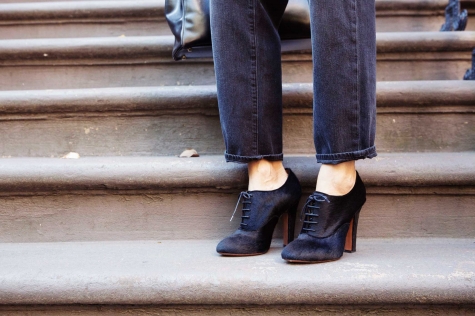 Can you reminisce a little bit about some of the trends that you’ve seen in your career (including the ones you loved and those you were happy to see go!)?

Well, one of my favorites is a pair of Levi’s that they made for their 125th anniversary in 2002 when I was working there. They only made 125 pairs of them, and they were a replica of the original Levi’s jeans. They had one pocket, the cinch on the back, the capital E in Levi’s [ a marker of jeans made before 1971, when the brand switched to the lowercase “e”] on the back tab…I still have those. I cropped them really short so they’re above the ankle, and I’ve washed them loads so the finish on them is really incredible now. That’s a pair of jeans that I know I’ll have forever.

I loved J Brand’s Love Story at the time because that was a shape that I’d never really worn and that I’d never really had before. So I wore that. I also had a similar pair of jeans from Balenciaga. I talk about a boyfriend jeans, but there’s something really great about a high waist that’s very small on the waist, narrow on the hip, with a wider opening at the bottom. If you wear that with a heel, there’s something that makes like your legs look on forever. I like that look. I love denim shirts. I’ve never been a denim jacket wearer but I love denim shirts. So I have a couple of really shrunken Sacai ones with these beautiful splits and a satin insert and a ribbon at the back.

You know what’s interesting? The 80’s, that was the time when girls used to wear this great look in London: an Alaïa bodysuit with a really oversized men’s 501. That was really fantastic. One of denim’s finest moments. And it was all about the 501. Nobody wore a jean other than a 501.

Nobody did. I say nobody, and it’s a grand statement, but really it just felt like everyone wore Levi’s at the time. I guess it was the Nick Kamen moment, with the 501’s. Did you have that here? There was this really seminal ad campaign – Levi’s always used to do these big TV campaigns – with a model called Nick Kamen. He was at the laundromat, and a Marvin Gay song was playing, and he took his jeans off and put them in the washing machine. And he was just there in his boxers. Literally, when Levi’s campaigns used to break there was front-page newspaper coverage. Before digital, as brilliant as it is now, information was less scattered and disparate, and there was only one way to get your information. It always moved in one direction, and then it always became big news.

Was the video considered scandalous at all?

No, there was a sexines to it. It was a moment in culture that people responded to. They weren’t interested in scandal it was more, I mean…I guess at the time in the UK you had four TV channels, so everyone watching television saw it. Trends and information were much more focused – you would have bigger movements and tribes behind particular looks. So in London, there was a particular movement in fashion. All across the UK and Europe with the 501 thing. That was a really interesting moment in denim. It was really a thing.

And then I guess the next movement was when the L.A. brands started responding to that. The 501 was always about an anti-fit, but L.A. brands responded with something that was figure-flattering and all about a woman’s shape. They had a femininity to it. That was in the early 2000’s – Seven, J Brand – and that was the next big movement.

You work so closely with one of the biggest brands in denim, so you must have a sense of where denim is going. What’s next?

You know, I think it’s gotten to a point now where women’s repertoires are much broader. It’s definitely not the time it used to be, where something was of-the-moment and everything else is not relevant anymore. Now, boyfriend and skinny and high-waisted pants are all part of everyone’s wardrobe; they’ve become the norm. What are the new ideas? I think jeans that have a more polished sensibility to them are coming back – like ones with rose-gold hardware, silk pocket linings – the idea that it’s a more luxe, dressed-up jean. And then it’s about different finishes on fabrics. So with J Brand, it’s about jeans that really feel great against the skin. Like their Stocking jean [available late February 2014], which literally feel like a pair of stockings. I think customers want to be comfortable. I think now they don’t want to compromise on how great a jean feels.